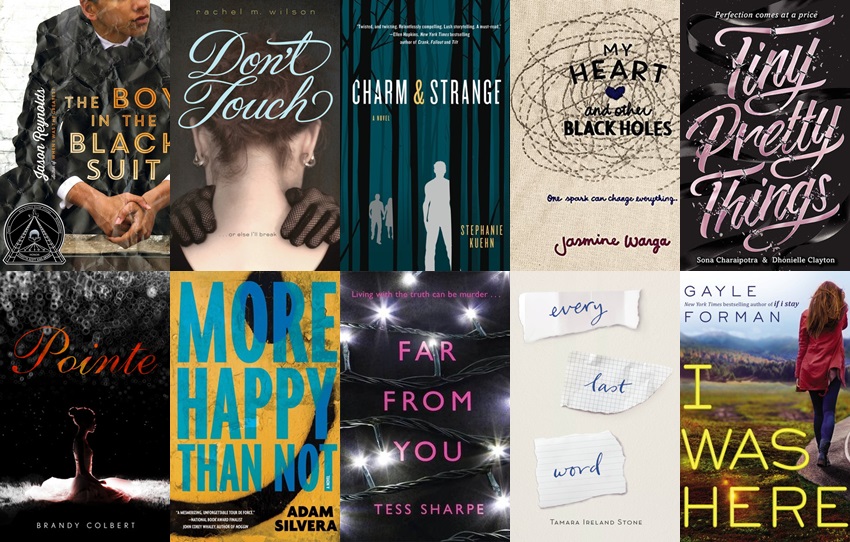 May is the National Mental Health Awareness Month. It is an advocacy that campaigns for awareness and fights stigma.

A large demographic of people turn to books to see their struggles highlighted. Young Adult has a wide foray of Mental Health selection that tackles not only suicide and depression, but the grief and the coping mechanisms that come along with it. There are books that also tells the emotional and psychological trauma of abuse, anxiety, OCD, addiction, eating disorders, and many more. This post aims to promote titles that I personally think resonates with a lot of readers that experience similar struggles. That’s how long recovering addict Sophie’s been drug-free. Four months ago her best friend, Mina, died in what everyone believes was a drug deal gone wrong – a deal they think Sophie set up. Only Sophie knows the truth. She and Mina shared a secret, but there was no drug deal. Mina was deliberately murdered.

Forced into rehab for an addiction she’d already beaten, Sophie’s finally out and on the trail of the killer—but can she track them down before they come for her? Sixteen-year-old physics nerd Aysel is obsessed with plotting her own death. With a mother who can barely look at her without wincing, classmates who whisper behind her back, and a father whose violent crime rocked her small town, Aysel is ready to turn her potential energy into nothingness.

There’s only one problem: she’s not sure she has the courage to do it alone. But once she discovers a website with a section called Suicide Partners, Aysel’s convinced she’s found her solution: a teen boy with the username FrozenRobot (aka Roman) who’s haunted by a family tragedy is looking for a partner.

Even though Aysel and Roman have nothing in common, they slowly start to fill in each other’s broken lives. But as their suicide pact becomes more concrete, Aysel begins to question whether she really wants to go through with it. Ultimately, she must choose between wanting to die or trying to convince Roman to live so they can discover the potential of their energy together. Except that Roman may not be so easy to convince. In the months after his father’s suicide, it’s been tough for 16-year-old Aaron Soto to find happiness again–but he’s still gunning for it. With the support of his girlfriend Genevieve and his overworked mom, he’s slowly remembering what that might feel like. But grief and the smile-shaped scar on his wrist prevent him from forgetting completely.

When Genevieve leaves for a couple of weeks, Aaron spends all his time hanging out with this new guy, Thomas. Aaron’s crew notices, and they’re not exactly thrilled. But Aaron can’t deny the happiness Thomas brings or how Thomas makes him feel safe from himself, despite the tensions their friendship is stirring with his girlfriend and friends. Since Aaron can’t stay away from Thomas or turn off his newfound feelings for him, he considers turning to the Leteo Institute’s revolutionary memory-alteration procedure to straighten himself out, even if it means forgetting who he truly is.

Why does happiness have to be so hard? Andrew Winston Winters is at war with himself.

He’s part Win, the lonely teenager exiled to a remote Vermont boarding school in the wake of a family tragedy. The guy who shuts all his classmates out, no matter the cost.

He’s part Drew, the angry young boy with violent impulses that control him. The boy who spent a fateful, long-ago summer with his brother and teenage cousins, only to endure a secret so monstrous it led three children to do the unthinkable.

Over the course of one night, while stuck at a party deep in the New England woods, Andrew battles both the pain of his past and the isolation of his present.

Before the sun rises, he’ll either surrender his sanity to the wild darkness inside his mind or make peace with the most elemental of truths—that choosing to live can mean so much more than not dying. Just when seventeen-year-old Matt thinks he can’t handle one more piece of terrible news, he meets a girl who’s dealt with a lot more—and who just might be able to clue him in on how to rise up when life keeps knocking him down—in this wry, gritty novel from the author of When I Was the Greatest.

Matt wears a black suit every day. No, not because his mom died—although she did, and it sucks. But he wears the suit for his gig at the local funeral home, which pays way better than the Cluck Bucket, and he needs the income since his dad can’t handle the bills (or anything, really) on his own. So while Dad’s snagging bottles of whiskey, Matt’s snagging fifteen bucks an hour. Not bad. But everything else? Not good. Then Matt meets Lovey. She’s got a crazy name, and she’s been through more crazy than he can imagine. Yet Lovey never cries. She’s tough. Really tough. Tough in the way Matt wishes he could be. Which is maybe why he’s drawn to her, and definitely why he can’t seem to shake her. Because there’s nothing more hopeful than finding a person who understands your loneliness—and who can maybe even help take it away. Step on a crack, break your mother’s back. Touch another person’s skin, and Dad’s gone for good.

Caddie can’t stop thinking that if she keeps from touching another person’s skin, her parents might get back together… which is why she wears full-length gloves to school and covers every inch of her skin.

It seems harmless at first, but Caddie’s obsession soon threatens her ambitions as an actress. She desperately wants to play Ophelia in her school’s production of Hamlet. But that would mean touching Peter, who’s auditioning for the title role—and kissing him. Part of Caddie would love nothing more than to kiss Peter—but the other part isn’t sure she’s brave enough to let herself fall. She’s eating again, dating guys who are almost appropriate, and well on her way to becoming an elite ballet dancer. But when her oldest friend, Donovan, returns home after spending four long years with his kidnapper, Theo starts reliving memories about his abduction—and his abductor.

Donovan isn’t talking about what happened, and even though Theo knows she didn’t do anything wrong, telling the truth would put everything she’s been living for at risk. But keeping quiet might be worse. If you could read my mind, you wouldn’t be smiling.

Samantha McAllister looks just like the rest of the popular girls in her junior class. But hidden beneath the straightened hair and expertly applied makeup is a secret that her friends would never understand: Sam has Purely-Obsessional OCD and is consumed by a stream of dark thoughts and worries that she can’t turn off.

Second-guessing every move, thought, and word makes daily life a struggle, and it doesn’t help that her lifelong friends will turn toxic at the first sign of a wrong outfit, wrong lunch, or wrong crush. Yet Sam knows she’d be truly crazy to leave the protection of the most popular girls in school. So when Sam meets Caroline, she has to keep her new friend with a refreshing sense of humor and no style a secret, right up there with Sam’s weekly visits to her psychiatrist.

Caroline introduces Sam to Poet’s Corner, a hidden room and a tight-knit group of misfits who have been ignored by the school at large. Sam is drawn to them immediately, especially a guitar-playing guy with a talent for verse, and starts to discover a whole new side of herself. Slowly, she begins to feel more “normal” than she ever has as part of the popular crowd . . . until she finds a new reason to question her sanity and all she holds dear. Black Swan meets Pretty Little Liars in this soapy, drama-packed novel featuring diverse characters who will do anything to be the prima at their elite ballet school.

Gigi, Bette, and June, three top students at an exclusive Manhattan ballet school, have seen their fair share of drama. Free-spirited new girl Gigi just wants to dance—but the very act might kill her. Privileged New Yorker Bette’s desire to escape the shadow of her ballet star sister brings out a dangerous edge in her. And perfectionist June needs to land a lead role this year or her controlling mother will put an end to her dancing dreams forever. When every dancer is both friend and foe, the girls will sacrifice, manipulate, and backstab to be the best of the best. I Was Here by Gayle Forman
l B&N l Book Depository l Goodreads
Cody and Meg were inseparable.
Two peas in a pod.
Until . . . they weren’t anymore.

When her best friend Meg drinks a bottle of industrial-strength cleaner alone in a motel room, Cody is understandably shocked and devastated. She and Meg shared everything—so how was there no warning? But when Cody travels to Meg’s college town to pack up the belongings left behind, she discovers that there’s a lot that Meg never told her. About her old roommates, the sort of people Cody never would have met in her dead-end small town in Washington. About Ben McAllister, the boy with a guitar and a sneer, who broke Meg’s heart. And about an encrypted computer file that Cody can’t open—until she does, and suddenly everything Cody thought she knew about her best friend’s death gets thrown into question.

Do you have any favorite book that realistically tackled Mental Health issues? Let us know in the comment section below!