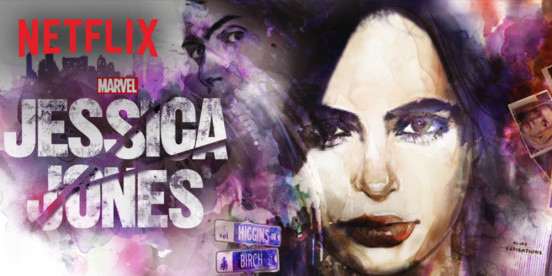 Unless you’ve been living under a rock or you’re against all things amazing, then you most likely have heard about Netflix’s new show, Marvel’s Jessica Jones.

Hollywood News Source binge watched it the weekend it released, and our gaping, TV obsessed hearts are left with the biggest Netflix hang over of 2015. Following the massive success of Marvel’s Daredevil, the streaming service hit another home run with Jessica Jones and we’re itching for a season two.

Before the episodes were released, I’ll admit I was a bit nervous when I saw the name attached to the show—Melissa Rosenberg. Not that I wasn’t a fan, but this seemed sort of left field for the screenwriter of the Twilight films and Step Up. But if you’re like me, and haven’t watched yet, put those fears to the side because Rosenberg has proved that she is as good and dynamic as a screenwriter should be. Everything about Jessica Jones hit the mark—from the writing, to the dark noir tone, and the cast, were just absolutely brilliant! For the comic book followers, a few details were changed here and there—as to be expected when writing is adapted to screen—but I feel like the storyline of Jessica Jones was done justice. No Fantastic Four flops for this gritty heroine, and Krysten Ritter (known for Don’t Trust the B—- in Apartment 23, and Veronica Mars) fiercely embodies the role of Jessica Jones. And don’t get me started on Doctor Who veteran, David Tenant. Out of all of the cast, he took the role of Kilgrave, and made us question our moral compass. This anti-hero had you flopping between hate and compassion for this sadistic villain. And a show that can get you emotionally invested with its superb character development, is a win in my book.

So the verdict? We NEED a season two of Marvel’s Jessica Jones, and we can’t wait for Marvel’s Luke Cage!

Have you seen Marvel’s Jessica Jones? If so, let us know what you think by tweeting us @HNewsSource & @TweetsByKarina

Disclaimer: This show deals with many heavy topics such as rape, assault, & PTSD. Viewer discretion is advised.