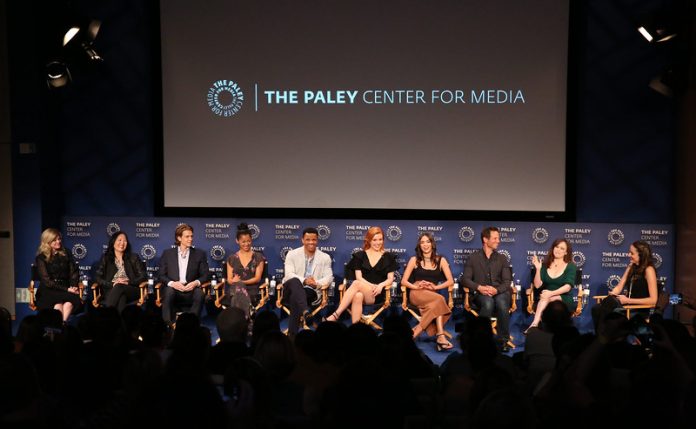 We attended the PaleyFest Fall TV Previews event for The CW’s upcoming Fall freshman show Nancy Drew. Check out all the tidbits we learned below, but beware: SPOILERS AHEAD!

1. This is a more adult version of Nancy Drew. She is 18/19 years old in the show, and with this comes more adult context. To this end, one Executive Producer revealed, “She’s definitely not a virgin.” To which Scott Wolf (who plays Nancy’s dad on the show) replied “WHAT?!” The audience erupted in laughter.

2. Several things from the books made it to the show. It’s inspired by book covers, the 1970s tv show, and more.

3. Who has read the books? Everyone but Alex Saxon raises their hands. Then he raises it in a very delayed fashion (busted!) as the crowd laughs.

4. Kennedy McMann, the actress who plays Nancy, is a HUGE Nancy Drew fan and joked that she’s spent her life preparing for the role.

5. Kennedy was happy Nancy isn’t a perfect daughter, perfect girlfriend, robot-type. She is complicated and has a past. She’s trying to figure out who she is and is experiencing who she is and who she is not, trying to fill the gaping hole she has from the grief she’s going through from the loss of her mother.

6. Sadly, there will not be a dog on the show. Because they can’t afford it. But the producers haven’t given up, and are trying to convince The CW.

8. The actress who plays the ghost on the show, Stephanie Van Dyck, is super sweet in real-life, according to Kennedy, so it’s weird for her to see her out of character as there’s such a stark contrast. Scott also chimed in how he’s been scared of her between takes, because she just looks that creepy.

9. The moderator welcomed Scott by saying, “Welcome to the hot roster of CW Dads.” I have to say, I agree.

10. This show is getting a lot of comparisons to Riverdale, something the Executive Producers and cast find flattering. Note: The show is slated to air right after Riverdale.

11. The show is hinting at a romance between Nancy and Nick, and the moderator wanted to be the first to suggest a ship name of (don’t know how to spell it) “Nick-cy” Pronounced like “Nick” then “See”. Kennedy is not convinced for the very reason I’m struggling here – how would you spell it? There would be a lot of C’s and the spelling is unclear.

12. As for the romance between Nancy and Nick, here’s what their actors had to say: Kennedy said they have an instant physical chemistry, and he shows her this safe and caring side. But he doesn’t know her history. Tunji Kasim said their relationship is complicated and will continue to be complicated.

13. There was also a tease of an Ace & Bess pairing. “He tries.” says Maddison Jaizani, which elicited a lot of sympathy from the audience.

14. One romance that’s not getting a lot of love from Nancy: her dad’s! Nancy is not happy to see him back in the dating pool.

15. Someone else with a complicated love life is George. We learn that George has an affair with a married man.

16. Speaking of George, Leah Lewis describes her as a tough character, who comes from a tougher side of town. She had beef with Nancy in high school. Had it not been for this crazy turn of events, they would never had been caught dead together. Though they are enemies, everyone seems to agree that they are actually very similar. The moderator says she thinks Nancy and George are destined to be best friends. “Will take a long time!” said an unconvinced Tunji

17. We are going to find out about Nick’s backstory. They did a lot of research on young kids who have manslaughter charges. Tunji felt that it was immensely important to get it right if they’re going down that track.

18. We see a flashback in the pilot, and it was very well-received. The Executive Producers let us know that we will be getting more flashbacks, and specifically, more flashbacks of Nancy’s mom.

19. Nancy’s dad is not happy she is back to sleuthing. Probably because this time around it is not as harmless and innocent as it used to be. “When it’s a felony…” joked Kennedy.

20. Nancy & her are struggling as father/daughter. They have been grieving in very different ways and are struggling to connect. Though they yearn for each other.

21. There will be a season long mystery with smaller mysteries throughout it.

22. As for who is the culprit of season 1’s mystery, when asked, everyone said no one on stage knows who really did it. Maybe. They said no then got cheeky. I personally remain unconvinced this is true!

23. The moderator dove further in trying to figure out who did it. She doesn’t think it’s Ace. “He’s got an alibi!” Alex Saxon says about Ace. Moderator says his character is so nice he’s at the bottom of the suspect pool. Perhaps Bess? We see that she has sticky fingers. “She steals,” says Maddison. There’s this whole other side to her. Her guess is Nick as he is the new guy in town and a mystery. The timing of his arrival is suspect to her. The cast all has their own theories. “I don’t think Nancy did it,” jokes Kennedy.

We were fortunate enough to also be on the red carpet where we interviewed several of the actors and Executive Producers of Nancy Drew. Watch all of our interviews here: https://www.hollywoodnewssource.com/exclusive-interviews-with-nancy-drew-cast-eps-at-paleyfest-fall-tv-previews/