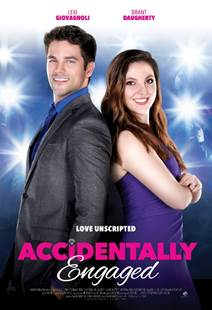 Read our review of Accidentally Engaged- on Digital HD and On-Demand June 7! When Clarissa gets a role opposite rising star Chas Hunter, she’s thrilled. However, when she’s fired, she returns back home to a bridal shower deflated. But when a photo is published that looks like Clarissa is dating Chas, she doesn’t exactly clear the air. This is a perfect opportunity for Chas to protect his real secret relationship, so he asks Clarissa to set up a pretend relationship. Agreeing to play along, the two find themselves in an accidental engagement that feels all too real.

Accidentally Engaged is one of those feel good movies that leaves you with a big smile on your face after the credits have rolled. It is a movie about love, friendship, success, and even failure. Nonetheless, this movie is one to watch for those day dreamers and hopeless romantics. Much like myself!

Clarissa is a character that is extremely relatable. She’s a young woman with a dream to succeed in the world of Hollywood. Even when she struggled to make a name for herself, she never gave up. Her dreams pushed her to keep going and not let the negativity in her life affect her. This included her love life as well. Clarissa stuck to her guns and didn’t let anything divert her from achieving her goals.

Chas: unattainable and the Hollywood golden boy that everyone would love to date. There is nothing more I love than a flawed love interest. He was successful yes, but what he needed was someone to keep him grounded and that was Clarissa. Their love story started with a lie, but their chemistry was not. They found something special in one another that they both could not deny, despite their differences. Lexi Giovagnoli and Brant Daughtery successfully made an accidental engagement look real.

Overall, this movie really hit topics that young men and women go through. It gives viewers an insight into the world of the acting industry; it shows that people are capable of change; and love isn’t something that is forced but evolves with time and feelings. (Side note: as a college student, I found this movie very inspiring. Dreams should be chased if you’re passionate enough about them and Clarissa illustrated just that. Clarissa was a freshly graduate who pursued her dreams despite the stakes.)