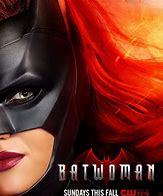 HNS participated in interviews with two cast members from the upcoming CW series, “Batwoman.” WARNING! THERE ARE SPOILERS IN THESE INTERVIEWS!

Official synopsis: Armed with a passion for social justice and a flair for speaking her mind, Kate Kane (Ruby Rose) soars onto the streets of Gotham as Batwoman, an out lesbian and highly trained street fighter primed to snuff out the failing city’s criminal resurgence. But don’t call her a hero yet. In a city desperate for a savior, Kate must overcome her own demons before embracing the call to be Gotham’s symbol of hope.

Rachel Skarsten, who plays Alice, talked about the fun and challenges of playing a character that is mentally ill.

Meagan Tandy, who plays Sophie, shared with us who Sophie is and what she has been doing to prepare for the physical demands of her role.

“Batwoman” began airing on October 6th.  Catch up and then keep up Sunday nights on the CW!