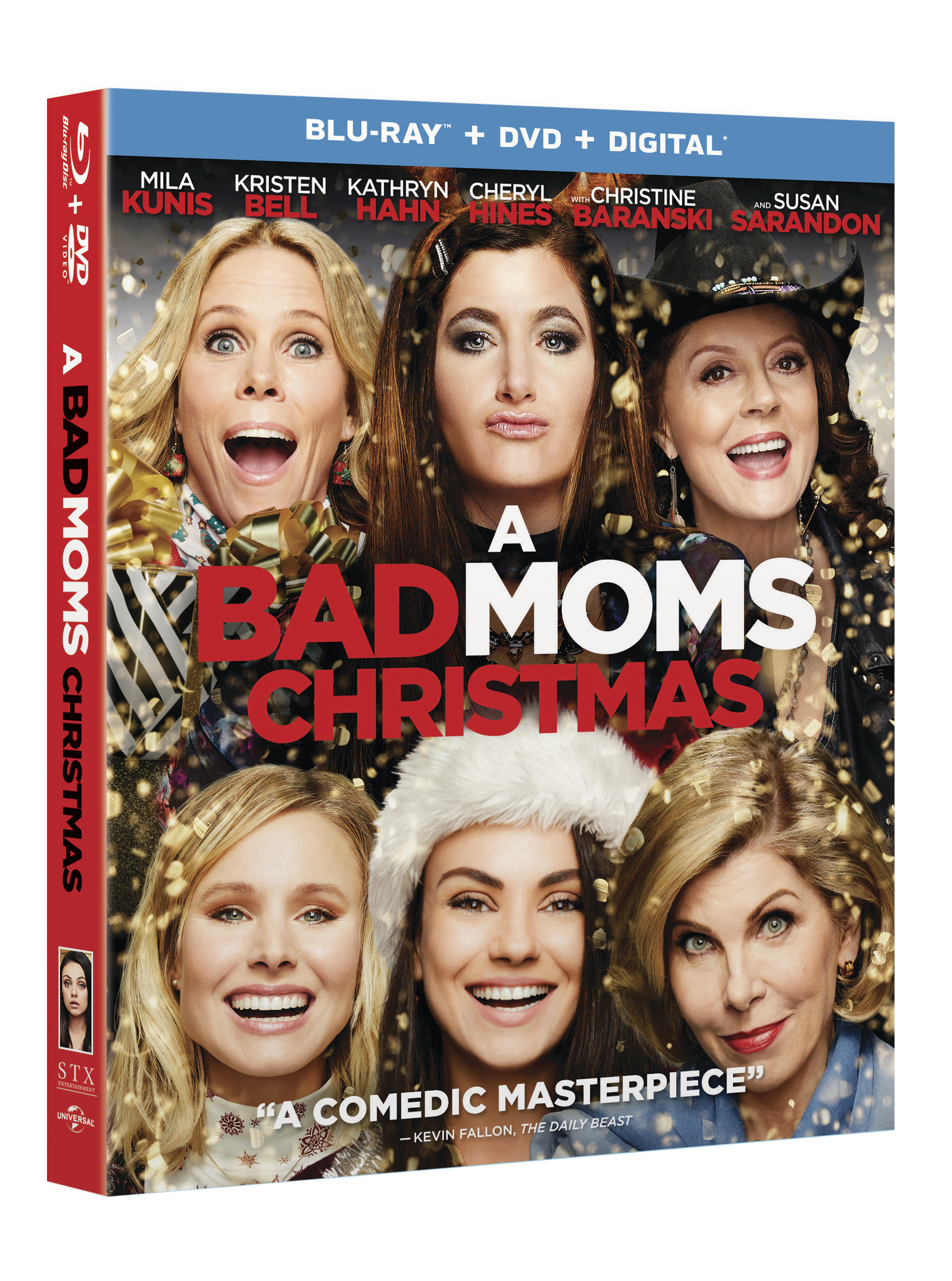 A Bad Moms Christmas is out on Blu-ray/ DVD/ VOD this week and we had the chance to review the product beforehand. Read on for all the details and grab your copy HERE. Three overwhelmed and overworked mothers are ambushed during the holidays by their own moms in the hilarious and heartfelt comedy, A Bad Moms Christmas, arriving on Digital on January 23, 2018 and on Blu-ray™, DVD and On Demand on February 6, 2018 from STXfilms and Universal Pictures Home Entertainment.

The original trio of suburban Chicago pals, Mila Kunis (Ted), Kristen Bell (Forgetting Sarah Marshall), and Kathryn Hahn (“Transparent”), are joined by newcomers Christine Baranski (“The Good Wife”), Cheryl Hines (“Curb Your Enthusiasm”), and Susan Sarandon (“Feud”) as the leading ladies’ respective mothers in this sequel to 2016’s breakout hit Bad Moms. Raunchy, witty, and fun, A Bad Moms Christmas, from STXfilms, also stars Justin Hartley (“This Is Us”) and Peter Gallagher (“Law & Order: SVU”) and offers a hysterical look into the lives of moms dealing with familial pressures and expectations during the holidays. The bonus gag reel, deleted scenes and extended music video on Blu-rayTM, DVD and Digital deliver tons of laughs from the all-star comedic cast.

Written and directed by Jon Lucas and Scott Moore (The Hangover, Four Christmases), A Bad Moms Christmas follows our three under-appreciated and over-burdened women as they rebel against the challenges and expectations of the Super Bowl for moms: Christmas. And if creating a more perfect holiday for their families wasn’t hard enough, they have to do all of that while hosting and entertaining their own mothers. By the end of the journey, our moms will redefine how to make the holidays special for all and discover a closer relationship with their mothers.

A Bad Moms Christmas will be available on Blu-ray™, DVD and Digital.

I loved the film A Bad Moms Christmas, so when offered the opportunity to review the Blu-ray/ DVD/ Digital copy, there wasn’t any hesitation from me. I was sent the three-in-one combo pack for review. These combo packs really are the best of all worlds and always a great investment in my opinion. I’m someone who likes having physical copies of films/ books/ music/ etc. but this version also has the very convenient digital code if you want a way to watch on your iPad/ tablet/ laptop/ etc. So I’m a fan of opting for this version.

Buying the Blu-ray or DVD is all about what you don’t get from streaming services or on demand – the special features. Here’s a review and break down of the four special features included in this product:

Special Feature: Gag Reel – I think every Blu-ray/ DVD should have a gag reel. They have always been my favorite. I love how viewers get to see a little glimpse of what the actual filming process is like – and in the funniest way. And this Blu-ray/DVD did not disappoint here. You can tell from this feature in particular how much fun this set must have been. There are numerous moments from the gag reel that had me laughing hard. My favorite moments were between Kathryn Hahn (who plays Carla) and Justin Hartley (who plays Ty). If you’ve seen the film, then you’ll remember a waxing scene… I have no clue how the actors got through that scene with a straight face. It was so hilarious. The gag reel has some of these outtakes, and they’re definitely worth watching.

Special Feature: Additional Scenes – This is actually less in the way of new scenes and more so additional takes/ lines on scenes in the film. A lot of the lines here were equally as hilarious as the ones that made it into the final version of the film. It was really fun to see the different variations of lines, and again Kathryn Hahn especially killed it. I liked how you could get a sense of what writers do in this special feature, as they often come up with multiple jokes/ lines and see what works best.

Special Feature: Crew Music Video – I don’t want to spoil any of the film, but the end of the film concludes with the cast dancing around ridiculously in a funny way. In this special feature, the crewmembers all get their turn. It’s a lot of slow-mo, over-the-top moves and people decked out in Christmas sweaters and Santa hats. It’s a cute feature that pays homage to the crewmembers who often don’t get as much recognition as they deserve.

Admittedly, I’m not a techie. I don’t always understand the technical lingo of things, but I know they prove super important when it comes to quality and getting the product you want. Here are the specifics on the Blu-ray and DVD versions of the product: