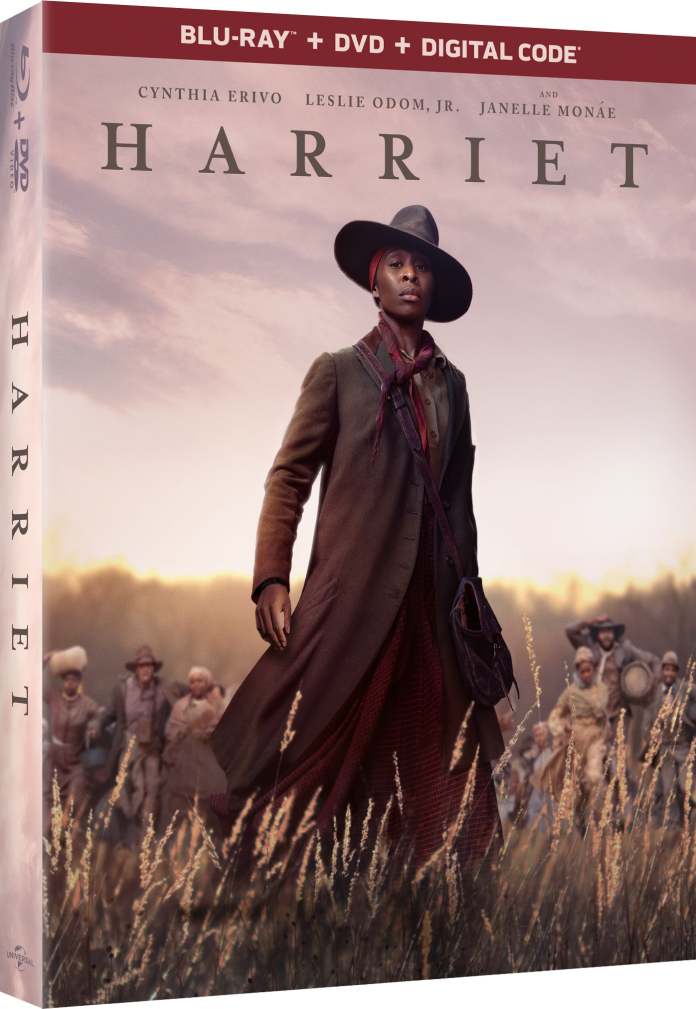 Thanks to Universal Pictures Home Entertainment and Think Jam, we received a review copy of the Blu-ray/DVD/Digital combo pack of the incredibly powerful film Harriet. Read our review of the product below! 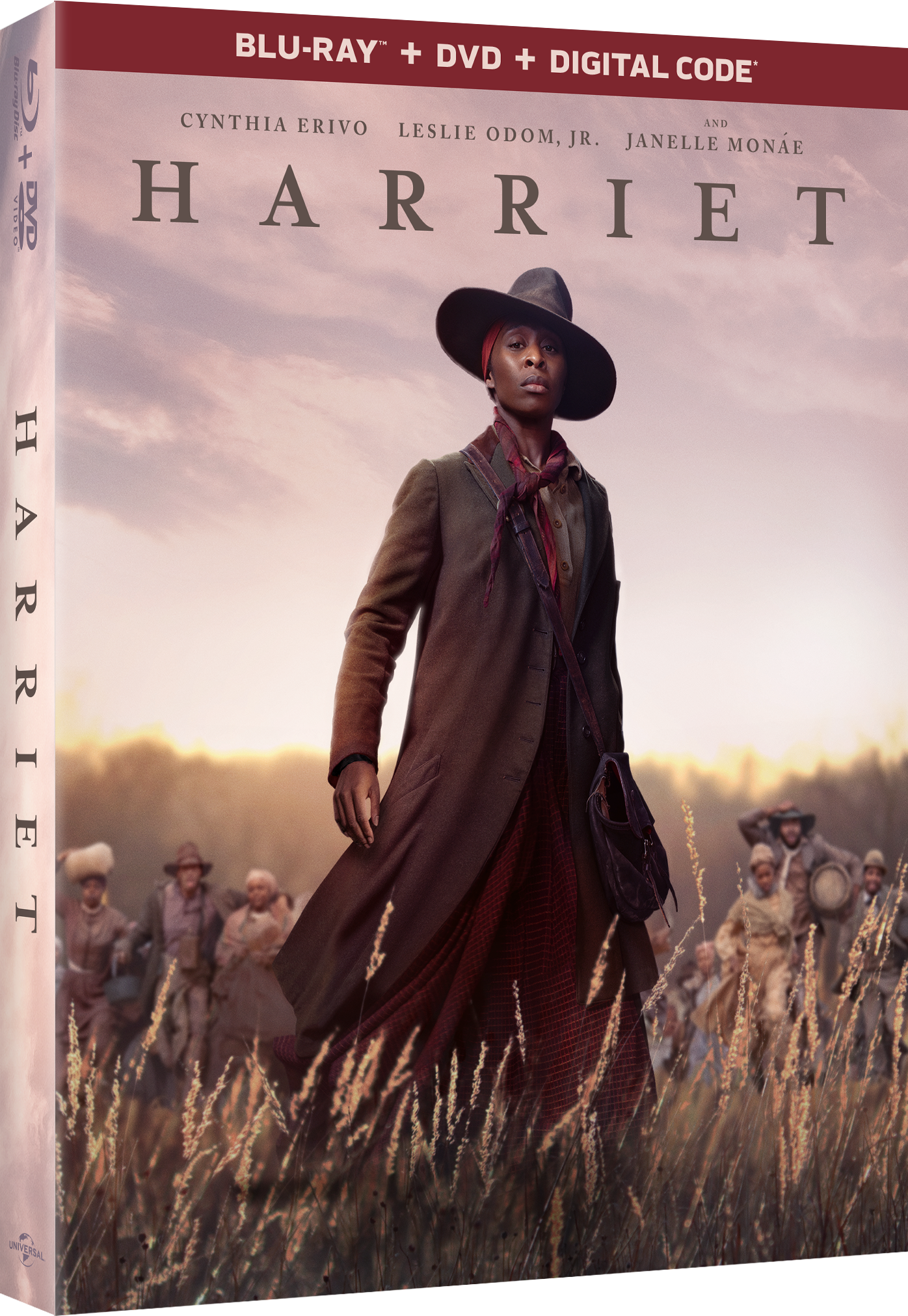 For starters, I must say if you haven’t already, you absolutely must see this film. It is an incredible look at a woman who singlehandedly helped hundreds to their freedom. She did so with unheard of courage, strength, grace, and brilliance. Her story is one that’s heard but not nearly enough. A lot know of her name, but don’t truly know her story. As this isn’t a film review, I’ll stop there, and turn my focus to the Blu-ray/DVD/Digital combo pack!

The product here is a lot in one – you get a lot of bang for your buck. This combo pack includes a Blu-ray disc, DVD disc, and a digital code. Literally three methods to watch the film, all in one product! The product itself is very sturdy and has a convenient sleeve for added protection. The poster used for the product portrays the film beautifully, and it really has a powerful effect at first glimpse.

Product synopsis: Follow the inspirational journey of one of the bravest people and heroes in history, Harriet Tubman, as she risks her life to save others from the horrors of slavery in HARRIET, arriving on Digital January 14, 2020 and Blu-ray™️, DVD and On Demand on January 28, 2020 from Universal Pictures Home Entertainment. With a 97% audience score on Rotten Tomatoes®, HARRIET on Blu-ray™️, DVD and Digital has a variety of compelling bonus features, including deleted scenes, a deeper look into Harriet Tubman’s story, and feature commentary with director and co-writer Kasi Lemmons. The captivating and emotional story of courage, HARRIET has been nominated for two 2020 Golden Globe® awards including Best Actress in a Drama for Cynthia Erivo and Best Original Song for “Stand Up” which was co-written by film star Erivo and Joshuah Campbell. Additionally, the film was nominated for a SAG Award® and a Critics Choice Award, earning a total of three Best Actress nominations.

Film synopsis: Based on the thrilling and inspirational life of an iconic American freedom fighter, HARRIET tells the extraordinary tale of Harriet Tubman’s escape from slavery and transformation into one of America’s greatest heroes. Haunted by memories of those she left behind, Harriet (Erivo) ventures back into dangerous territory on a mission to lead others to freedom. With allies like abolitionist William Still (Odom Jr.) and the entrepreneurial Marie Buchanon (Monáe), Harriet risks capture and death to guide hundreds to safety as one of the most prominent conductors of the Underground Railroad. Witness the story of a woman who defied impossible odds to change the course of her life and the fate of the nation.

The special features are always the make-it or break-it aspect of choosing whether to buy a Blu-ray or DVD for me, and in this aspect, Harriet certainly did not disappoint!

Deleted Scenes: There were both new and extended scenes in this feature, and they all are worth watching. Everything we see here takes a little more time with the characters that we love in the film, and add to the trajectory of the story. While I see why they were cut for pacing purposes, they are definitely worth a look as standalone scenes. My favorite deleted scene was of the enemies approaching the church and searching for hidden slaves. They open a secret door on the floor of the church, which thankfully didn’t reveal anything but booze (in that moment), and while watching, not knowing the outcome, I felt my heart rate rise. I thought it was a very poignant moment. Another favorite is a beautiful moment when Harriet first arrives at the new home and is welcomed with a dinner and treated like a guest for probably the first time in her life – the confusion/ shock on her face really resonated with me. Lots more here, and definitely worth the look!

Her Story feature: This feature had interviews with several of the cast and filmmakers. Their words regarding the story and Harriet were all so eloquent and insightful. I’ll do my best to paraphrase some of the moments that stood out to me. They talk about hout Harriet was a superhero woman that existed without limitations. How being an African American woman at that time was the “lowest common denominator” and how important to have a film to truly know an African American woman. Cynthia Erivo and Leslie Odom Jr. spoke about the importance of their characters. The filmmakers spoke about this beautiful moment on set where the weather was poor and they feared the wouldn’t get the shot. Suddenly it cleared up, and there was this moment where they all felt like Harriet was looking down on them. They spoke about the importance of filming in the South, and feeling the story in the location of where it happened. They talked about the powerful moment in the film shot with extras running to their freedom. The inspiration of Harriet, and seeing all sides of her was important to Cynthia Erivo. She is excited to see families share in her strength and talks about the power of it. “Black history is American history,” says Janelle Monae during her interview, and I couldn’t have summed it up better myself!

Becoming Harriet feature: Cynthia Erivo felt so strongly that she did not want to get this wrong. You can really see the sense of responsibility she had to portray this character as best as possible. Producer Debra Chase talks about seeing Cynthia on Broadway in The Color Purple and being so moved thinking, “Oh my God, this is it, she’s Harriet.” They both are the exact same height – 5’3, and both tiny yet carry themselves with confidence. Cynthia talks about having to throw everything she has into this role, and then some. Leslie Odom Jr. has known Cynthia for a long time. They’ve starred on Broadway together, and cool fact – Cynthia is his daughter’s godmother! Janelle Monae said that Cynthia called her personally and asked her to be in the film. All the singing you see from Cynthia in the film was done live. Both Cynthia and Harriet are forces of nature.

The last feature included is the feature commentary with co-writer and director Kasi Lemmons. A lot of great info in this feature, that history and film buffs alike are sure to enjoy!

HARRIET is now available on Blu-ray™, DVD and Digital.

I’m never very good at understanding all the technical aspects of DVDs or Blu-rays, but I know for some it is very important. Here are the specs for those much more technologically saavy than me:

We recently were SO lucky to be able to interview a few people from the film – watch our exclusive interviews below with ‘Harriet’ actress Cynthia Erivo and Producer Daniela Taplin Lundberg!