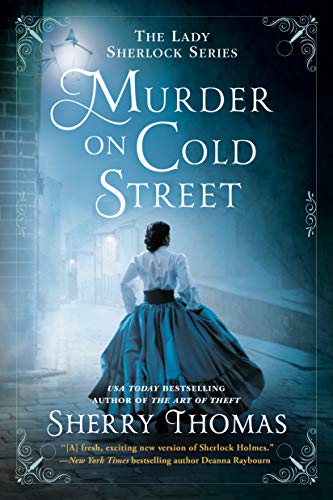 Inspector Treadles, Charlotte Holmes’s friend and collaborator, has been found locked in a room with two dead men, both of whom worked with his wife at the great manufacturing enterprise she has recently inherited.

Rumors fly. Had Inspector Treadles killed the men because they had opposed his wife’s initiatives at every turn? Had he killed in a fit of jealous rage, because he suspected Mrs. Treadles of harboring deeper feelings for one of the men? To make matters worse, he refuses to speak on his own behalf, despite the overwhelming evidence against him.

Charlotte finds herself in a case strewn with lies and secrets. But which lies are to cover up small sins, and which secrets would flay open a past better left forgotten? Not to mention, how can she concentrate on these murders, when Lord Ingram, her oldest friend and sometime lover, at last dangles before her the one thing she has always wanted?

Murder on Cold Street is a delightful addition to Lady Sherlock series. If you are a fan of historical mystery, it is time to pick up the first installment of this series. Readers will be rewarded with a perceptive kick-ass heroine accompanied by a lovely cast, and the most agonizing slow-burn romance.

Inspector Treadles has been accuse of a murder. The book will explore his relationship with his wife Alice as Charlotte Holmes and co. unravel the truth behind these gruesome murders.

I am one of the minority that did not really care for the “The Art of Theft.”  The previous book personally did not deliver any romance endorphins. I was also not keen on the heist plot either. However, rest assured, Murder on Cold Street delivered what I was looking for. This is certainly an upgrade.

Murder on Cold Street is likethat filler episode in an Anime that was not in the Manga. It was good but not in the same caliber as the first three books, which has been my standard of goodness. However, do not be deterred because while I was not satisfied with the plot, I love everything about the romance development.

Lord Ingram has finally decided he is ready to bare it all for Charlotte Holmes. Whatever The Art of Theft lacks, Murder on Cold Street delivers. Charlotte is not afraid to gratify her own physical pleasure but is she ready to accept what her senses has been telling her? Bonus content: flashback memories of teenage Charlotte and Ash. I cannot articulate how this book made me feel giddy so let me leave you one of my favorite quotes:

The first time Charlotte Holmes had kissed Lord Ingram, she’d been thirteen and he fifteen—and she’d blackmailed him into it by threatening to lure a horde of unruly children to the ruins of a Roman villa that he had been in the middle of excavating.

She remembered very little of the kiss itself. For a girl who possessed near-perfect recall, that had been a grand anomaly, as if for the duration of the kiss, her brain had suffered some sort of catastrophic mechanical failure.

Overall, the strongest point of Lady Sherlock series is the romance followed by the engaging and well-developed cast. The detective-fiction part comes third. If you have your own priorities in order, you would like to add these books in your TBR. As always, Kate Reading, the narrator of the audiobook, is a marvelous storyteller.