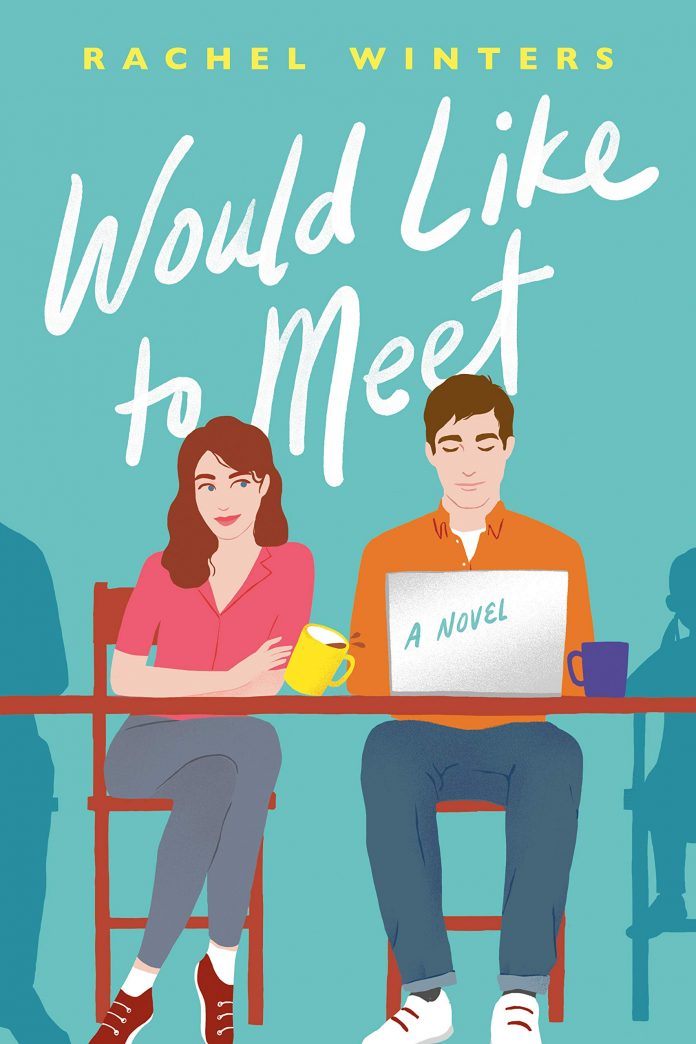 Lately, I have been notorious for starting a book and then never finishing it. However, though it’s been quite some time, I have finally finished a book from cover to cover. That book is “Would Like To Meet” by Rachel Winters, and I LOVED it. Now I need to look up any other books Rachel Winters has written.

Let’s break down the book by main characters, side characters and the overall enjoyability of the book.

Let’s start with Evie, the MC of the book. Evie is amazing, but she is flawed, which makes her super relatable. Sometimes you read books where the main character is almost too perfect, and it’s like, nobody is that amazing. Unless, of course, you are Taylor Swift. Evie is quirky and hard working and overall a really great character, even if she did mess up her friend’s wedding big time.

I really loved that Evie didn’t immediately fall for Ezra’s charms — she really was not star-struck by him at all. Because let’s face it, he sucks.

The way she was around Ben and Annette is really sweet, too. I can’t believe I didn’t see where the author was going with this story when those two were introduced and became important people in Evie’s life. Duh, Madeline.

Side note: can we talk about the fact that she demanded the credit for the script that she actually wrote that Ezra and Monty were taking credit for? AMAZING. I am so glad she got to live out her dreams! She deserves it after all the hard work she did for Monty.

Friends and the possible boyfriends

I know Ezra and Ben were more main characters, but I feel like Evie deserves her own section. At first, I figured that Evie would end up with Ezra — the rich, bad boy that would surely steal her heart when we uncover that he is actually not just a celebrity with a big ego. However, I was wrong because Ezra is a huge jerk with a huge ego to boot. Seriously, the guy just sucks so much. He is self-absorbed and pretentious. Definitely not someone you’d want to waste your time on. And that’s the tea on him. Boo, Ezra! 2 thumbs down.

Let’s talk about Ben now, otherwise known as “dull dad” by Ezra. See? HUGE JERK. I like Ben because he isn’t the obvious love interest at first. He kind of sneaks up on you, and you couldn’t help but root for him. He was a single dad, his wife died in a tragic accident, and I wanted to see him find happiness. It is great to see the nice guy get the girl!

Now onto Maria, Sarah and Jeremy, Evie’s friends. They are a hoot! Maria and Jeremy are amazing friends that everyone needs in their lives. Jeremy is hilarious and there were times where I snickered out loud while reading some of his dialogue/reactions. Sarah really got on my nerves, though. She is WAY too needy, and if she were my friend, I would have found a way to get out of all those wedding festivities.

Also, let’s shout out Jane because oh, Jane. Lol. You’d just need to read it to experience the full effect of Jane.

Being a romance book fan, I was thrilled at Evie’s meet-cutes that she was doing to help Ezra write his script. Everyone dreams of their perfect meet-cute, but unfortunately, Evie’s meet-cutes were disasters. They were fun to read about and probably my favorite aspect of the book. It kind of felt like a Hallmark movie. Hey, Hallmark, I think I found your next movie. Maybe in the summer line-up?

I also like that the story isn’t all centered around romance but about friendship as well. Even though there are times when Evie would choose work over friends, I think she really developed throughout the course of the book. She was trying her best to be a friend, an employee and Ezra’s inspiration for writing. In fact, I think I favored the friendship aspect over the romance aspect of the book. Sure, the romance aspect was great, but friendships are pretty darn important.

Let’s get into the romance aspect of the book. It is definitely a fun and light romance. As I said before, I didn’t know where the author was going to go with Evie’s love life. When I first started reading, I thought for sure she would end up with Ezra. I was pleasantly surprised when she ended up with Ben at the end of the book. A great choice by the author, I must say.

All in all, this was a cute book to read for a rainy day or just a fall day. I definitely recommend it for all those romance-lovers out there. Who knows, maybe you’ll get your own meet-cute soon.

Did you read the book? If so, let us know what you thought about it!