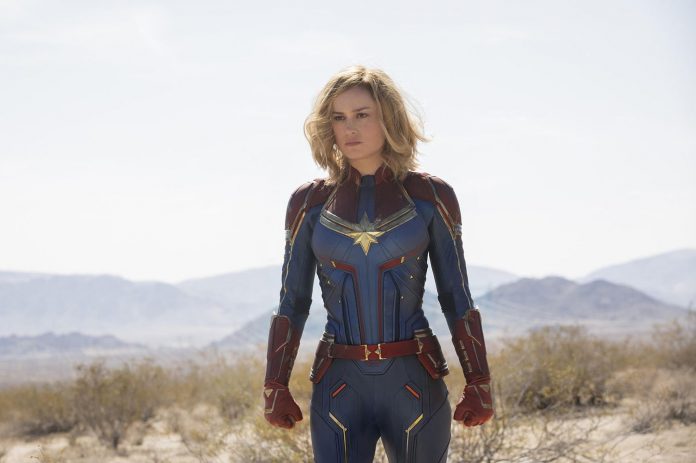 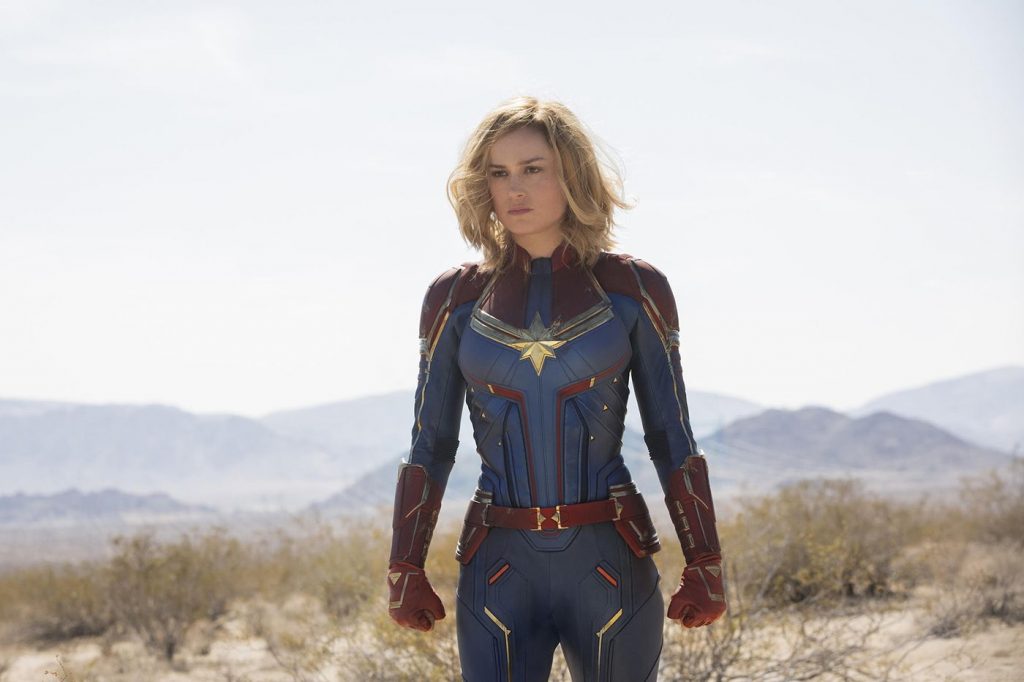 Marvel has truly given us a gift for International Women’s Day this year – the studio’s first female-led superhero film, and a damn good one. That’s right, Captain Marvel flies into theaters today – higher, further, faster than the boys.

Not that Carol Danvers (Brie Larson) needs their approval or that comparison. Captain Marvel is her story – following Danvers (first known only as Vers) as she becomes one of the universe’s most powerful heroes when Earth is caught in the middle of a galactic war between two alien races. There are several other major players, including Vers’ Kree squad – notably featuring Jude Law as her superior Yon-Rogg, as well as Gemma Chan and Djimon Hounsou – and their shapeshifting mortal enemies, the Skrulls – led by Ben Mendelsohn’s Talos. You’ll also see some very familiar faces in Samuel L. Jackson’s Nick Fury (before his eyepatch!) and a green Agent Coulson (Clark Gregg), not to mention Lee Pace as Ronan. (Sadly, no dance-offs this time.)

I was inclined to say that the movie starts off slow, despite jumping right into the action – but then this tweet changed my mind.

Someone warned me that CAPTAIN MARVEL starts slow but I saw it today and the first two minutes feature Annette Bening with a gun and Jude Law in an undone space bathrobe. Clearly I was lied to!

I mean, that alone makes the entire film, right? And it’s only uphill from there. Going in with only minimal knowledge of Carol Danvers’ backstory, I was fascinated to see her journey from Vers to Carol Danvers to Captain Marvel. The twists and turns that path takes are so fresh for the MCU and so resonant to issues women face today – particularly a stunning and surprising sequence delving into Carol’s memories. That was a standout scene that I’m still thinking about days later and can’t wait to experience again.

Strength is also a major theme of the film – whether the strength to overcome your emotions, or the resilience to keep fighting against impossible odds. These are again very relevant for women today and could easily feel overdone or heavy-handed in the film – but they don’t. Similarly to Black Panther, watching Captain Marvel you get the feeling that you are seeing something special and important – something that will be an inspiration and a touchstone for generations.

As beautiful and important as these moments and themes are, Captain Marvel is also a really good time. The buddy cop dynamic between Carol Danvers and Nick Fury (oh sorry, just Fury) is fantastic. It’s amazing to see such a different, early version of Fury – not to mention the formation of the relationship that will lead him to call Captain Marvel via pager at the end of Infinity War. Carol’s friendship with fellow pilot Maria Rambeau (Lashana Lynch) plays heavily into the plot, but suffice to say that it is also so satisfying and beautiful. (Have I said beautiful enough? It really sums it all up.)

Can we also talk about Goose? This “cat” is an absolute scene-stealer, forming an unlikely bond with Fury and proving to be a vital part of the team.

I loved Captain Marvel – from the 90s aesthetic (Blockbuster! Come back to us!) and Goose to the surprising plot twists – and most of all, for Brie Larson showing us just how good it feels to have a female-led superhero film on the big screen. I hope it leads to many more, but also to a lot more Carol Danvers – because she has proven herself to be one of the MCU’s best. (And – spoiler alert – if the end credit scenes are anything to go by, a major player in Avengers: Endgame.)

Run (or fly if you can) and see this movie ASAP.

Captain Marvel is in theaters now.