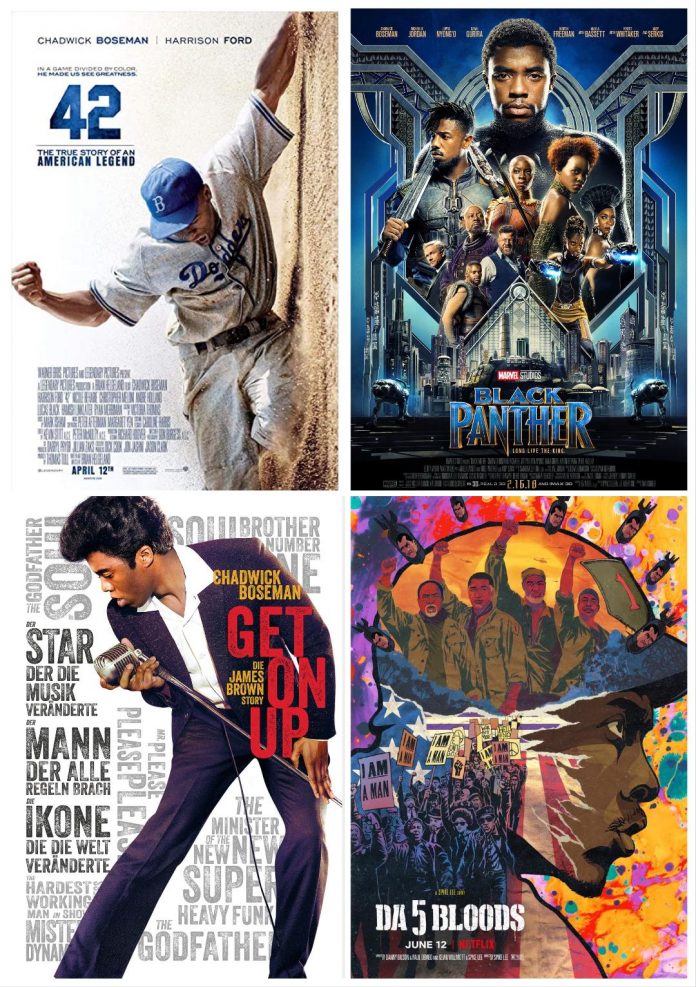 In his career, Chadwick Boseman was able to create iconic performances that showed off his versatility, work ethic, grace and all facets of his talents, that will have a lasting impression on the film industry and pop culture for generations to come. It has been a year since the tragic passing of Chadwick Boseman at the young age of 43 following a battle with colon cancer. We can all reflect and appreciate the legacy the former Howard University graduate and South Carolina native left on the stage and big screen and off it. These are my picks of his best and most influential performances that not only touched me but audiences around the the world. The irony is that in the process of him playing these iconic and legendary figures, he would become one himself, showcasing black excellence on and off the screen and inspiring millions around the world.

From Warner Bros Studio comes ’42’ (2013), the story of legendary baseball player and sportsman Jackie Robinson, played by Chadwick Boseman, in a star making performance of how he became the first black baseball player to play in the MLB (Major League Baseball) for the then Brooklyn Dodgers. In the face of racism, prejudice, and disgraceful bigotry just after World World 2, he trail-blazed the path for others to follow and beyond. He had to face a baptism of fire from the the league, fans and opponents alike during Jim Crow era America. He was supported by his wife Rachel Robinson (Nicole Beharie), his chronicler and black sports writer Wendell Smith (Andre Holland) and Branch Rickey, the Brooklyn Dodgers executive whom drafted Robinson – played brilliantly by Harrison Ford – in a bid to integrate baseball and who faced backlash himself for the decision. He broke barriers under unbelievable pressure during segregation. He would go on to win a World Series for the Dodgers. Chadwick showcased his athletic ability and subtle intensity to portray the spirit of Jackie Robinson. Every April in the MLB every team wears the number 42 to honour Jackie Robinson’s legendary contribution to the sport. 42 is the only number in baseball that has been retired, which no player has worn again.

The story about the man known as the ‘Godfather of Soul’ was brought to the big screen. ‘Get On Up’ (2014) is a film chronicling James Brown’s (Chadwick Boseman) rise from poverty to become one of the most innovative, iconic and most important musicians in history. Chadwick had to learn to dance, sing and channel James Brown through different periods in his career, displaying his full repertoire of skills for all to see. The film was produced by legendary Rolling Stones frontman Mick Jagger whom had performed with Brown in the 1960’s and knew Brown personally during the height of his powers. ‘Get On Up’ was directed by Tate Taylor (The Help), featuring a heavyweight cast including Viola Davis, Octavia Spencer, Dan Aykroyd, Lennie James, Craig Robinson, the late Nelsan Ellis and many more. How this didn’t get more recognition I’ll never understand, but I definitely recommend you watch as it’s one of Chadwick Boseman’s best performances.

Black Panther was created by Stan Lee and Jack Kirby of Marvel comics in July 1966, during the Civil rights period of high racial tension in the United States of America. He was the first black African superhero created for mainstream comics, before a host of other characters of African American descent would follow him, proving to be a game changer in that industry. We fast forward over 50 years to February 2018 in a new century, and we have Black Panther, shown and premiered around the world. Starring Chadwick Boseman as T’Challa, the young king of fictional African nation Wakanda, which unknown to the rest of the world is the most technologically advanced country in the world, thanks to vibranium the most powerful mineral on earth. He wears the mantle of the Black Panther, the alter ego he uses to protect his nation, with the super armoured vibranium suit which amplifies the superhuman strength, speed, senses and agility he has, which is achieved through eating the heart shaped herb in a ritual bestowed to the King of Wakanda. The story begins with T’Challa returning home after the death of his father, and having to face the new political atmosphere and unrest in Wakanda. This is brought on by a new nemesis that would prove to be more formidable than he could ever imagine in the shape of Erik Killmonger (Michael B. Jordan) who is aided by the villainess fugitive Ulysses Klaue (Andy Serkis) and throws questions at Wakanda’s role in the world, igniting discussions that force individuals to think long and hard. They are both backed by a wonderfully talented cast playing strong characters including W’kabi-Leader of the border tribe (Daniel Kaluuya), Wankanda’s undercover agent Nakia (Lupita Nyongo), Okoye the General of the Dora Milaje (Danai Gurira), and introducing a newcomer – the scientific genius of Wakanda and T’Challa’s young sister Shuri played by Letisha Wright. This is all helmed by the young rising director Ryan Coogler (Creed, Fruitvale Station) in only his 3rd feature film and most expensive film budget-wise at the time in 2018, estimated at 200 million. He captures all the great influences and imagery of the great continent of Africa on film, including the music featuring great tracks from Kendrick Lamar and Run the Jewels. Black Panther features a predominately black cast with various African descent, which captures the diverse spirit of Cinema, making it a game changer in the movie industry just as Wonder Woman had done in 2017, and just as Black Panther had in the comics over 50 years ago. Black Panther grossed over 1.3 billion in sales at the box office worldwide as the Number 1 movie in the world, making it the highest grossing film directed by a black filmmaker.

From legendary filmmaker Spike Lee and starring Chadwick Boseman in one of his last few on screen performances, ‘Da 5 Bloods’ (2020) tells the story of four African-American retired soldiers who return to Vietnam to find the remains of their fallen squad leader and friend ‘Stormin’ Norman and the gold he helped them to hide decades ago. ‘Da 5 Bloods’ also features a wonderful cast including Delroy Lindo in a career best performance I have ever seen him in, Clark Peters, Isiah Whitlock Jr, Norm Lewis, Melanie Thierry, Paul Walter Hauser, Johnny Nguyen and Johnathan Majors. Chadwick put in a far more subtle and nuance performance in this film, showcasing his silent charisma and grace. The cast brought a visceral intensity with black American veterans dealing with the brutality of the past wars and the physical and mental scars those left, as well as their attempts to find closure and peace by going back to Vietnam.

42 and Get On Up are available to stream on Amazon Prime Video.

Black Panther is available to stream on Disney Plus.

Da 5 Bloods is available to stream on Netflix.