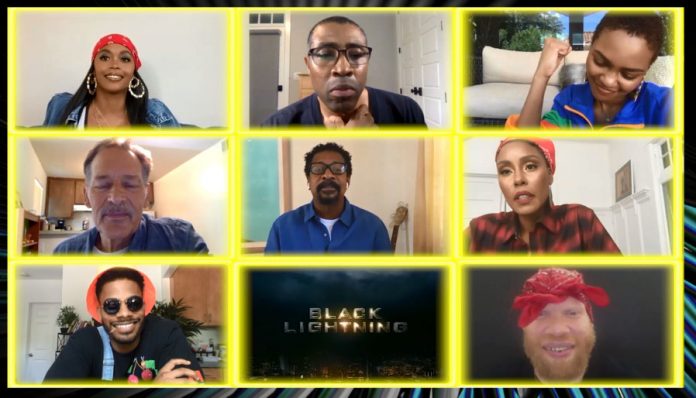 In part of DC FanDome we got to hear from the cast of Black Lightning.

Robert Townsend hosted the panel, he is a producer/director who was directed two episodes of Black Lightning he is perhaps most well known as the director and star of the 1993 superhero film The Meteor Man.

The panel opened with introductions and we were treated to some of the cast wearing their 90s best in keeping with the theme of panel. Host Townsend then started a 90s quiz with questions around Halle Berry, Will Smith and popular films of the decade to name just a few.

Once the contest had been won Townsend spoke to the cast about how much Black Lightning means to people that it is a show that tackles real issues. The cast were asked to talk about their real life inspirations from the world of comics or real life. James Remar shared a particularly beautiful story about someone who inspired him while Jordan Calloway spoke about how his parents supported his work in the industry. Christine Adams spoke about Diane Carroll and her own mother as her inspirations.

The cast spoke often about black filmmakers and actors who went before inspiring them to do what they do today. The panel also talked about their reaction to the Black Lives Matter protests and speculated on the effect that the lockdown had on the mobilisation of that movement. The next question asked was why people love the show so much, Marvin Jones III speculated that the show “speaks truth to power” China Anne McClain talked about the show being an education to people.

The cast were then asked where they wanted their characters to go next season. At the end of the panel the casts were given questions from the fans including a question about the departure of Detective Henderson (Damon Gupton) which Cress said he was unhappy about.