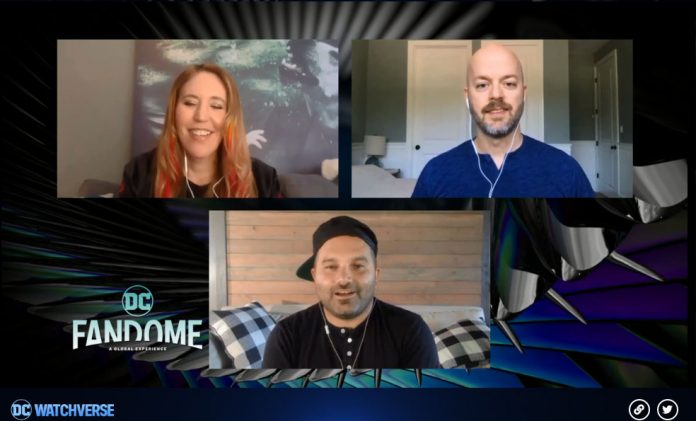 In part two of the online DC Fandome event fans got the chance to learn a little more about Lucifer Season Five Part with the show’s showrunner team.

The panel was hosted by Lucifer director Sherwin Shilati who began the festivities with a clip from the upcoming musical episode.

The scene must be viewed to be believed there are no words to properly show how wild and yet somehow appropriate the musical number is but I will leave it you to either watch the panel yourself or wait for the episode to air.

After the panel Shilati introduced the showrunners Ildy Modrovich and Joe Henderson who both talked about how much they themselves had been looking forward to the musical episode.  He went on to congratulate the pair for season 6 with Henderson noting they might be the most cancelled and renewed show on TV. They talked about being given the chance to come back for that sixth season when they thought that they were finished telling the story at the end of season five.

Shilati posed the question of which cast members were the most enthusiastic about doing the musical episode. The showrunners talked about giving the cast a choice about how much they were involved in terms of singing and dancing but that all the cast wanted to take part. Modrovich went on to talk about Tom Ellis having a special suit made for dancing.

Then Joe Henderson turned the interview around by posing a question to Shilati asking him what was the most difficult scene to suit in the musical episode. Shilati then spoke about the episode’s finale. The only thing given away about that scene is that it involves a duet. Going back to the episode itself there was a conversation as Henderson who was less involved in the episode quizzed Modrovich and Shilati about what went on behind the scenes and they revealed that there was some improv in the musical number that was previewed at the beginning of panel.

The panel with some outtakes from the show including our star Tom being ruthlessly targeted by an insect during a scene.