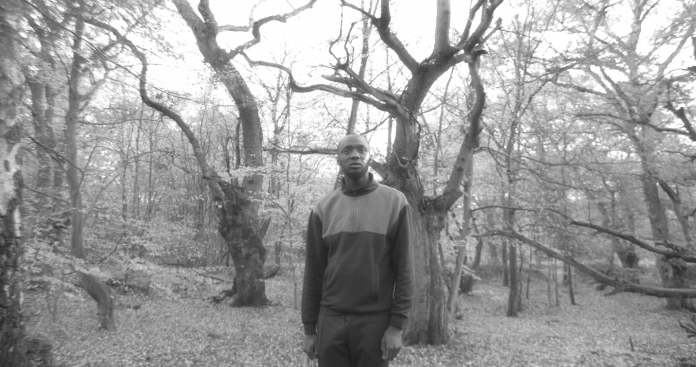 From Director George Louis Bartlett and his writing partner Theo Macdonald, comes this film noir influenced black and white film that takes you inside the mind and the world of Ralph Tennyson (Ryan Walker-Edwards), and the various characters he encounters. This journey begins when Ralph is unsuccessful in his request for a loan/overdraft with the Bank Manager played by veteran British actress Jemma Redgrave, and it is the beginning of a domino effect that causes all manor of bizarre and surreal incidents.

As a result, he flees London as he is being pursued by the very persistent and unapologetic bailiff/enforcement officer Mr. Kinny (David Schaal). He finds himself at the unglamorous Forest Lodge Hotel where he encounters the slightly nosey manager of the establishment ‘Cliff,’ played by British Editor/writer Harry Baker, as well as the hotel maid Carla (Imola Gaspar). Ralph calls on the help of his childhood friend Kent (Jacob Hawley) to try and help him out of trouble. The more we explore Ralph’s predicament, the more we discover that a traumatic event that took place in his childhood, which is done through a creative use of flashbacks using clips of him and his family on Video Cassette Player in colour to contrast with with the events in present day. The cinematography is very sharp, and the change of colour is used well, such as when everything becomes red it is a sign of possible danger. The confrontation Ralph has with David (Gary Beadle) is one in particular that stands out. The eccentric hotel neighbour Lena (Rachel Jackson) and her partner bring some humour to the intense, surreal and mercurial story-telling. The music is very important, as it has a very 70’s/ 80’s vibe reminiscent of early Walter Hill and John Carpenter, who both started as rising directors in independent filmmaking. This contributes to the nightmare journey Ralph goes on, which will at times possibly have the audience question what is real and what is Ralph’s imagination and paranoia which has him facing his inner demons.

DEMON is available to watch at the CineQuest Film Festival until March 30th 2021.