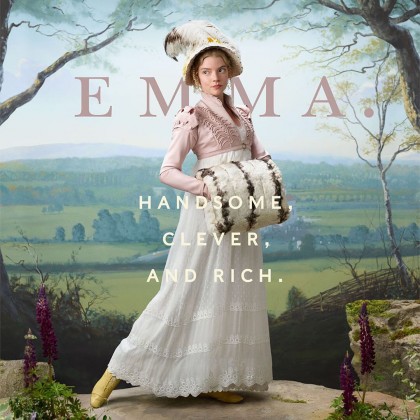 Emma. is Jane Austen’s beloved comedy brought to life. Emma Woodhouse is a wealthy young woman who keeps herself entertained by playing matchmaker to everyone within her small social sphere. And since her instincts aren’t nearly as good as she thinks they are, she finds herself at the center of more than one romantic misunderstanding. (For fans of the ’90s cult classic Clueless – that film also draws inspiration from Austen’s novel.)

This film is American photographer Autumn de Wilde’s directorial debut. Her style shines through as each scene in the film seems more vibrant and colorful than the last. The sets and costumes are nothing short of stunning. The soundtrack brings its own set of delights – with folk songs propelling the story forward in an unexpected but pleasing way. For Austen fans, this is a departure from the typical adaptations of the 200-year-old stories, but it comes as a welcome surprise.

Anya Taylor-Joy stars as the title character, who manages to be both the protagonist and one of the story’s least likable individuals. This film is just as much about finding a faithful friend as it is about stumbling upon a handsome husband. Taylor-Joy and Johnny Flynn (as George Knightley) have undeniable chemistry, while Taylor-Joy and Mia Goth (as Harriet Smith) beautifully navigate the joys and heartbreaks of friendship. Alongside this trio, Bill Nighy is nothing short of brilliant as the eccentric Mr. Woodhouse.

Hollywood News Source got a sneak peek at the film’s bonus features, which include:

Emma. is now available through streaming and on DVD/Blu-ray.