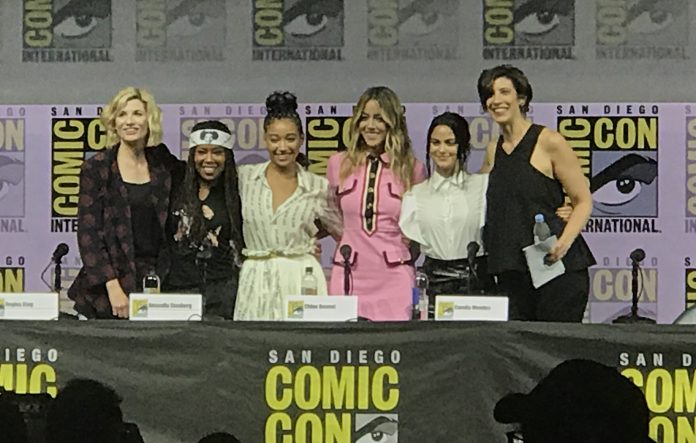 Who run the world? Girls!

Thanks to the gracious Entertainment Weekly, we were able to secure a spot at Comic-Con’s infamous Hall H during the Women Who Kick Ass panel – a panel that was in high demand and featured a lineup of female powerhouses.

Entertainment Weekly has been doing the Women Who Kick Ass panel for years, highlighting women in the entertainment industry who are paving the way for future generations. On the panel this year was Camila Mendes (Riverdale), Amandla Stenberg (The Hate U Give), Jodie Whittaker (Doctor Who), Chloe Bennet (Agents of S.H.I.E.L.D.), and Regina King (Watchmen). The women came together to talk about gender equality, their inspirations and what they’re doing to bring change to Hollywood.

When it comes to their own personal inspirations that have influenced them, the responses varied. King spoke about Linda Carter’s Wonder Woman influencing her greatly. She has vivid memories of that time in her life. Stenberg mentioned multiple inspirations, including Raven Simone. Mendes joked that hers wasn’t as impressive, but she really identified with Summer Roberts, played by Rachel Bilson, from The OC.

Being a celebrity in the spotlight, actors are constantly scrutinized or subjected to a lot of judgment when they speak out. This is something every actor has struggled with, and the women on the panel here were no exception. Mendes spoke about how she was previously afraid to speak out in this industry, but she realized that your following and your social media presence make you powerful, and she feels it is a responsibility to use that. And that it’s important to use this for good. Bennet also struggles with this sometimes but stressed the importance of walking in your truth.

Bennet recently showcased this with her Instagram post addressing her name. Cultural appropriation in Hollywood is something that has improved in our time, but is still far from being perfect. Several of the panelists had experiences in Hollywood where they were discriminated against due to their ethnicity. Recently, Bennet posted on Instagram a very personal post in which she reveals she feels conflicted about a decision she made when she was first starting out in the industry. Bennet’s real last name is Wang, but she battled not getting cast because of this, and made the decision years ago to go by Chloe Bennet – her father’s name is Bennet – changing her name to sound less Asian. She detailed how she would go out for Asian roles and was told she didn’t look Asian enough. Then she would go out for other roles and was told she wasn’t white enough. So she changed her last name and booked her first role after the name change. She still has feelings of guilt about it and felt like she needed to speak out.

Mendes could relate to this, and had similar struggles. She is Brazilian/ Latina, but most roles coming her way were very stereotyped – the girl with no money, works the difficult jobs, etc. Then Riverdale came. She’s very grateful that Riverdale portrays Veronica (her character on the show) and Veronica’s whole family as a rich, powerful family. The comics portrayed Veronica as a white, dark haired pin-up type, but the creators of the show changed this. Another change Riverdale made from the comics is that in the comics, the show depicts these two young women – Betty and Veronica – as fighting for the attention of the male protagonist Archie. Mendes talks about how their show isn’t like this – thankfully. Fighting over a man like this is useless. Instead, most of the time (this is a CW drama after all) Betty and Veronica are a duo. There’s another powerful moment on the show where the women characters all come together and beat up a rapist after he attempts to sexually assault one of the characters on the show. This was an iconic moment that Mendes thinks of fondly.

Another powerful woman on Riverdale, Madchen Amick, gave Mendes advice as she has gone through everything that Mendes and the rest of the younger castmates are going through. Amick told Mendes and costar Lili Reinhart that people are going to want to pit them against each other, and want them to be fighting and competing. She told them they need to never let that get in the way of the great friendship they have. Women are taught to compare themselves to other women. And that’s so detrimental.

Bennet definitely relates to this and speaks about how on her show – Marvel’s Agents of S.H.I.E.L.D. – 95% of the saving on that show is done by women. The moderator tried to get some info on King’s character on Watchmen, but sadly she remained tight-lipped. She’s not allowed to tell us anything.

Female filmmakers were also a focus on this panel. A resounding “yes” from all five panelists was the answer when asked if it’s different having a female director versus a male director. King spoke about the sensitivity that women bring – in a good way. Mendes has always only seen vulnerability as a strength, though it is often seen as a weakness. King concurs and said it’s exactly what being an actor is, being vulnerable. Mendes echoed this with saying it’s important because it means you’re open to the truth.

I think a common misconception that some people have when it comes to powerful women or feminism is that they automatically view these women as being anti-men. This simply isn’t true, and this was addressed at the panel. Bennet stressed the importance of men to be allies with women. Stenberg spoke about how we can’t be closed off to having the difficult conversations. These conversations bring change and growth.

The panel concluded with a fun question of who everyone would cosplay as at Comic-Con. Whittaker said she wants to be ET. Or have someone drive the bike and she’ll hang in the basket (to recreate that unforgettable scene from the movie). Stenberg wants to cosplay Clementine from Telltale. King would be Firestar From Spider-Man. Bennet said Hermione from Harry Potter. Because being in a robe is comfortable. Mendes said a cute, sexy Toad from Super Mario.

No matter where each of the five women on the panel end up, I know that Hollywood – and the world – are going to be better because they’re in it.