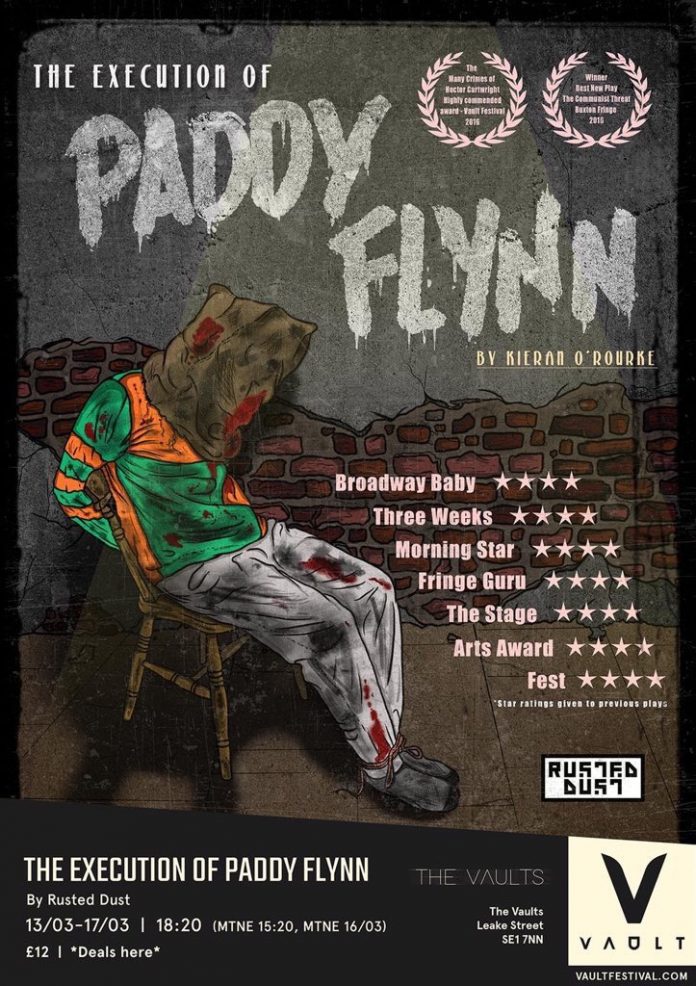 Domingos Coxi sat down with the team behind play The Execution of Paddy Flynn for an extended interview. 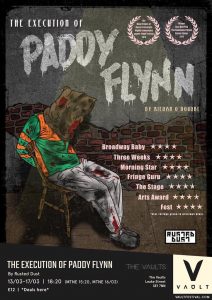 The Execution of Paddy Flynn play is based on and inspired by infamous Sheffield gangster – George Mooney, and is set during the 1920’s around the Doncaster Cup the biggest horse race in Yorkshire regarding race fixing, gangsters and jockey’s , along with the mayhem, and dark comedy that brings a twist.

Domingos –How did you all get involved in the project?

Kieran- I started writing it 1st; it was through my theatre company Rusted Dust, I know Leonora from years ago in Sheffield, I was looking for a producer so I asked her to get onboard with it, and I know Sam when I was still acting we had the same agent for a time, we also had the same part-time job for a while, and Sam got me involved in a lot of new writings acts when I was just starting out as a writer. And Sam directed a lot of stuff for me, like short 30 minute plays but this is the 1st time we have worked on a proper one, like on what you would say is a full length play.

Leonora- I have forgotten to mention that we all worked on a steam train together, separate, but it was kind of a performance? You could call it acting with the same part time jobs, Kieran lived with me so that was enough to make you suffer. (Leonora, Sam and Kieran all break out in laughter)

Domingos– Did that make it easier, that you all knew each other before Jumping straight into this project?

Sam- I think so it brings a certain amount of trust and understanding, you build a dialogue and a language and you know what to expect from each other, so it means stepping forward into the production side of things means you already have peoples back.

Kieran- Also you’re working with friends so you pull your weight so you don’t want to let your friends down. There is also an amount of trust there; I’ve been working on the script for possibly 2 years? I have a job, I do other things but when you get it to a place where you are happy with it, you don’t want to kinda want to hand it off to anyone. You get your friends involved you trust them as you’ve together previously. 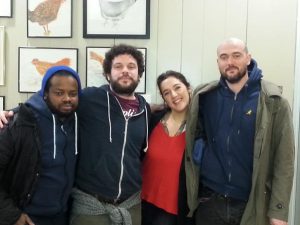 Domingos– Is it basically a unified passion, and a unified goal?

Sam– Yeah we have all been on quite a journey with the script, when it began it was completely different characters, where different genders, character arcs have changed along the way. You can be a bit more cutthroat with your friends.

Sam– No diva moments yet!

Domingos-Are you guys nervous at all ahead of the showing (The Execution of Paddy Flynn)?

Kieran-I was really nervous this morning, Leonora and Sam both still live in London. I’m still living up in Sheffield so a lot of this has been done by email, this morning was the 1st time I had spent  a full day in rehearsal and watched the 1st run and I was laughing and involved in everything I wanted, again that’s friends.

Sam– If I am nervous it’s giddy anxiety that the performers if they nail it could be excellent, I’m nervous for them, if they go out there and perform it then it will be awesome.

Domingos– Are you nervous?

Leonora– No, no, no I just want lots and lots of people to see it because its shame if people don’t. It’s very good show, even from auditions we liked them all didn’t we? There was a lovely dynamic there, like Kieran said’ there was no diva moments. From what I’ve seen from production, there is a real sense of community.

Sam-Vault Festival speaks to a very youthful, very liberal, on the button.

Leonora– Eliza (McClelland) is playing George Mooney how in a lot of jobs it is very relevant, I suppose women doing men’s jobs is a specific topic, not specifically gangsters but interestingly as I’ve been looking at and researching, female gangsters there so many from London that were much more bad-ass, a little bit nastier so maybe it’s a good inspiration.

Domingos-I found out about the project from Leonora, what I like it has a youthful vibe, and is bringing a different perspective on it. I’ve noticed in the last 5-6 years there has been a concerted effort to make theatre, broader, accessible, get the general public more involved, it had an image of being stuffy, but there has been a real effort especially in the independent scene.

Leonora-I went to Goldsmith’s is like a big art’s university but it’s very much performance art, and everything’s very abstract and very much elitist a lot of times, its very vaults in the sense of the feminist pieces that we have been doing. And it’s very interesting how a lot of theatre is more accessible and their trying to change and the people that are going there are trying to widen its circle to try not make it snobby in some parts.

Kieran-My Issue, my struggle is that quite often you are preaching to the converted and there is nothing wrong with that, for example my dad will go and watch this play, and my relatives who are in their 60’s or older., and to be able to invite them into where you have taken in infamous historical male figure and turned them into a female. Then you challenge those people as well (the older generation) l, you do something subtle and change the male lead into a female, you are taking on that idea of gender equality. But he’ll be interested in it because it’s a historical figure that he has heard of.

Domingos– In way you’ve done it in a way that you are not ostracising a certain generation, and subtlety is the trick.  Sam do you have anything to jump onto that?

Sam-It’s exciting for us to be able to explore. When Kieran wrote the play, the character that goes on the biggest journey is this gangster’s niece, this young woman. This sort of change into making her a female all of a suddenly opens up a whole new relationship and whole new story, diverse aspect of the play, this younger character who is accessible.

Kieran– Wonder what will happen when she turns up to watch it? 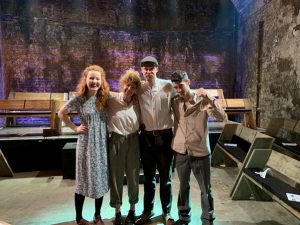 Domingos-What was it specifically that stuck out for you Kieran when you were writing this story that you could delve into this gangster and this age?

Kieran-I used to live in London for years, then I’d moved back home to Sheffield and I was working on another play for a couple of years, I actually had the plot in my head for a long time  and now I was back in Sheffield, I thought I would set it in Sheffield. So I started doing research so I pick a year and started reading about the Sheffield gangs, suddenly you read about it and I know who my characters are now, in the 1st couple of drafts, George Mooney was George Mooney. Then it was through chatting to Sam that he kind of pointed it out to me that you got a bunch of guys telling a girl how to live her life, why do we want to tell that story? again at 1st I fought against it cause he is a guy, I drew a draft with Georgette, when you think about a bloke leading a gang and there is o many clichés and it’s so stereotypical, now when you think of what a woman would had to of had to go through in 1920’s working class Sheffield, you soon think whose that woman got to be? How fierce has she got to be? Compared to what a guy had to be.

Sam-What’s nice about it is that not having to spend 90 pages having to justify it. The human being is still out there, the stakes are set really high.

Domingos-Instead of having to concentrate on the troupes or the stereotypes, you are just making sure the spirit of the character is correct?

Leonora-But I guess it is hard for it not to be stereotypically a female role, that’s good you didn’t fall back into the same trap, oh she’s a female gangster.

Domingos-If its subtle people will just concentrate on the character’ so how did the characters interact with George Mooney in the story? How did they bring out different characteristics in George? Without spoiling anything (everybody laughs out loud).

Sam-We are quite lucky, the plot revolves around George and her gang kidnapping a jockey, having her niece around makes her a target.

Domingos-That is fascinating that obviously it has all to do with the Doncaster Cup, fixing races and there is criminal stuff going on, but it is literally all about the characters and interaction that is the heartbeat of it, which is great right.

Sam– Whatever the plot beneath it is a human story. But it is also a farce on not how to rig a horse race.

Leonora-I guess that’s the fun of it like you said’ it’s not about the horserace but those people in between. That’s what we all love isn’t  it’s about the human story, we look at reality shows now, like Big Brother it’s so successful because it’s just people sitting and talking and theatre is about the human story about their dynamics alongside the farce. And everything they are doing but that’s what makes  you invest so much in those characters, because you learn so much about them and you feel what they feel, and by the end of it you really do experience that emotional rollercoaster.

Domingos-How did you all convey the comedic aspects in your 3 different roles? Leonora producing it, Kieran writing it, and Sam directing, how did you all try and convey it to balance with the darkness of the story?

Kieran– I suppose in writing, and everything Sam says is spot on, but the plot itself It’s not daft, it’s not silly, it gets a little bit out of hand for them (the characters), within the whole play it’s getting further and further away so what you do is you create a plot that is unexpected, I guarantee you nobody will sit down in the first 10 minutes and know where this is going, because the plot moves around quite a lot. What’s then funny is that getting well-rounded and quite serious characters, trying to deal with this situation, which is getting further and further out of hand. All because they totally underestimated this jockey they kidnapped, it’s down to him that it gets further and further away from them. It’s like Rocky chasing the chicken (Rocky movie series)

Leonora -That will be the next pose? (Everyone bursts into laughter)

Domingos -That’s a poster right there! For the sequel?

Sam -The situation itself is funny.

Thanks to Domingos and The Execution of Paddy Flynn team.