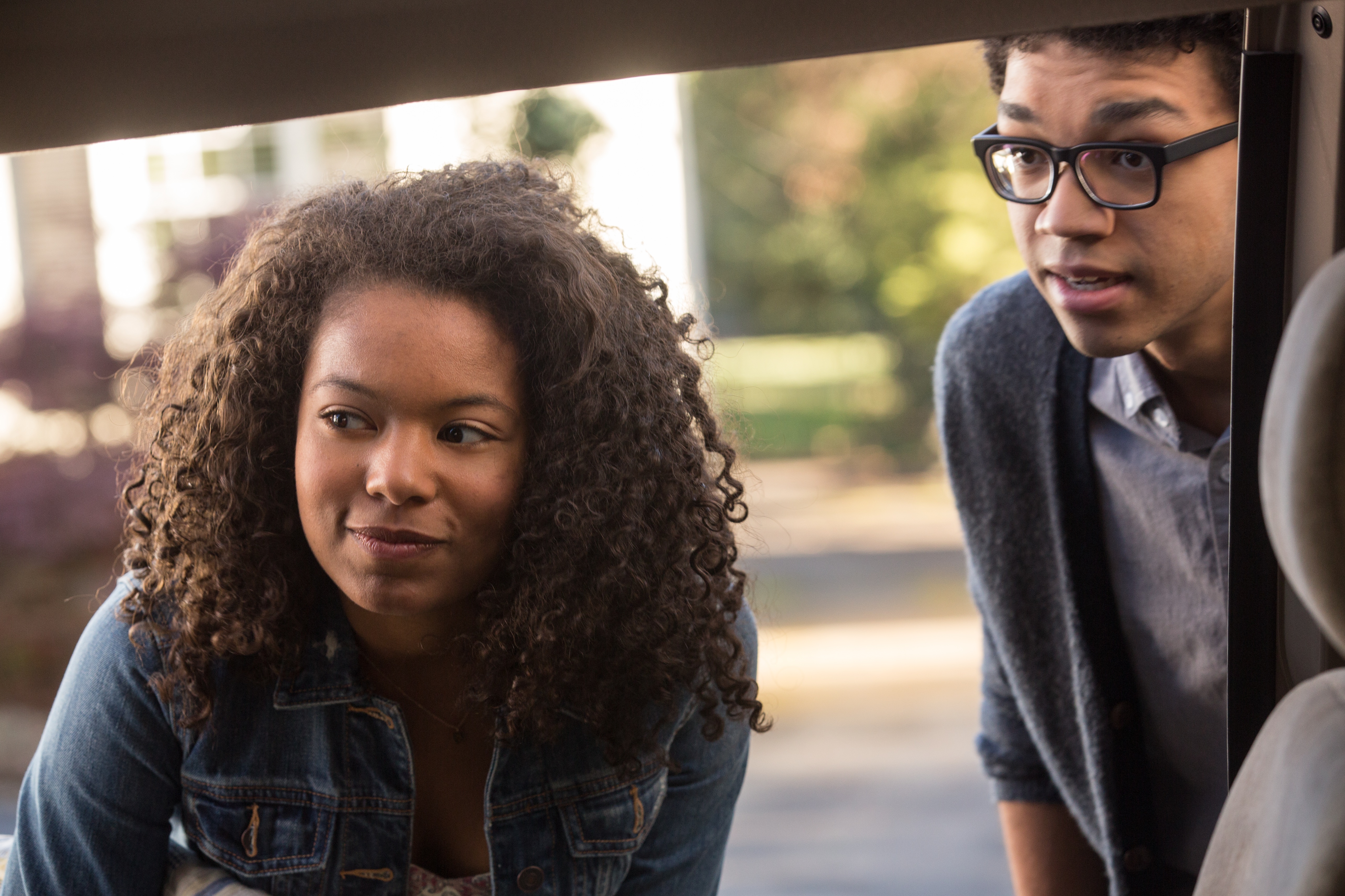 Your character in the film has a bigger presence than she does in the book, so what was that adjustment like?

Jaz: It was so fun for me. The fans had such passionate reactions about that. Either they were so excited or like, ‘No! She’s going to ruin the whole movie!’ No I’m just kidding, it was really fun for me to be able to create a character, and one whose words just fit in me so well. I know where she lives inside of myself so playing that part of myself, like a younger, sweet side was really fun for me. And John was on set so having him be like, ‘Yep, I approve. I like what you’re doing’ felt really good.

What was it like working with John Green? Were you familiar with his work before you got the role?

Jaz: Yeah, I was a big Fault in our Stars fan. Followed the movie and read the book. I’ve read more John Green books now, but at the time, that’s pretty much all I knew about him. I was really excited to meet him because after I saw Fault in our Stars, I was in the theater and was like, ‘Oh God I love that! I want to be in a movie like that. I like the way these guys talk. It felt really real to me.’ To be in a John Green film is a dream come true. He was just so great on set, and excited and kind and funny and brought such a nice energy to the set. I really loved the wide array of teenage characters you see in the film. It kind of feels like a generation movie, similar to The Breakfast Club in a way. Did you feel that too when you read the script?

Jaz: Yeah, for sure. I did. I think that each of our characters are so different and complex. I kind of like how they are presented as stereotypes in the beginning a little bit, like Lacey and the nerdy boys and whatever it is. I like the way they’re presented and I like that through the story as it continues to unfold, you see their complexities and you see that they’re individuals, they’re full, whole human beings in the way that The Breakfast Club does.

Right and you really see how on the outside, like you said the stereotypes might showcase them as being very different, by the end of the film, you really realize that they’re all very similar and they’re all people. I really loved that about the film and the story in general.

One thing that really stood out to me while watching the film is the chemistry between the cast, it felt like it was such a natural chemistry. I have a feeling it translated off screen as well. What was that like? Did you guys spend a lot of time together during filming?

Jaz: We did. We spent all of our time together, whether we were on set or off. We ate together and hung out every night. We saw Dave Chappelle together. We just were together all the time. And it didn’t feel forced. Our chemistry was very natural, it just happened very authentically. Which made it even more wonderful. We just got to play with that and expand on that and just really revel in it and soak it up and use it for the film because it was so authentic that we got to play with it.

What do you love most about Radar and Angela’s relationship?

Jaz: I love Radar and Angela so much. I do. They are so sweet. I just they just represent such a pure experience of first love. I think we can all relate to that. That feeling of the first person you really, really liked. And just really not wanting to mess it up and feeling like if I’m honest with this person, if I speak my truth or do anything wrong they’re not gonna like me because there’s no way they like me and they’re this awesome. I feel like they both kind of feel that. And you get to see them just experience that for the first time and have awkward, honest conversations, which is so relatable because that’s something that we all have to do and especially that first time I feel is so pure and raw and I just love their chemistry. And Justice and I have good chemistry because we’re buddies.

Do you still stay in touch with a lot of the cast and crew?

The film features a pretty epic roadtrip. What is the longest or most fun road trip you’ve ever been on?

Jaz: I’ve been on quite a few road trips actually. I’m a traveler. I’m wanderlusty, I go everywhere I can whenever I can.

I love that word – wanderlusty.

Jaz: Yeah, I love that word too. I have wanderlust. I just wanna go. I wanna go places. But I’ve road tripped from Texas to Florida a couple times, Texas to Colorado, I went from Texas to California which is probably the longest one I went on. I packed up all my belongings in the back of my car to move out to LA when I was 18 with my best friend. I graduated high school, worked for a couple months and moved out to LA to pursue it. Wow, that’s awesome! That takes a lot of bravery.

Paper Towns had – and I know you said you like to travel – Paper Towns had a very extensive press tour – did you get to go to any really cool places to promote the film?

Jaz: Yeah, so I got to be surrounded by people I love, celebrating a project that I’m so proud of on my 21st birthday. I will NEVER forget it! I’ve never felt more beautiful and excited and proud and it was my birthday. It was a dream come true.

On the upcoming DVD, are there any extended or deleted scenes that you are excited for the world to see that we maybe didn’t get to see in theaters?

Jaz: Yeah there are a few deleted scenes. I’m excited for people to see the behind the scenes interviews and the lightning round interviews with Nat and Cara and John. I feel like the behind the scenes stuff expands upon the chemistry that you already feel in the film, and you get to see us live in that chemistry as ourselves which I feel that the fans will really love.

Were there any funny pranks or funny moments that you were a part of?

Jaz: I remember all of us running down the halls of our apartment building, knocking on all the doors of the guys. They didn’t do anything to us, and they didn’t deserve it but we knocked on their doors and then disappeared. And then almost got kicked out of our hotel room for being too loud. So that was fun.

The film is very much about friendship and a coming-of-age story, how did you get into that mindset when you were preparing for the role. Did you think of your own friendships from high school and then draw from that?

Jaz: I did. I mean I kind of just imagined where Angela would fit into my high school a little bit. I imagined the kind of people she would hang out with and the kind of stuff that she would do, and she’s just got a – I wanna say sweetness – but she’s tough, it’s not that she’s a softie, but she’s innocent. There’s an innocence and authenticity about Angela that I just really loved living in. And being around everyone else that is also living in this young space just made me feel like I was in high school again, but better.

What was your favorite memory from the whole process, from beginning to end, what is that one thing that you will never forget about from working on this film?

Jaz: My favorite part of it was my relationships with everybody involved. I’m holding in kind of the same way it does with grandparents, where you think that you know them, and then as you get to know them better they surprise you and you realize that they’re whole, complex, beautiful people and I just remember really coming to appreciate each person involved in this film in that way, just like I do in the script.

Pick up your copy of Paper Towns on Blu-ray or DVD HERE!