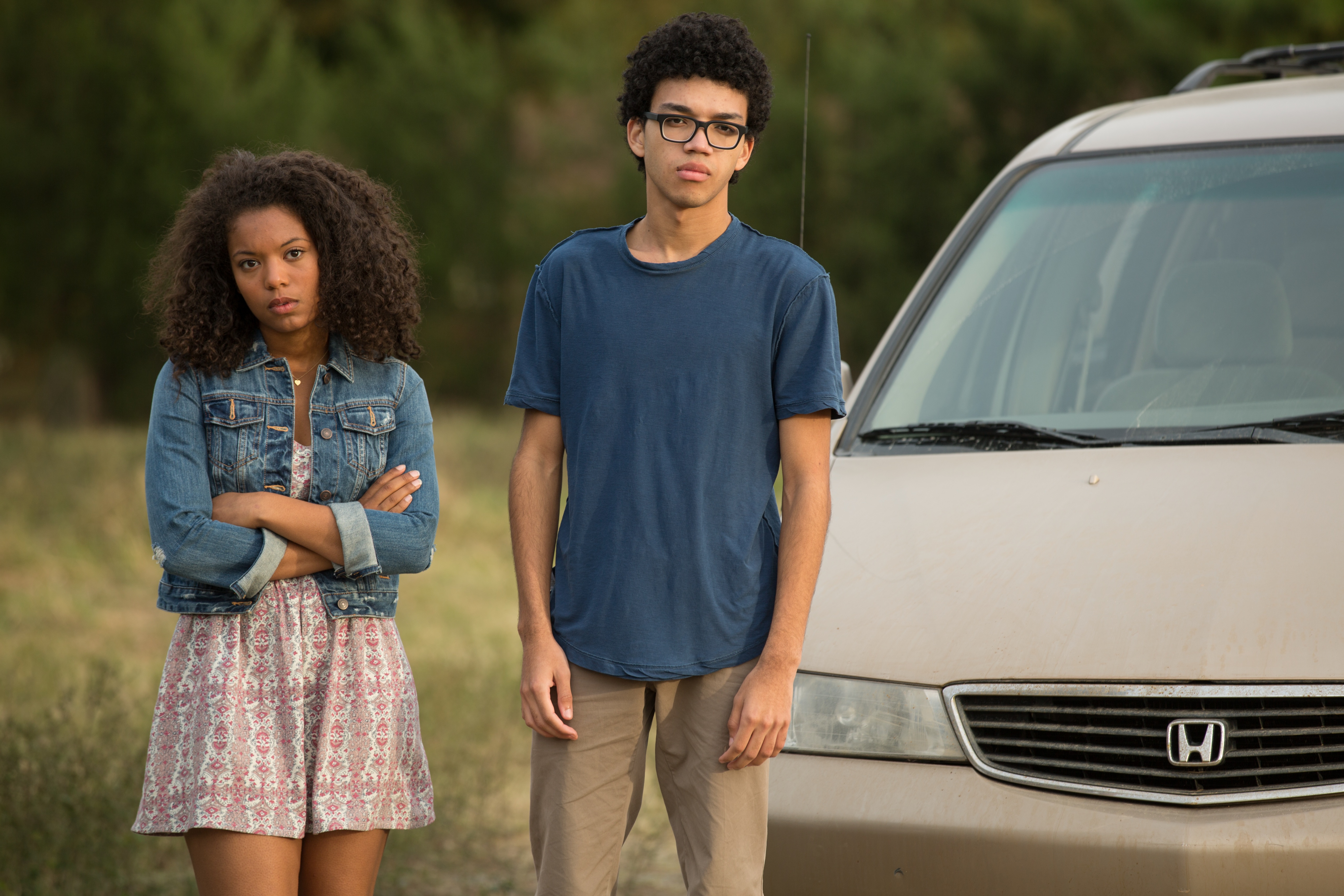 What were some of your questions for John Green for Radar as you prepared to play him?

Justice: I feel like John really trusted us with the characters. At one time we were shooting in the van, and Austin who plays Ben asked John a question about his character, and John responded saying that we know the characters more than he does because we had been living them day-to-day, we had been in their skin. So hearing that just gave me a lot of support and freedom to play and to discover Radar outside of the confines of what’s written in the book. John really didn’t micromanage, which is something you fear when you have the author on set, you worry about their impression, you want to stay true to the book. John really was cognizant about the fact that it’s a completely different medium, so there are things that are going to be lost in the film. He was just there to help us tell a story on film rather than tell the exact story that’s on the page. Justice: Exactly. And the themes are there, nothing is drastically changed but there’s going to be some.

Did the atmosphere feel different when John was there? Was there an added excitement or anything like that?

Justice: John is just a kid. He is so intelligent and he’s so knowledgeable about so many different things. At the end of the day, he’s relatable because he’s young at heart and he’s an artist. I guess he understands where we’re coming from and there was no pressure that I was scared going into it that there was going to be. I felt like my anxieties going into it were mitigated because John was so laid back and so relatable, welcoming and friendly. John was laid back on and off set. He’s still very professional.

What was your favorite moment from filming? What will you take away and never forget from this project?

Justice: There were a lot of friendships that were formed on set amongst the cast and crew that I feel like are going to last a long time in my personal life. Obviously the theme of the story – in terms of perceiving people complexly and not seeing them two dimensionally are things that I’ve struggled with in youth and adolescence, and I feel like everyone struggles with in those periods of their life. The Angela’s are kind of solidified before me because I had to kind of relive those things with Radar seeing his girlfriend as something she’s not and being scared of her, things of that nature. So in reliving those circumstances I was kind of, ‘Oh that’s why I did those things when I was younger, and that’s why other people did these things.’ Just living those circumstances again, living that story of someone who they can’t really see someone deeper than the assumption that they’ve put on them, kind of solidified me how to properly treat people. Right, like you said, there’s a very big theme in this film with that blind infatuation or an idolization of a person, kind of like Que has with Margo, and I think that’s something everyone has struggled with at one point in their lives. In your life, who have you done this with? Is there an actor or someone you idealized that you needed to stop yourself and view them as a human?

Justice: That’s actually a very good question. I think because this is my first film and it had such a concentrated, passionate fan base, I was kind of thrown into a lot of circumstances where I was meeting people I had only seen on television and the internet, people that I had – kind of like everyone else does – imagined only as characters than real people, and so meeting them in person, I was like, ‘Wow, everyone is actually surprisingly normal.’ You kind of just assume that the artist that you see in television and in movies and the works that you read from authors, that these people are just artistry-inclined, not really people, and you meet them and you’re like, ‘wow I have no idea why I didn’t know that before, why I didn’t believe that before.’

I wanted to ask about the Black Santas collection, because that was pretty hysterical. How many Black Santas were on set and what was the funniest one that you saw?

Justice: Oh I wish I knew the quantity! I just remember there was a whole room, one of the very first days I went on set, there was a whole room dedicated to Black Santas. And then I think Jake [the director] went in there and picked the ones that he liked. One of my favorites was the very first one you see in the movie. It moves and I think it sings, and it’s hilarious. The editors did a really good job. After I say the whole Black Santas line, it just cuts to this big face on this giant Black Santa that’s moving and singing. I think it’s hilarious.

What can fans look forward to seeing on the DVD that we didn’t see in theaters?

Justice: There’s so much cool stuff. There’s a gag reel that’s really funny, there’s a lightning round of questions between John and Nat and John and Cara, there’s deleted scenes, there’s alternative scenes where we sing a different song other than the Pokemon song…

Justice: We sing ‘Shake it Off’ by Taylor Swift. [laughs] Yeah, there’s a lot of cool stuff. There’s commentary, there’s behind the scenes, John describing the book, John describing the set, us taking a mini road trip, talking about pranks on set, the dynamics on set. There’s a lot of cool stuff. And it comes out October 20th! It comes out on Tuesday. I’m really excited.

Pick up your copy of Paper Towns on Blu-ray or DVD HERE!