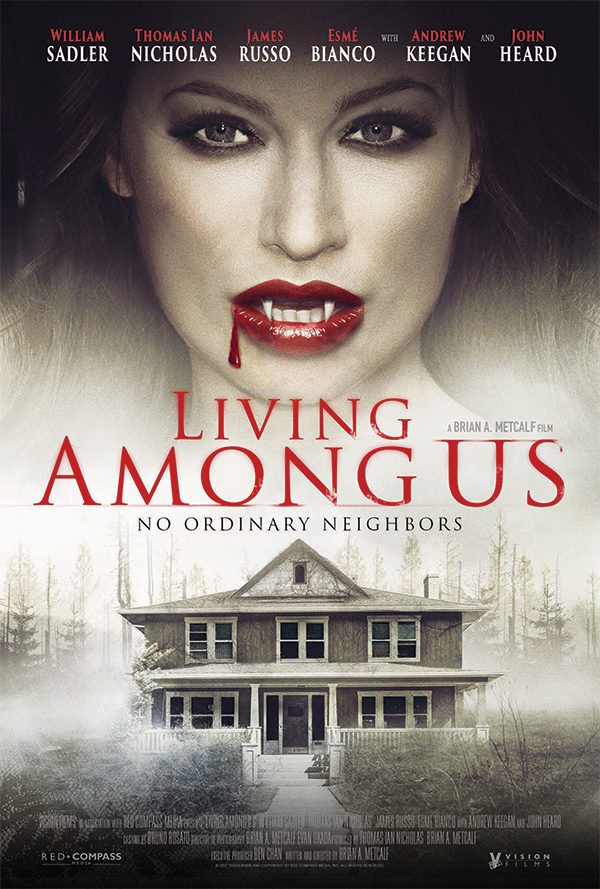 HNS was on the red carpet for the Los Angeles premiere of Living Among Us. Check out our exclusive interviews with the cast and director below! The anticipated supernatural vampire movie Living Among Us from writer/director Brian A. Metcalf will hit select theaters across the country on Friday February 2nd, 2018.

Starring the late John Heard (Home Alone), Ésme Bianco (Game of Thrones), Thomas Ian Nicholas (American Pie), William Sadler (The Shawshank Redemption), James Russo (Django Unchained), Andrew Keegan (10 Things I Hate About You), Jordan Hinson (Eureka), Hunter Gomez (National Treasure), and Jessica Morris (The Wrong Man), Living Among Us is a fresh modern twist on the vampire movie genre. Vampires have been revealed to the world at a blood donation facility by a local news team. Now, the vampires’ sectional leader, Samuel (William Sadler), has spoken out to explain that they wish only to coexist with humans and mean no harm.

Vampires have just made themselves public! A group of documentary filmmakers have been invited to spend time with a family of vampires and learn how they live. But as reality sets in, the crew realizes they are in for far more than they bargained for.

Best known for his role as the father in the Home Alone movie series, Living Among Us is the final movie starring John Heard, who passed away in July 2017. Heard plays the role of Andrew, the father of the vampire family, alongside his wife Elleanor (Ésme Bianco) and their children Blake (Andrew Keegan) and Sybil (Jessica Morris).

When crewmembers Mike (Thomas Ian Nicholas), Aaron (James Russo), Carrie (Jordan Hinson) and Benny (Hunter Gomez) realize things are not what they seem, they risk everything to get as much footage as possible, but must battle to escape the scene alive and reveal their footage to the world.

Don’t miss Living Among Us when it opens at the following list of participating theaters starting Friday February 2nd.