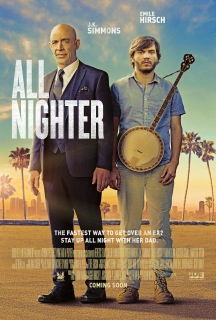 Check out our film review of ALL NIGHTER. SYNOPSIS:  Martin is a struggling LA musician nervously meeting his girlfriend Ginnie’s intimidating father, Mr. Gallo, for the first time. Gallo is a tough-minded, no-nonsense international businessman who never has enough time for Ginnie. At dinner together, Gallo is resolutely unimpressed by Martin, Martin grows increasingly uncomfortable, and the meal is a disaster.

Six months later, Martin’s broken-hearted over being dumped by Ginnie, who has “moved on”, when Gallo shows up at his door looking for his daughter. Her cellphone is off and she has not responded to any texts or emails. Although it’s the last thing he wants to do, Martin is “persuaded” by Gallo to take him to where Martin believes Ginnie is living. Ginnie isn’t there either, and Martin and Mr. Gallo are forced to spend the rest of the day and night together, searching for her all over town. As they attempt to solve the puzzle of what is going on in Ginnie’s life, they encounter her crazy friends and get into increasingly desperate jams of their own making. Some property is destroyed, some laws are broken, but an uneasy friendship between Martin and Gallo is born…. as they discover that they, rather than Ginnie, are the ones who are truly lost.

J.K. Simmons and Emile Hirsch team up for this hilarious yet heartwarming adventure. What I loved about the film is that it kept the story relatable and not too over-the-top. While things certainly got crazy, it didn’t go for some of the BIG moments that other comedies would have. It kept the story grounded. The film also was a big mystery, and we were left wondering the circumstances of the whereabouts of our protagonist’s ex-girlfriend Ginnie up until the very end. It’s interesting that Ginnie as a character is so profound, yet she has very little screen time. There were cute little romances scattered throughout the film that worked with the film, even if the romances weren’t the ones viewers initially expected. The film was set in Los Angeles, and the city almost felt like a character itself. But it wasn’t the typical Los Angeles you see in a lot of other films that highlight the tourist-y areas or the iconic parts of LA. Instead we’re shown the true LA – the parts of LA that locals actually spend time in. As a local myself, I could really appreciate that. The film has a lot of fantastic elements that all came together beautifully – comedy, action, adventure, romance – for a great film experience.