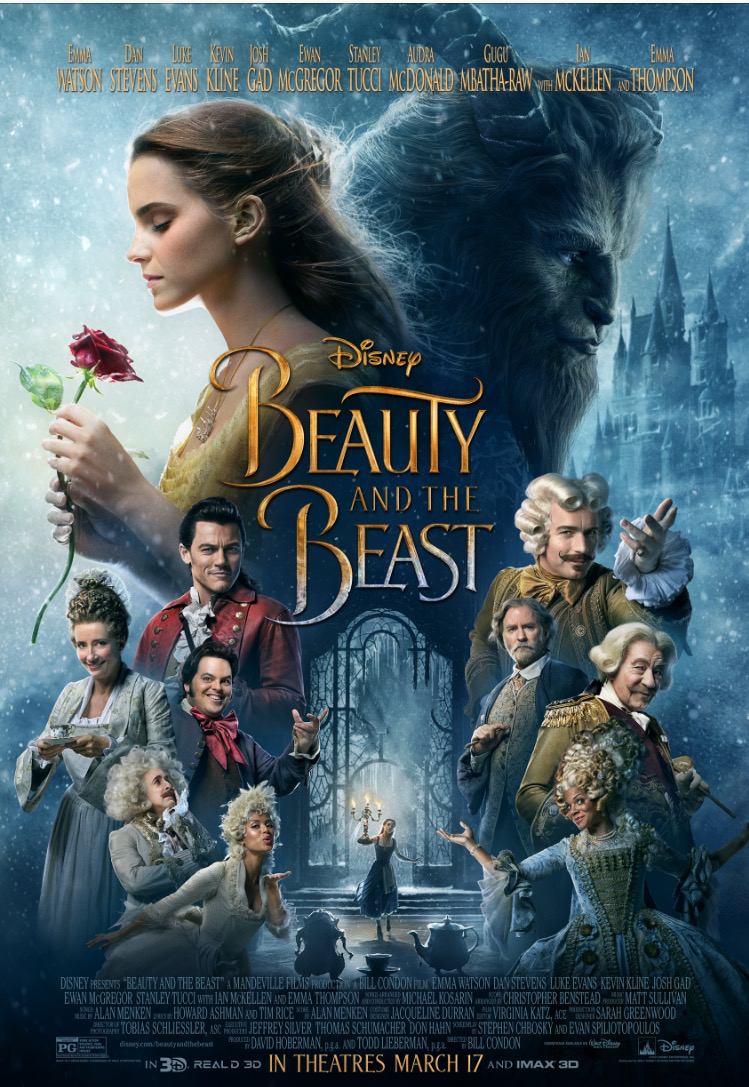 Check out our film review below of Beauty and the Beast! The story and characters audiences know and love come to spectacular life in the live-action adaptation of Disney’s animated classic “Beauty and the Beast,” a stunning, cinematic event celebrating one of the most beloved tales ever told. “Beauty and the Beast” is the fantastic journey of Belle, a bright, beautiful and independent young woman who is taken prisoner by a Beast in his castle. Despite her fears, she befriends the castle’s enchanted staff and learns to look beyond the Beast’s hideous exterior and realize the kind heart of the true Prince within. The film stars: Emma Watson as Belle; Dan Stevens as the Beast; Luke Evans as Gaston, the handsome, but shallow villager who woos Belle; Kevin Kline as Maurice, Belle’s father; Josh Gad as LeFou, Gaston’s long-suffering aide-de-camp; Ewan McGregor as Lumière, the candelabra; Stanley Tucci as Maestro Cadenza, the harpsichord; Audra McDonald as Madame de Garderobe, the wardrobe; Gugu Mbatha-Raw as Plumette, the feather duster; Hattie Morahan as the enchantress; and Nathan Mack as Chip, the teacup; with Ian McKellen as Cogsworth, the mantel clock; and Emma Thompson as the teapot, Mrs. Potts.

Directed by Bill Condon based on the 1991 animated film, “Beauty and the Beast,” the screenplay is written by Stephen Chbosky and Evan Spiliotopoulos and produced by Mandeville Films’ David Hoberman, p.g.a. and Todd Lieberman, p.g.a. with Jeffrey Silver, Thomas Schumacher and Don Hahn serving as executive producers. Alan Menken, who won two Academy Awards® (Best Original Score and Best Song) for the animated film, provides the score, which includes new recordings of the original songs written by Menken and Howard Ashman, as well as three new songs written by Menken and Tim Rice. “Beauty and the Beast” will be released in U.S. theaters on March 17, 2017.

The live action Beauty and the Beast was, simply put, a masterpiece. I loved every aspect of it. I felt that this live-action Belle was a more fleshed out telling of the character from the original animated Belle. Director Bill Condon took this great, iconic character and morphed her into something so monumental. It was as if the original planted the seed and Condon nurtured it into who she was meant to be all along. Belle is the Disney princess little girls need. She is the original feminist. She’s intelligent. She’s kind. She’s non-gender conforming. She views the world in a way no one else does. She sees it for what it could be and encourages little girls to learn and be empowered, everything that sets the framework for feminism in the future. She is in a way, the anti-princess, she is not afraid to go out there and fight for what she believes and stand up to those who demand things from her she has no interest in. She is much more a hero than a princess, and I love that little girls everywhere will be watching this.

This Beauty and the Beast was modernized, all the while staying true to the classic. There were elements of diversity sprinkled throughout (two interracial couples, a gay character, cross-dressing) but all done in a way that didn’t feel shoved in our faces. Instead it fit beautifully and made sense to the characters and the story. It’s also pretty revolutionary of Disney to have the courage to incorporate these things into a classic fairytale, so a huge shout out to the studio!

I thought every single actor was perfectly cast. Emma Watson was born to play Belle. Luke Evans brought Gaston to life in a way I didn’t feel in the original. He and LeFou, played by Josh Gad, had me cracking up. Dan Stevens as the Beast was done brilliantly. Can we talk about those eyes for a second?! Breathtaking. There really isn’t any aspect to the film that I would change, it was truly a beautifully done film. I can’t stress enough how much I highly recommend this film! Go see it now!

Disney’s Beauty and the Beast opens in theatres March 17!