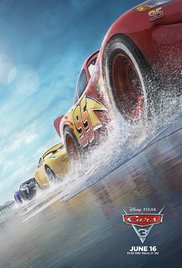 Check out our film review of Disney’s ‘Cars 3’ below! The first Cars movie was essentially about a hotshot athlete learning humility on Route 66. The second threw James Bond spy thriller elements into the mix. Cars 3 – which hits theaters today – is something else entirely. This is the first installment that can actually hold a candle (or should we say a spark plug?) to the emotional resonance of its fellow Pixar films, easily making it the best of the bunch.

During an opening race montage, we meet Jackson Storm (Armie Hammer), a next-gen high-tech model, who swiftly relegates McQueen to being yesterday’s news. No matter what he tries, Lightning can’t seem to beat Jackson – and after a serious crash (which we saw snippets of in the trailer), he’s sidelined completely. Can he race again? Should he? Despite the odds, McQueen is determined to return to the track – and he gets the chance, thanks to a slick new sponsor, Sterling (Nathan Fillion) and a cheerful trainer, Cruz Ramirez (Cristela Alonzo).

This premise sets up for a surprisingly impactful tale of glory days, growing old, and passing the torch. Lightning is committed to ending his career on his own terms (“I decide when I’m done”), but he is also forced to acknowledge that he’s not the racer he once was. His journey not only brings delightful new characters like Cruz into play, but also casts renewed importance on old ones – particularly Doc Hudson (Paul Newman), Lightning’s now deceased mentor from the first film. The parallels between Doc and Lightning’s racing careers are clearer than ever, and McQueen’s reflections on his mentor bring emotional moments from Doc’s backstory that were only hinted at before to light.

The result is a satisfying, emotionally resonant story that hits harder than Cars or Cars 2 by far. If that sounds a little heavy, rest assured that there are plenty of funny moments and entertaining set pieces – including an accidental visit to a demolition derby, humorous training montages, and an evening with several older racecars trading war stories. The climax is somewhat (but not entirely) predictable, but still successful. And the lessons are on-point for all ages.

Cars 3 is in theaters today!