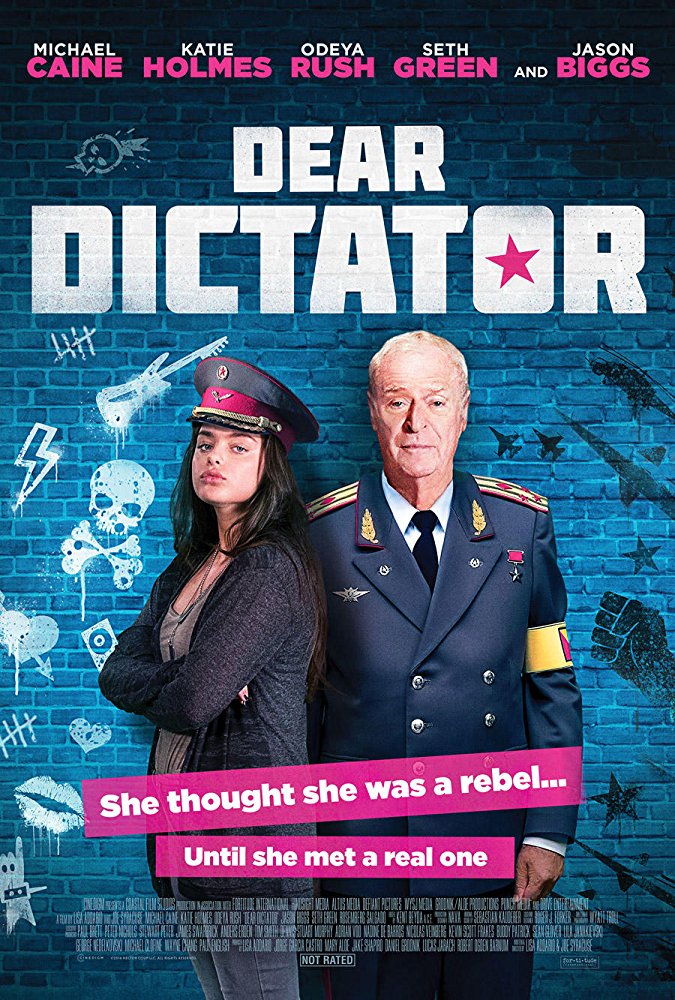 When political turmoil forces a British-Caribbean dictator to flee his island nation, he seeks refuge and hides with a rebellious teenage girl in suburban America, and ends up teaching the young teen how to start a revolution and overthrow the “mean girls” in her high school.

The premise of Dear Dictator feels like a high school comedy dream but unfortunately the implementation falls short in some places. After watching the film it feels like the direction of the film changes several times over its duration. Am I watching a dark comedy, slapstick, social satire, or gross out comedy? Outside of the implementation I have questions about the central casting, though even with all those qualifications I can’t say there weren’t parts of the film that made me smile.

Tatiana (Odeya Rush) spends the first third of the film being too one dimensional she seems to be a rebel without a cause it takes longer to accept her as an interesting and motivated character and I think that might put viewers off. Looking at her family situation and a mother is barely more mature than her daughter we start to understand and appreciate the strength of Tatiana even if we might question her taste in role models.

Once the film gets going past the initial third things start looking up and we start to see a more nuanced Tatiana someone interesting and a little more articulate about what it is she actually wants. One of the things the film carries off reasonably well is her journey Darlene (Katie Holmes) is a young mom who appears to have never grown up and actively brings her daughter on trips to spy on her lover, her married boss Dr Seaver (Seth Green). Her relationship with her daughter is strained and the one with her boss can really only be described as troubling. Some of the choices made by the filmmakers with Darlene are hard to watch.

Michael Caine plays General Anton Vincent and while I may like the actor the casting choice is tone deaf to say the least. A white dictator with a clear British accent running around executing the black and brown populace of a Caribbean nation is a massive hump at the beginning of the film for the audience to climb over in order to get to the actual meat of the film

The soundtrack of this film is something I cannot criticise while I may not know much about punk pop bands it fits the feel of the film perfectly. It also serves to keep the feel of Dear Dictator rather light even while things on screen might not be described as such.

The supporting cast are ok if not especially standout though I will single out Jason Biggs as teacher Mr. Spines who takes too much of an interest in his student as making an impression. Love interest Denny (Jackson Beard) is an interesting choice with his evangelical Christian upbringing fighting an escalating battle with his teenage hormones.

The ending of the film feels like a hard right turn into an ending that seems more suited to a Disney TV movie than a film that features a dictator in one of the starring roles. I won’t say anymore than that but it felt like a strange choice.
Overall Dear Dictator takes on a somewhat surreal and comedic journey which I think is worth going on, its roughness in parts can be forgiven in my view because of the ambition of the project. Its enjoyable as popcorn viewing and I think more than likely to generate a few laughs along the way.