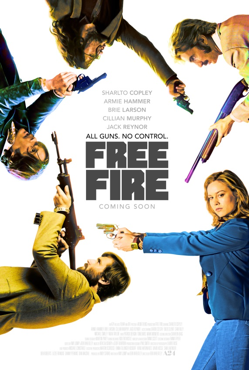 Check out our HNS film review of the action-packed Free Fire. Bold, breathless and wickedly fun, Free Fire is an electrifying action comedy about an arms deal that goes spectacularly and explosively wrong. Acclaimed filmmaker Ben Wheatley (Kill List, High Rise) propels the audience head-on into quite possibly the most epic shootout ever seen on film as he crafts a spectacular parody –– and biting critique –– of the insanity of gun violence. Everyone’s got a gun, and absolutely no one is in control.

Set in a colorful yet gritty 1970s Boston, Free Fire opens with Justine (Oscar® winner Brie Larson), a mysterious American businesswoman, and her wise-cracking associate Ord (Armie Hammer) arranging a black-market weapons deal in a deserted warehouse between IRA arms buyer Chris (Cillian Murphy) and shifty South African gun runner Vernon (Sharlto Copley).  What starts as a polite if uneasy exchange soon goes south when tensions escalate and shots are fired, quickly leading to a full-on Battle Royale where it’s every man (and woman) for themselves.

Packed with witty one-liners, flamboyant characters and remarkable feats of cinematic gunplay, Free Fire is a full-throttle action extravaganza that keeps things fresh and fun with Wheatley’s alternately buoyant and savage sense of humor. Swinging from the madcap to the macabre and back again, the film is an exhilarating experience that will leave you quite literally blown away.

I never knew I could laugh so much at a movie that was all about people killing each other. And I say that as a compliment. My favorite part of the film was that it didn’t take itself too seriously. It fully divulged in comedy and hilarious moments were sprinkled throughout the film. This played out well in the execution (pun intended) of the film so that audience members were less taken aback with the violence/ gore of the film. The humor appropriately gave audiences a break and made the film lighter.

Almost the entire film takes place in one location. This was a very unique approach that you don’t really see used in films anymore. This aspect resembles a play, and I thought this was an interesting aspect that made the film distinct. The story itself was complicated and kept audiences on their toes, as just when you think you’ve figured out the alliances, another person switches teams. You’re left often not knowing who the “good guys” and who the “bad guys” are. This was a fun aspect.

If you like funny, action packed films and aren’t afraid of a LOT of violence or gore, then this is definitely a film you should check out.