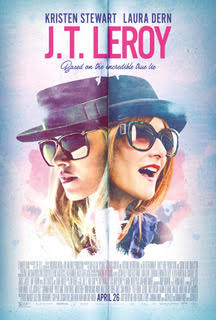 We got to see an advanced screening of upcoming indie film ‘J.T. LEROY.’ Check out our review of the film below!

Rating: R for language throughout, sexual content, and brief nudity

The film is based on the true story of a literary hoax created by author Laura Albert and a series of books she wrote pretending to be teen prostitute Jeremiah “Terminator” LeRoy. The books told the story of his life with his mother, Sarah, and the many forms of abuse he experienced with her.

Laura was able to initially pose as JT LeRoy because she only communicated with people giving phone interviews or by email. She attended public events on his behalf pretending to be a Brit named “Speedie” telling everyone JT’s acute shyness kept him away.

She created an impressive following that included many celebrities (Courtney Love has a cameo) and realized after a few years she was going to eventually need a real JT LeRoy to make public appearances to satisfy the fans.

This issue is resolved for Laura (Laura Dern) when her boyfriend Geoff (Jim Sturgess) invites his sister Savannah (Kristen Stewart) to live with them in San Francisco.

Savannah’s androgynous look and shy demeanor makes her the perfect JT and Laura immediately attempts to convince her to take on the persona for a public appearance. Savannah says no at first but after reading Laura’s book, she is captivated by the story and decides to do it.

This begins a six-year stint of her pretending to be JT LeRoy and Savannah later tells her boyfriend Sean (Kelvin Harrison, Jr.) “I feel compelled to do it. Technically, it’s lying but it feels like a performance and I want that feeling.”

Laura and Savannah are swept up in a whirlwind of public appearances and celebrity parties as JT’s fame continues to grow; however, things get really complicated when Savannah falls in love with movie producer Eva Avelin (Diane Kruger) who wants to make a movie about JT LeRoy. Laura feels she is losing control of the whole situation and uses her master manipulating skills to get things back on her desired path.

Neither Laura or Savannah is comfortable in her own skin so playing dual roles in their lives eventually takes a toll on them and the people around them in many ways. The revelation at the end that everything is a hoax is almost a relief for everyone.

Kristen Stewart and Laura Dern give exceptionally strong performances and were perfectly cast for their roles…it was quite impressive how both women fully embodied their characters. I also enjoyed the performances of Jim Sturgess, Diane Kruger, and especially Kelvin Harrison, Jr. whose natural acting ability is a joy to watch. I look forward to seeing his future projects.

The movie begins with an Oscar Wilde quote: “the truth is rarely pure and never simple” and by the end of the film we realize this story is truly the perfect example of it.