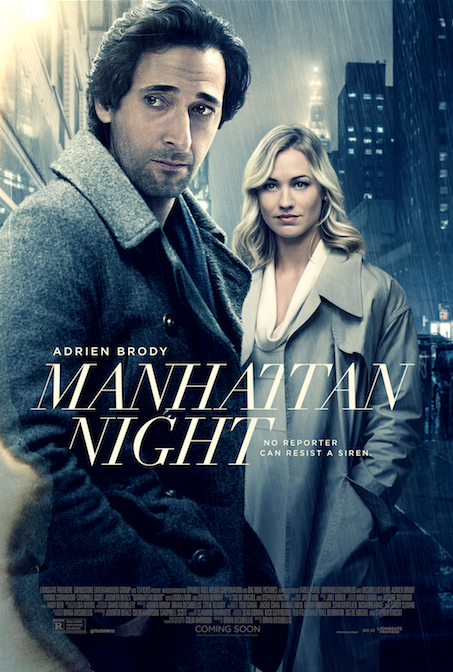 Check out our film review of Manhattan Night, opening in theaters and on demand May 20. Adapted from The New York Times’ Notable Book of the Year by Colin Harrison, MANHATTAN NIGHT tells the story of Porter Wren (Adrien Brody), a Manhattan tabloid writer with an appetite for scandal. On the beat he sells murder, tragedy and anything that passes for the truth. At home, he is a dedicated husband to his wife (Jennifer Beals) and father. But when Caroline (Yvonne Strahovski), a seductive stranger asks him to dig into the unsolved murder of her filmmaker husband Simon (Campbell Scott), he can’t resist. In this modern version of classic film noir, we follow Porter as he is drawn into a very nasty case of sexual obsession and blackmail  – one that threatens his job, his marriage, and his life.

It’s a cat-and-mouse chase of events between Adrien Brody’s Porter and Yvonne Strahovski’s Caroline. Porter as a protagonist is very hard to like at times. There’s a lot of sex, infidelity, scandal and at the core of it all is a man who wants to have his cake and eat it too. From a viewer’s standpoint it’s hard to know whom to trust at any given moment, and that’s part of the fun here. It makes for a thrilling experience and one that will leave it difficult to peel your eyes away from the screen.

Without giving too much away, there’s a moment in the film about half way through in which Porter says to Caroline that she will not do something ever again. He says this matter-of-factly, and not questioningly. What’s questionable is his timing, and his peculiarly placed hands. This scene in particular stood out to me and I felt was excellently written and portrayed. It was the moment in the film when I started to question everything – which is exactly what a thriller should do.

As with a lot of mysteries, the biggest piece of solving the puzzle here was motive. What is each character’s motive for their actions and did the film make this believable enough? That answer is yes. And that’s exactly why the story here works. Some motives were very obvious, like Hobbs (played brilliantly by Steven Berkoff) and the scene in which his secret is finally revealed was a true showcase of vulnerability and humanity. Porter’s motive was less obvious, but his self-destruction and involvement in the story was a direct result of his journalist profession. At the heart of every reporter is a thirst for knowledge, truth. Porter embodied that persona to a T in the film. But what are the repercussions of that? When you finally get the truth, what’s left? For Porter, it was emptiness. This deep desire for truth ultimately led to self-destruction and self-loathing, and he said it best with the line, “The ugliness of who I’ve been and who I am now is strongest when I get to see my children.”