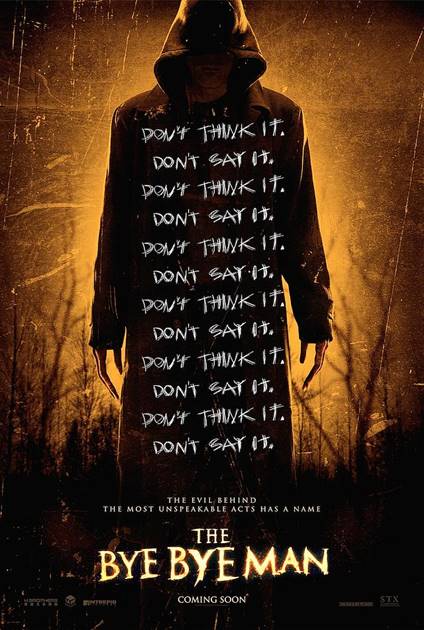 Check out our film review of The Bye Bye Man, in theaters everywhere tomorrow! People commit unthinkable acts every day. Time and again, we grapple to understand what drives a person to do such terrible things. But what if all of the questions we’re asking are wrong? What if the cause of all evil is not a matter of what…but who?

From the producer of Oculus and The Strangers comes The Bye Bye Man, a chilling horror-thriller that exposes the evil behind the most unspeakable acts committed by man. When three college friends stumble upon the horrific origins of the Bye Bye Man, they discover that there is only one way to avoid his curse: don’t think it, don’t say it. But once the Bye Bye Man gets inside your head, he takes control. Is there a way to survive his possession?

Debuting on Friday, January 13th, this film redefines the horror that iconic date represents—stretching our comprehension of the terror this day holds beyond our wildest nightmares.

The Bye Bye Man featured a trio of college students (a couple and the man’s best friend) that just moved into a new house with major creepy vibes. This initially set the tone like a lot of other horror films, however the film was unique in that it deviated from there and instead became much more of a psychological thriller. Much of what happened next was a result of the characters’ own thinking and their inability to stop thinking about it. It really reminded me of the whole “Don’t think of an Elephant” framework that is featured in a novel by George Lakoff. To drastically sum up what this means, if someone says to you, “Don’t think of an elephant!” what’s the first thing you think of? An elephant. A similar concept is the focus of the film.

The “bad guy” – the Bye Bye Man – is very rarely seen in the film. This adds to the illusion and at times makes you even more on the edge of your seat. It kept me guessing who/what is this guy? Though we aren’t give too much backstory on the answer to that question, the characters especially can’t let this go and continue to research this, which ultimately lead to their demise. At the end of the film, all three characters were so delusional, that audiences are no longer able to decipher the truth in the moment either. The final few scenes of the film had the audience I was in gasping in shock from their seats! The Bye Bye Man is like a collection of different horror movies but with its own story. At times it reminded me of Candyman, at times it reminded me of Shrooms. So if these films, or the horror genre in general are up your alley, you will also be a fan of The Bye Bye Man!

The Bye Bye Man opens in theaters tomorrow on Friday the 13th!