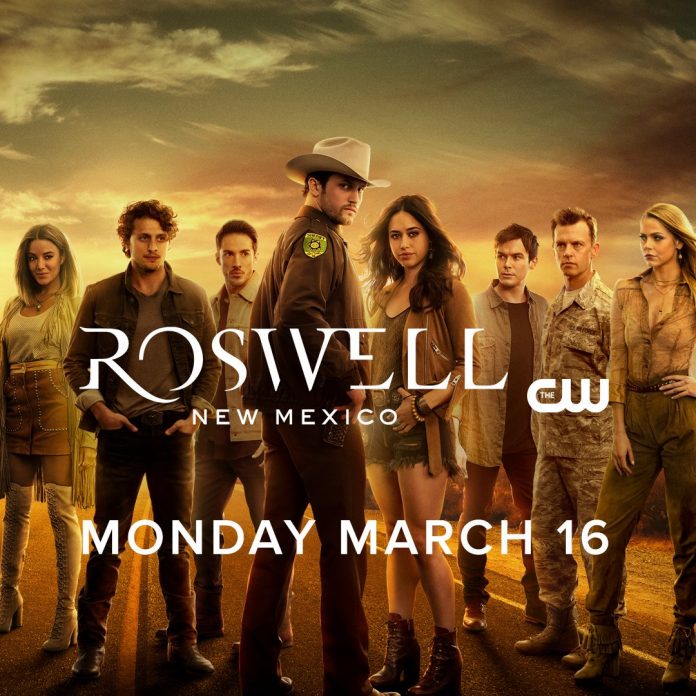 The second season of “Roswell, New Mexico” got its premiere date last week and I am beyond excited!! It’s hard for me to believe that just back in October when I was assigned to interview the cast at New York Comic Con, I literally knew nothing about the show. I was so captivated by the cast and showrunner Carina Adly Mackenzie that I came home from the con and binge-watched the first season on Netflix. Now, I am a total Roswell fan-girl! Here are the 5 main reasons why the NYCC round table interviews led me to devour the first season:

1.) Lily Cowles (Isobel Evans-Bracken) said she could not put her Episode 6 script down once she received it, much like how she had read The Harry Potter series.

When I was talking to the cast, they were in the process of shooting Episode 5 of the upcoming second season and Lily’s excitement and praise for the show’s writers was palpable. I just HAD to know more after the chat.

When Carina (showrunner/executive producer) and executive producer Christopher Hollier made it their mission to feature actors depicting different body types and/or disabilities on their show, they soon found out that the industry is less than supportive of such an endeavor. Carina says that “at the agency level such actors are simply not being represented and so they aren’t even getting into the room” (for auditions). However, that’s not going to stop Carina and Chris from pursuing these casting avenues and the second season even features a transgender character. Carina, you rock!!

3.) Tyler Blackburn is serious about depicting his character of an injured gay veteran both proudly and accurately.

Ok, first of all I was simply enthralled with the sincerity and charisma of Tyler. He is acutely aware of all the nuances to his character that “aren’t written but that you have to think about.” I needed to experience him on screen for myself.

4.) Michael Vlamis discussed being pushed to a breaking point when directed by Julie Plec (executive producer) during a Season 1 episode.

I don’t know about you but I’ve been a huge fan of Julie Plec’s since “The Vampire Diaries” (truly phenomenal show in my humble opinion). I was intrigued to know she has a hand in this show as well, and I love to see actors like Michael confess to being challenged to a true emotional brink but yet realizing how “fulfilling” it is in the end.

When Jeanine and Nathan finally reached our table, I immediately saw a great chemistry between the two. Not since my days of watching the romantic trio of Stefan, Damon and Elena have I experienced both a subtle but yet truly organic spark. It was evident that these two would be able to deliver the tender but angsty type of romance I love.

There have also been some additions to the cast for Season 2!

It was announced at NYCC that Gaius Charles (Friday Night Lights) will play a recurring role as a local farmer named Bronson. In addition Jason Behr (the original Max Evans in the 1999 Roswell series), will have a recurring role the identity of which remains a mystery so far. Finally, on Monday it was announced that Jamie Clayton (Sense8) will recur as Agent Grace Powell. According to Carina’s Twitter post, she had been trying to cast Clayton since the beginning of Season 1 and “we finally made it work!”

So there you have it! If you do not watch the show already I hope I have convinced you to check it out, you won’t be disappointed. You have plenty of time to catch up with Season 1 via Netflix and you can also stream it free via The CW app. I hope you will join me in watching the season 2 premiere of “Roswell, New Mexico” Monday, March 16th on The CW!