Jamie Parker, Noma Dumezweni, and Paul Thornley have been cast in Harry Potter and the Cursed Child. Check out the news below! 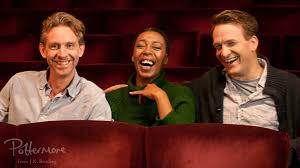 The producers of stage play “Harry Potter and the Cursed Child” have revealed that Jamie Parker, Noma Dumezweni and Paul Thornley will lead the cast as Harry, Hermione and Ron.

Jack Thorne wrote the play, which is based on a new original story by J.K. Rowling, Thorne and John Tiffany, who is also the play’s director. The play catches up with Harry as an adult, working for the Ministry of Magic, and a husband and father of three school-age children. “While Harry grapples with a past that refuses to stay where it belongs, his youngest son Albus must struggle with the weight of a family legacy he never wanted,” according to the production notes. “As past and present fuse ominously, both father and son learn the uncomfortable truth: sometimes, darkness comes from unexpected places.”

Rowling said: “I’m so excited with the choice of casting for ‘Harry Potter and the Cursed Child.’ I can’t wait to see Jamie, Noma and Paul bring the adult Harry, Hermione and Ron to life on stage next summer.”

The play, which is produced by Sonia Friedman Productions, Colin Callender’s Playground Entertainment and Harry Potter Theatrical Productions, will receive its world premiere at London’s Palace Theatre in the summer of 2016. Further casting for the company of more than 30 will be announced at a later date.

Parker is currently playing Sky Masterson in “Guys and Dolls” at the Savoy Theatre, a role he previously performed at Chichester Festival Theatre, where he has also been seen in “Drama,” “Holes in the Skin,” “Seagulls,” “The Coffee House,” “The Commuter” and “The Gondoliers.”

His other theatre credits include “High Society” at the Old Vic, “Assassins” and “Proof” for the Menier Chocolate Factory, “Candida” for the Theatre Royal Bath, “Cat on a Hot Tin Roof” for the West Yorkshire Playhouse, “Henry V,” “Henry IV” parts one and two, “A New World” and “As You Like It” for Shakespeare’s Globe, “King James’ Bible,” “The Revenger’s Tragedy” and “The History Boys,” all for the National Theatre, the latter also on Broadway, “Rosencrantz and Guildenstern Are Dead” for the Theatre Royal Haymarket and Chichester Festival Theatre, and “Between the Crosses” for the Jermyn Street Theatre.

Dumezweni is currently playing the title role in “Linda” at the Royal Court Theatre. Her other theatre credits include “A Raisin in the Sun” for the Young Vic at the Lyric Hammersmith, for which she was the recipient of the Olivier Award for best performance in a supporting role, “Feast and Belong” also for the Royal Court, “A Human Being Died That Night” at the Hampstead Theatre and Brooklyn Academy of Music, New York, “Carmen Disruption” for the Almeida Theatre, “‘Tis Pity She’s a Whore” for Shakespeare’s Globe, “Henry V” at the Noël Coward Theatre, “President of an Empty Room” and “The Hour We Knew Nothing of Each Other” for the National Theatre, “Macbeth,” “Breakfast With Mugabe,” “The Winter’s Tale” and “Romeo and Juliet” for the Royal Shakespeare Company and “The Bogus Woman” for The Red Room, Traverse and Bush theatres.

Her film credits include “The Incident,” “Dirty Pretty Things” and “Macbeth.” Her many television credits include “Casualty,” “Capital,” “Frankie,” “Doctor Who,” “Summerhill,” “EastEnders” and “Fallout.” Dumezweni will make her directing debut at the Royal Court Theatre in February with “I See You” by Mongiwekhaya.

Thornley played the role of Dodge in “London Road” at the National Theatre before going on to play the same character in the film version, both directed by Rufus Norris.

His other theatre credits include “A Chorus of Disapproval” at the Harold Pinter Theatre, “The Three Musketeers” for Kingston Theatre, “It’s a Wonderful Life” for the Wolsey Theatre, Ipswich, “The Miracle” for the National Theatre, “Private Fears in Public Places” at the Stephen Joseph Theatre, the Orange Tree in London and the 59E59 Theaters in New York, “Noises Off” at the National Theatre, Piccadilly and Comedy theatres, “Spend, Spend, Spend” for West Yorkshire Playhouse and the Piccadilly Theatre, and “A Midsummer Night’s Dream,” “All’s Well That Ends Well,” “The Tempest” and “Kiss Me Kate,” all for the Regent’s Park Open Air Theatre.

On television his credits include three seasons of “Life Begins” for Granada, where he played opposite Caroline Quentin, “Father Brown,” “Doc Martin,” “Just William,” “Mutual Friends,” “Trollied,” “Big Bad World” and “Above Suspicion.” As well as “London Road,” Thornley’s film credits include “Man Up,” “Metamorphosis,” “The Somnambulists,” “Les Miserables,” “Camera Trap” and, most recently, “Grimsby,” the new Sacha Baron Cohen film. Thornley is currently filming “The Crown” for Netflix and will also appear in the as yet untitled forthcoming James Marsh film.

“Harry Potter and the Cursed Child” is one play presented in two parts. Both parts are intended to be seen in order on the same day (matinee and evening), or on two consecutive evenings. Previews begin June 7 with the opening performances of Part One and Part Two on July 30.