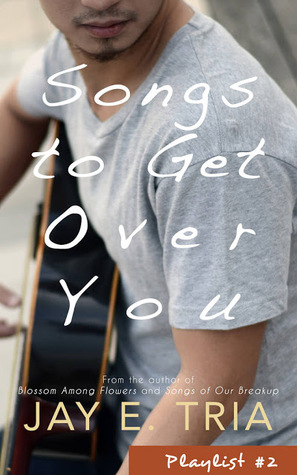 It’s harder to get over someone who was never really yours.

They say rock stars get all the girls. But Miki knows that’s not always true. He, for one, though the guitarist of popular indie band Trainman, just can’t seem to get the girl. It’s kind of his fault, really. No one told him to fall in love with Jill. No one told him to stand still and watch as she moved on from a terrible breakup into the arms of another guy—a Japanese celebrity with the face of an angel and the body of a god.

So when someone else comes along, someone who finds him cute, smart, and funny (sometimes in the haha sort of way), will Miki finally move on? Or will he continue to pine for Jill?

You can listen to my Songs to Get Over You playlist on Spotify. You can see the tracklist on Tumblr.

Songs to Get Over You solidifies my love for Playlist series. This is where my love for Miki has grown into something more. I like to call this book as an unrequited love with a happy ending.

This standalone sequel follows the story of Miki. He’s the best friend of Jill, he’s also the guitarist of indie band Trainman. He’s hopelessly in love with Jill, and she doesn’t have any idea. Given that a popular Japanese celebrity is also in the equation, he couldn’t catch a break. Meet Ana, the unironically self-proclaimed groupie of Trainman. There’s a twist, she’s also hopelessly pinning for Miki despite him having his sight elsewhere. There’s going to be a bunch of failed attempts at dates. You shall see if there’s going to be a happy turnout for this unrequited romance.

I adore Miki, and this is where he gets to shine on his own. I like seeing him grow. *throws pompoms in the air* Though, it was Ana that caught my attention. She was briefly introduced in Songs of Our Break Up. She earned the moniker “groupie” which simply stuck with me. She made Songs to Get Over You more enjoyable and relatable. She gave it a life.

Ana is unconventional. She’s the character who has nothing to be ashamed of. She’s brazen. She’s not afraid to go after her own dreams. She makes them into reality. Her fearless personality played a significant part in shaping the romance of the story. She gave it a life. A spark. She and Miki had several disastrous dates, but that didn’t deter her from pursuing him–from chasing him down despite knowing he’s not as invested as she was. An ordinary girl would’ve probably given up, but not her. She’s a girl who goes after her own heart. She always makes the first move. Ana deconstructed the sexist propriety standard for women, specifically Filipina. Wait for the guy to make the first move. That’s why I fell in love with her. Songs to Get Over You didn’t yield to that biased guideline.

I’m liking the sound of silence

Walls closing in on the distance

Feels good to find the one way

To get my air back from you

I’m a man trying to get over you

It’s such a chore getting over you.

I’m sharing one of my favorite songs from the book. I love that there are several songs attached to this. As always, I am weak for painfully elegant writing.

Verdict: I love this book a lot. Ana and Miki are officially my second favorite otp (Ryke and Daisy will always be the first). Songs to Get Over You is a standalone novel, but you might as well follow the recommended reading order.