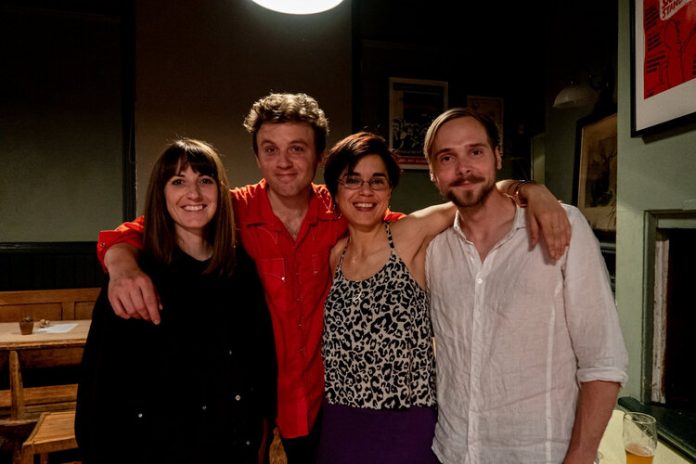 We had the opportunity and privilege to conduct an interview with Erifili Missiou, who answered questions regarding the upcoming film festival she founded, gave advice for aspiring young filmmakers, spoke about her origins and love for film, and much more. She went in depth about the film industry and her vision for it and her creative inspirations growing up.

1. DC- What inspired you to create “The Emerging Filmmakers Night Festival”, the origins of EFN Short Film Festival?

I was fresh out of Film School in 2017 when my graduation film got accepted by a couple of international film festivals. I managed to attend one of them but none of my friends, crew and family were able to make it due to either time or financial restrictions. I suddenly became aware how hard – and costly – the festival circuit is to crack when you are a new filmmaker. And even if your film does get selected by a festival, it’s usually in a remote part of the world where your crew and friends are unlikely able to travel. I created EFN Short Film Festival to provide London-based new filmmakers the platform and community to celebrate their work and network with like-minded artists.

2. DC- Why is Independent Filmmaking important to you?

Stanley Kubrick, Agnes Varda, Spike Lee and many other incredible filmmakers learned their craft by making independent films at the beginning of their career.

As a filmmaker, independent cinema is the testing ground to hone your craft and experiment with your ideas. Also, because the big studios keep their noses out of your business, you have the opportunity to go to very interesting places. Hence why directors’ first feature films are quite often creatively bold and unmatched in quality by their subsequent films.

I also adore the camaraderie in a film crew full of early professionals who embark on a mad journey for little money and for the sake of a crazy idea.

So, the question should be what is NOT to love about Independent Filmmaking?

3. DC-What was the first film you remember watching?

It’s a ridiculous and scary story. My mother had taken me to a screening of the “Alien” (the 1981 classic), which she loved from the years of her youth. For some reason it didn’t even cross her mind that this might be an inappropriate watch for a five year old. So I was watching it serenely and totally unprepared for the legendary “chest burster” scene where the Alien explodes out of a man’s chest. Needless to say that it freaked me out for years. And that’s a nice little tale about the dangers of entrusting your primary caregiver for your first filmmaking experience.

4. DC- What makes EFN different from other film festivals?

One the one hand, we are extremely serious about the quality of films that we showcase and our commitment to develop talent by offering high value industry rewards, affordable workshops and creating exciting opportunities for emerging filmmakers.

On the other hand, we are unafraid to be entertaining. With stand up comic Mike Sheer as our main presenter, we have an irreverent sense of humour and consciously choose playfulness and a friendly atmosphere to engage with our filmmaker and our audience.

Another aspect that makes EFN unique is that each filmmaker’s Q&A takes place straight after the screening of their film unlike most festivals that have a group Q&A at the end. The filmmakers are thus given the space and attention they deserve and the audience has the opportunity to delve deeper into the filmmaker’s process.

5. DC – Erifili what advice would you give to young aspiring filmmakers?

Don’t be precious about your work and be receptive to (constructive) feedback. This is the time to experiment, to make mistakes and to fall flat on your face. So if the weather was bad on the day you were shooting outside or the main actor is grumpy, get over it quickly and move on to your next film. At the same time, you HAVE to be open to constructive criticism if you aspire to become better. So, choose a person whose opinion and intentions you trust and are difficult to listen to because their criticism rings true. I have found my person: it is EFN’s operation manager and my development producer Ioanna Karavela 🙂

And don’t be afraid to show your film publically especially after a few months in the festival circuit.  You want maximum visibility for your film at this stage of your career.

6. DC- How do you see the EFN evolving in the future?

More programmes with films from all over the world, more opportunities for filmmakers to connect, learn and develop their voices.
We also want to establish a hybrid model where we continue our livestream format and are accessible worldwide whilst running our screenings in London from a cinema as we used to before the pandemic.
Finally, we want to continue to give a platform to more diverse voices from different parts of the world to tell their stories. We have always been very passionate about inclusivity and visibility. At the moment we are offering four very affordable workshops by top notch professionals in funding, cinematography, writing and festival strategy to help emerging filmmakers sharpen their skills and navigate the industry with more confidence. Going forward, we would like to expand these programmes and create even more opportunities for people from challenging  backgrounds.

7. DC- What films being showcased at the EFN Festival would you recommend audiences to watch?

It sounds like a big fat lie but it’s extremely difficult to choose as we are very eclectic about the films we select so most of them are exceptional. But if you put a gun in my head and with no specific order:

8. DC – Who inspired you creatively growing up?

It’s a mashup of classic painters, writers, poets and cartoonists.  I am coming from a visual arts background so I would begin with the classics: Nan Goldin, Van Gogh, Frida Kahlo, Rene Magrite, Paul Klee, Cy Twombly. From cartoonists Moebious, Reiser and  Edica, from writers Dickens, Dostoevsky and Kazatzakis and from poets Kavafis. I have a TERRIBLE memory so I am sure that I am forgetting my most important inspirations.

9. DC- Name 5 of your favourite films from any genre?

10. DC- What is it about film that unites people from over the world to share this creative passion?

I am a visual artist turned filmmaker. From a young age I enjoyed color and shapes and I ended up making mixed medium installations. One day I wrote a silly little script for an experimental video. I borrowed a camera, found an actor and begged a filmmaker to hold the boom. I pressed the shutter button and that was it. I got hooked on the magic of film.

What is the magic of film? On an experiential level, it is the collaboration between different people and the integration of different creative means that make it so unique. You need to work well alone and as part of a system and I find this such a fascinating process. (CONT)

From an audience perspective, I enjoy how film brings us stories from different parts of the world and society. Watching stories of people that are from very different to very similar to me, gives me the thrill of discovery and the reassurance that I am part of the rest of humanity. After watching a great film I feel less alone.

At its best, it is educational without being preachy. No history book or newspaper will give you the same appreciation of African politics and history than a film by the big Sembene.

EFN Spring Edition will take place on 26th April 2021 20:00-22:30 BST on FACEBOOK LIVE. The event is free to attend. Presented by comedian Mike Sheer and curator Erifili Missiou, expect a relaxed, fun and inclusive atmosphere and a night full of cinematic gems.

All Images are copyright of their respective owners.