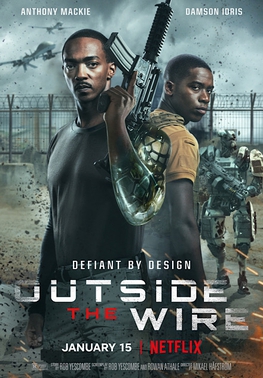 Netflix brings you a original sci-fi/action production set in the not so distant future, starring Anthony Mackie (Altered Carbon) as a mysterious android and army captain, and Damson Idris (Snowfall) as a young drone pilot assigned to a war-zone in Europe to investigate the sale of nuclear weapons in the region.

As they both delve deeper into the investigation, they discover a far reaching conspiracy and agenda that will question their own moral, political and patriotic allegiances. The action is fast and fight scenes impressive, and with the subject matter of man and technology, I believe will prove to be far closer to home for the audiences who will watch this movie with the current climate worldwide. It is by directed by Mikael Hafstrom.

Outside The Wire is currently available to stream on Netflix.