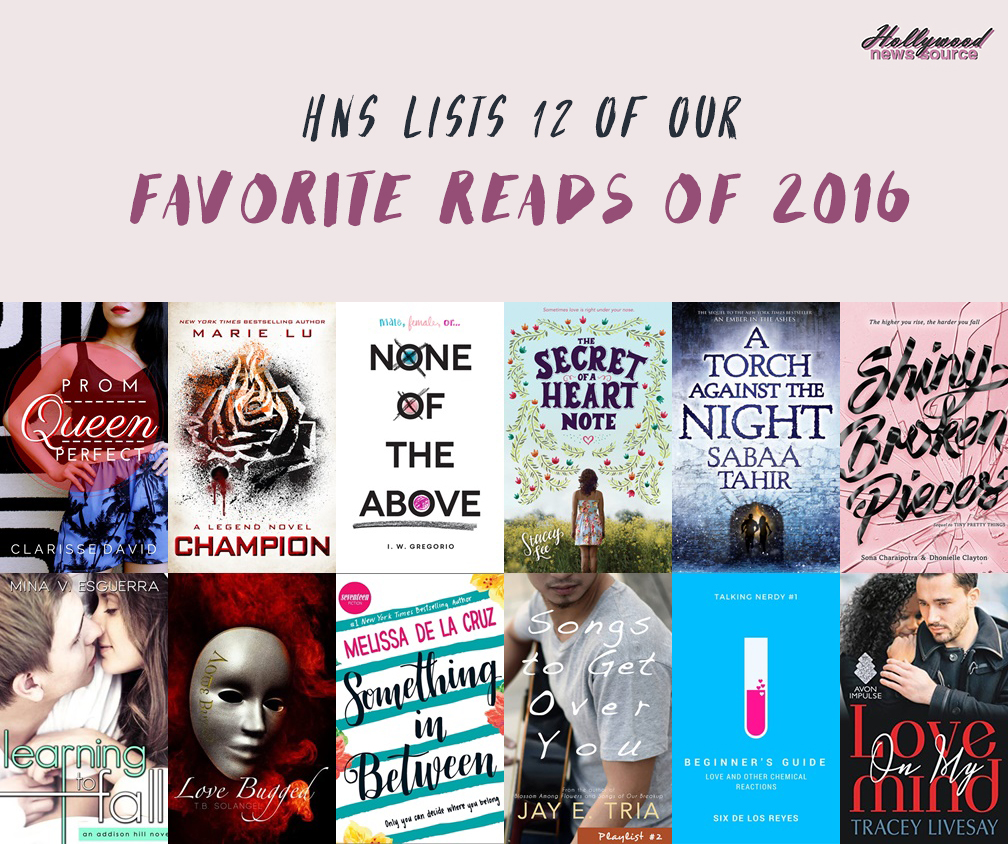 We all can agree 2016 is a pretty disheartening year, and one of the things that saved this chapter out of the year are books. So, today I’m sharing all of the fantastic reads that I rated five stars. They are quite precious, they are ranging from Young Adult to Adult. Most of them were released this year while the others are backlist. Either way, I noticed I tend to gravitate towards stories that explore the growth and journey of the characters. I also appreciate cute romance, and overthrowing oppressive governments. This reader has a lot of facets.

I remiss to mention some of my favorites, I plan on rectifying that by giving an honorary shutout to Turner Series by Courtney Milan, which I binge read earlier this month. We have several characters who refuse to adhere to societal’s standard. I heartily recommend it for its revolutionary plot and well-written romance. And of course, Some Kind of Perfect by Krista and Becca Ritchie which chronicles the end of Addicted series. There were a lot of tears and laughter. If you want to start reading the series, you can see the recommended reading order here. Without further ado, you can see the rest of the highlights of my 2016. An Ember in the Ashes was merely a prelude to the sinister sequel A Torch Against the Night. The story remains about oppression, but unlike the first book this is where readers could vividly see the resistance at first hand. The stakes are higher. There is more gore, and violence.

Without doubt, A Torch Against the Night is a revelation and revolution. Given the political climate right now, this story is more relevant than ever. You can read our full review here. Alex dela Cruz is the ultimate It Girl. She’s rich, smart, fashionista, and most importantly she’s ambitious. She won’t stop at any cost in proving her point. And when her childhood nemesis called her self serving, she accepted the challenge. She will get the Prom Queen’s crown and transform Chrissy, the resident outcast, as her shiny new BFF.

From childhood-archenemies-to-lovers trope. It’s not a secret, that is one of my favorite trope. Prom Queen Perfect delivered everything. It has a flesh out characters, but really, it’s the protagonist that carries the story. She’s not here to be anyone’s stepping stone. She’s very oriented, and is unapologetically about herself. Readers will fall in love with Alex’s journey to self discovery. Perfect for the fans of Tiny Pretty Things by Sona Charaipotra and Dhonielle Clayton. Something in Between would appeal to a chock full of readers. I simply love that this book combines everything I love in contemporary YA, there’s romance, strong political ambiance, racial inclusion, tight knit family and friendship. I couldn’t ask anything better.

Readers will certainly love the romance and Jasmine’s path to self discovery. Highly recommended to contemporary fans that dig Jenny Han’s books. Tiny Pretty Things is a difficult book to read, not because it’s awful but because the suspense will kill you. This series easily become my favorite read of 2016. I think that says so much about me.

What set this story apart from its peers is the non-glamorization portrayal of unlikable heroines. There’s savagery. We get to see them make bad decisions, get messy. There are times you’d question their intent and sincerity. There is a rawness, but we also get to see them stiched themselves back again. We need to normalize this narrative in YA or in any specific genre that have a docile, unrealistic expectation of young girls.

My favorite reading quirks are the subtle weaving of real world issues. The author managed to capture what I was looking for. The ballet world isn’t devoid of colors. They bared the biased discrimination and racism of this environment; and they didn’t erase the existence of PoC who are thriving and defying the whiteness of their profession. It’s pretty spot on. I hope more people would read this series. See ‘Why You Should Read Tiny Pretty Things’ here. Stacey Lee’s third novel raises the bar. Thinking about this book makes me warm and fuzzy on the inside.If you’re looking for a YA book with an exceptional plot, that is charming and heartwarming. This is it. The writing and plot is gripping. We have a unique storytelling, well-crafted characters, family and friendship dynamics, and a love story that would make you dizzy.

Contemporary readers need to scramble for The Secret of a Heart Note. This year I binged Legend Trilogy in one sitting down. It’s one of the best decision I ever did.

Prodigy was first published in 2013, but the politics and the complex writing are something I would proclaim as a classic. It doesn’t get old. I love unmasking the different facets of the characters and their relationship. I admit they are the best thing about this series. June and Day’s dynamic and respective arc would make you root for them. I appreciate how Lu didn’t brush some of my concerns under the rug such as they both just met. The narrative also examines the privilege gap between them. It is an issue and it should be.

What makes Legend trilogy even more timeless is the oppression. It is about the underprivileged, the poor, and PoC. It is a slap to every white dystopian book out there that erases inclusion. I’m here for it. None of the Above by I.W. Gregorio

This book reminded me why I initially fall in love with YA genre.

I love imperfect heroines, the high school drama, that peak moment when the main character realized growing up and coming terms with your skin is a lifelong process. I consumed it. I devoured it. It’s a prime example of all my favorites.

None of the Above did an excellent job at authentically weaving a story that will pull your heartstrings all at once. The story follows Kristin, the main protagonist who recently discovered she’s intersex. It’s her journey coming terms with herself. It crosses feminism, gender identity, sexual orientation, and more. The author integrated it effortlessly, I could really feel the depth of the research. It’s respectfully done.This might be an informative book for readers who don’t identify as intersex. Love On My Mind (Shades of Love #1) by Tracey Livesay

In order to get the promotion she deserves Chelsea Grant has to make difficult choices. When opportunity arises, she couldn’t turn it down. She has to transform the recluse tech CEO Adam Bennett as a “people’s person.” But, there’s a stipulation, the company doesn’t want him to know they hired her.

Livesay knows how to write intelligent relatable characters. I instantly fell in love with the story. If you love Trade Me by Courtney Milan, you’re going to dig this one as well. They have similar story-telling vibes. Do you ever wonder what would happen if a scientist fall in love with a tattooed barista who has a penchant for art? Read it and find out.

The romance is the cherry on top. The main characters, Nero and Kaya have the best build up in all history of buildup. They found familiarity within each other’s company despite their incompatibilities.

Beginner’s Guide is the toe curling romance that includes scientific experiments that involve around kissing. As I’d like to call it, this is the tame modern version of A Week to Be Wicked by Tessa Dare. If you’re still not clamoring for this book, we can’t be friends. You read read our full review here. Similar to every other story, the core morale of this book stems from love. The different form and ideology that goes along with it. Sometimes we confused it into something that it is not.

My story with him was not a love story. As a result, I was severely love bugged.

This story have a penchant for tragic love stories. Solangel crafted a world that view Love as a disgrace and downfall. Yet, people still sought after it. The plot also addresses a profound outlook on humanity, freedom, and all the strings that come along with it.

I love the world building, the characters’ strength, weakness, and relationships. Although, I have to admit this book’s strongest suit is the gripping writing, and biting characters. Steph is an avid reader and a book blogger who recently flunked the last semester of her academic college year. Therefore, she recently decided, she must take on hiatus from the blogging community. In addition, she pronounced, she would participate in the monthly challenge Live Like Fiction.

The task for this month, “Go out with a stereotypical romance novel hero WHO ISN’T YOUR TYPE.”

Conveniently, she met Grayson, who posed as a seminude model for her art class. He is the former co-captain of her university’s rugby team. Athletic, hunky, briskly. She instantly knew, he is the one. Soon after, they get tangled up “living like fiction.” Will they ever find the courage to live their life without the restriction of fiction?

I didn’t expect to fall in love with Learning to Fall. I purposely lowered my expectation because, I adore Falling Hard so much, I thought nothing could debunk that. But, here we are. You can read our full review here. Songs to Get Over You (Playlist #2) by Jay E. Tria

Songs to Get Over You is the standalone sequel of Songs of Our Breakup which means readers can totally read it and they’ll still get the main gist of the story. Though, the first one is an excellent book as well, I highly recommend picking it up.

What makes Playlist such an exceptional series for me is how Tria craft her characters. Sure, the plot is just as gripping, but there’s an enigmatic pull that drew me to her characters. I’ve come to treasure them in a short amount of time. Their banter cannot be missed.

The romance is remarkable. Songs of Our Breakup features an international Japanese actor falling in love with a Filipino rockstar who recently just got out of a seven-years relationship. While Songs to Get Over You features a rockstar who’s in love with her best-friend and a self proclaimed groupie who’s hoping for a second chance. It’s a series stitched with melodies and soulful rhythm-like writing.

What’s your favorite five-stars read this 2016?