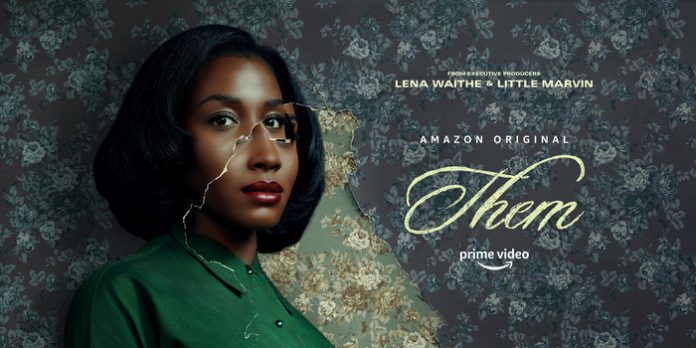 Amazon Prime Video’s new horror anthology, “Them” makes a deliberate turn in typical horror movie perspective and brings forward a layer of terror that viewers may or may not find familiar. The series arrives on Amazon Prime Video, April 9 with 10 episodes, each a day in the life of the Emory family.

The story intends to draw viewers in and introduce them to some of the horrors and terror of being black in America. “Them” was envisioned by Marvin about 3 years ago when the news was filled with stories of black people being shot or otherwise killed/mistreated by cops. During the panel, Marvin explained he used his love of the horror genre to tell a story of this American experience because he felt it was the perfect fit.

Martin created modern characters who would tell this story, set in the 1960’s, through African-American eyes. The story tells us the experience of the Emory family, who appear to be the first African-American family to move into a white neighborhood. Wrapped in the storytelling is an homage to the horror storytellers who inspired Marvin. This brings a sense of familiarity to the viewers, which, in turn, serves to enhance the differences and escalates the sense of fear and foreboding. Because, while the people and places in “Them” may look familiar, how that world is experienced, may not be.

The theme of twisting the familiar into the unfamiliar, ran through each panelist’s answer when they were asked to share some of the creative process for developing their character or special effects makeup. Several talked of the psychology and thought process they needed to research to help bring their character to life. Pill talked about exploring ways to adjust common social mannerisms to convey ill will or threats. Thomas (who is not American), talked about the books he read and the people he interviewed to really understand the feelings and experience of being black in 1960’s Los Angeles. Berger talked about the process of creating “monsters” that were rooted in reality and maybe didn’t look like a monster to most.

For everyone who loves horror, this new anthology is a must. If you like psychological horror, it looks to be a double must. If in the course of watching, you can discern who “them” is, comment and let us know!