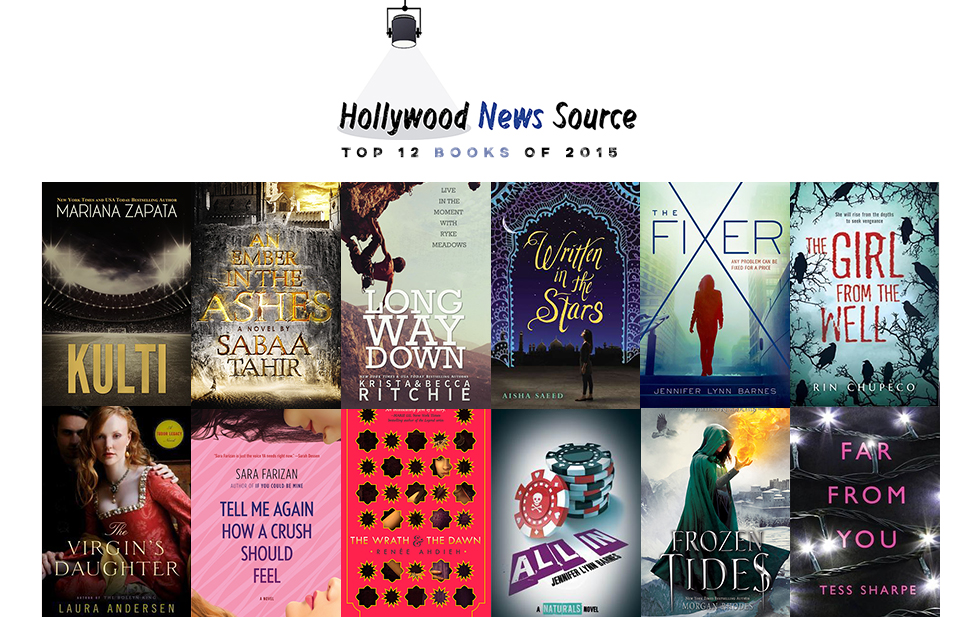 Lately I’ve been occupied with the Holiday season, I forgot to make a rundown of my favorite 2015 reads. In times like this, I could only say there is a popular saying, “it is better late than never.”

2015 has been nothing, but graceful with their releases. This list of books managed to reduce us into tears, made us laugh and ship fictional characters. I believe that was the best way to spend our year! Without further ado, here’s my Top 12 favorite reads of 2015. Long Way Down is the concluding novel of Addicted Series. This book is quite an emotional read for me. I realized, after reviewing all of the books in Addicted series, I have finally exhausted the points I’ve been doing for the past eight books. I would sound like an annoying broken record if I continue to sing the same old tune. But for one more second, here are the finest points of this series: Feminism. Embracing Sexuality. Well written romance, family and friendship aspects. Mental Illness Awareness and more. It is never to late to binge this now. Tell Me Again How a Crush Should Feel by Sara Farizan

Tell Me Again How a Crush Should Feel is the kind of book that I need in my life.

The cast and the whole plot in general is diverse in terms of race and sexuality. The Persian culture is embedded in the story. Leila, the protagonist of the story discussed plenty of times the reasons that put her relationship with her parents in to strain. How she struggles to come out. How she is trapped by her heritage and history. The simple beauty of her culture. She also speaks up about racism. I’d love to read more books where characters of color could express their thoughts on micro aggression and racism.

Tell Me Again How a Crush Should Feel  is timeless, and this is the kind of books we should be reading. All In (The Naturals #3) by Jennifer Lynn Barnes

All in is the third book in The Naturals. In case you are not familiar with the series. It is a YA crime book, starring by gifted teenagers who have a meticulous deduction skills. It  is clever, precisely calculated, and cunning. Perfect for readers like me, who seek books that have a band of misfits, finding love and camaraderie with each other. To spice things up, I am throwing mystery thriller on the equation as well. Written in the Stars by Aisha Saeed

I only have two conclusion after I finished reading Written in the Stars. This is the book I would heartily shove in everyone’s path. This story would stay within me for a very long time, maybe even forever.

Without doubt, Written in the Stars would open doors for plenty of women to share their experiences.  And perhaps, for more stories like these that should not go unnoticed. What a powerful, and life changing read. Thank you to Aisha Saeed for bravely sharing this story with us. The Author’s Note was so touching. Go buy it, everyone. Falling Kingdoms returns with its fourth book’ Frozen Tides. As per usual, this novel doesn’t shy away from Rhodes’ edgy premise. From its rich and detail world building, bloody politics, conspiracy, rebellion, romance, the portrayal of justice, and how there is an ocean difference when it comes to monstrosity and beauty. Frozen Tides is by far the best installment of Falling Kingdoms. It is radical and progressive by all accounts. A well constructed romance about soccer and a woman who didn’t put up with overbearing people who dared to say she cannot do it. This book is extremely addicting, with its slow burn romance and debunking all the odds in this genre. We have a Latina soccer lead who carves a place for herself in the sports world that isn’t very kind to her sex and color. I would recommend this book in a heartbeat. Far From You by Tess Sharpe

Far From You tackled addiction and disability. Sophie is a self-admitted, recovering, addict. Throughout the novel it captures her struggle to come clean. How limited her ability is. How after the accident, the murder, and the rehab seclusion, she developed a wall to protect herself. There is no sugarcoating or romanticizing.  That is one of the things why this novel drew me in. Sophie is an easy character to love.

Similarly, I was entranced with her relationship with Mina. It centers on wanting each other to do best and to be healthy. It’s plain to see their chemistry and long history. It is simply beautiful. And I think we need more of this “friendship” in the Young Adult genre. The Wrath & the Dawn proved itself to be worthy of every praise.  I was initially worried because the plot took almost sixty pages for it to move forward, but after that everything fell into pieces.  I was intoxicated.

The world building is ethereal, and lavish, from fabric to food and to its picturesque surrounding.

The story itself is rich and diverse. Even though it is fictional and set in a fantasy world. Ahdieh said, it is based in Ancient Persia and has a few influences from India. This book also brought new folk tales to the table. I am not quite familiar with it, but regardless of that, I practically devoured it anyway. An Ember in the Ashes is an impressing strong debut that warrants a sequel. Tahir skillfully created a terrifying world and added a realism to it. This book doesn’t shy away from sensitive and truthful situations, some of us experience every day, such as abuse, slavery, sexism, rape, violence and a whole lot more. And one of the many things that struck me with this novel is, it is beautifully written. It is not very hard to be swept off my feet. I was constantly swooning with the words, impeccable world building and the raw aspect of the story.

An Ember in the Ashes is a debut that should not be missed. Without doubt, this book is going to take YA by storm. The Fixer by Jennifer Lynn Barnes

A well written and engrossing book that focuses on Politics. Where do I sign up?

For me the best kind of books is the one that makes me feel intoxicated as if I am drunk in life’s high. The Fixer evokes these feelings for me. I was instantly hooked from the very first eyes I laid on it. There is Barnes’s trademark writing, snark, a group of teenagers bonding, a group of older crowd getting their own interesting, but doubtful spotlight. Aside from all that, The Fixer also explores Politics. There is an alluring portrayal of power, injustice and morality. The Virgin’s Daughter is the first book in a three book series and the spin off of The Boleyn Trilogy. In my opinion you do not have to read the former books to understand The Virgin’s Daughter, but you might as well do it, since the preceding series is equitably stellar.

The first installment in Tudor Legacy explores the what if, Elizabeth the First had a daughter. In this alternate story she did have one Inspired by the well-known Japanese ghost story “Bancho Sarayashiki”, The Girl from the Well follows the story of Okiku. A dead girl who died in the well, three hundred years ago. A vengeful ghost who haunts predatory men. Its apparent Chupeco did a fine research. The Japanese culture is much embedded to the story. There is an explanation, for those who are unfamiliar with certain phrases. It is well written. I love how she writes her words. While I couldn’t vouch for the Japanese representation. I could guarantee, The Girl from the Well is a remarkable debut.

What are your favorite 2015 reads that isn’t include in this list?