We were lucky enough to have been given a one month subscription from a fellow follower of the HomeCon Twitch channel, so the least we can do is pass on some of the amazing interviews that took place.

Check out our coverage of some of the highlights outlined below.

The interviewer Justin Rojas spoke with the Lucifer star about how she got the role as Eve. She revealed that the part was in fact written for her after one of the Lucifer writers saw her on the Imposters a show in which she starred. 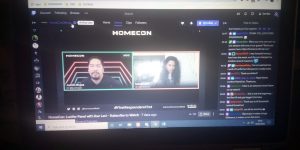 Lavi said that she found the fact that the character was written with her in mind flattering and revealed that it was not the first time that it had happened.

One of the fans asked Lavi what she thought about appearing on a show with such great LGBTQ representation. She spoke about her support of LGBTQ rights and her love that it was represented on the show, her answer was too eloquent to summarise easily but her sentiment is that Love is Love.

Lavi spoke at length about her approach to the character of Eve who she described as childlike. In Lavi’s own words Eve is someone who has looked on from heaven seeing all these exciting things that she herself would like to experience.

On dealing with the stay at home order in LA Lavi tries to remain active staying positive and not watching the news. She prefers to think of the positive things in her life like her family and having a place to live and looking at that on days where she might feel down about the situation.

We learned about Lavi making the leap to the US to pursue her career almost 15 years ago, starting off in New York. She said that she refused to go back home despite things not going smoothly initially instead she kept at it until she could establish herself. 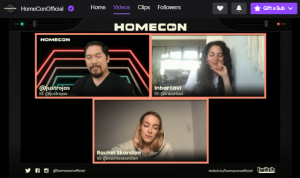 Then out of nowhere the interview was crashed by none other than Batwoman star Rachel Skarsten who joined to talk about Imposters which she appeared on with Lavi.

We learned about Lavi’s character a con artist who tricks people into falling in love with her before running off with all their money. Lavi was effusive in her praise of Skarsten’s performance on the show much to the evident embarrassment of the Batwoman star.