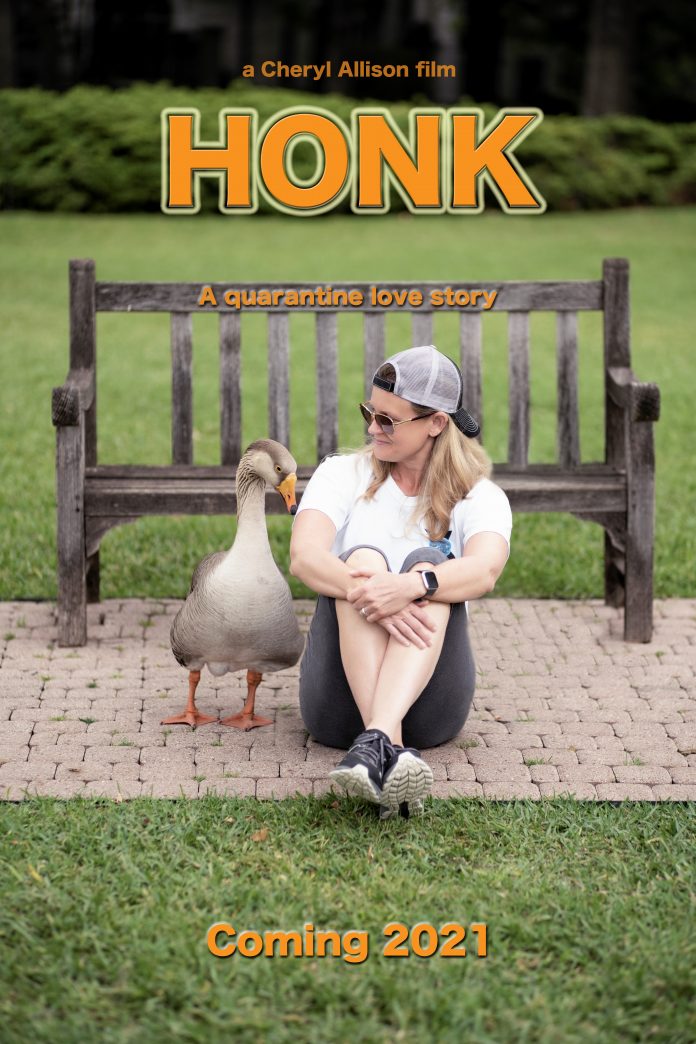 “I think a goose has fallen in love with me.”

In times like these, we are all looking for an excuse to smile. That’s part of what inspired Director Cheryl Allison to begin work on a new documentary about “Honk” – about a goose who recently became her best friend.

It was mid-April 2020 in North Texas, and stay-at-home orders were in full effect. “I would usually go out for walks once a day just to get some fresh air… all of a sudden this goose starts running up to me honking… and he just acted like he knew me!”

At first, Cheryl thought the goose might be territorial – but he was friendly. And when it was time for her to walk home, he wanted to follow. He even tried to follow her across a busy street. Eventually, she got him safely back to his pond – “I ran behind a big tree, to where when he turned around he couldn’t really see me.”

When Cheryl went for a walk the next day, she was more prepared for the big bird’s reaction. This time, she led him on a stroll around the park. She lovingly named the goose “Honk”, for the noise he makes when he sees her. Now, she returns to visit him every day. “He could be on the other side of the pond. And I call for him… and he swims as fast as he can across the pond to me.” (See the video evidence on Honk’s Instagram.)

“I found out that as much as I needed him as a friend, he needed me…”

In the time of social distancing, Cheryl was glad to have Honk to visit. Soon, she started asking others to share their stories about the goose. One man said that Honk had lived there since at least June 2016. For the last four years, he had frequently been seen with a white goose. That goose was last seen with him in late March, disappearing just weeks before Cheryl and Honk became acquainted for the first time.

Honk is a Toulouse goose. As a domestic goose, he cannot fly – so it is clear that someone brought him to this pond. He and his white goose friend were likely dumped here when they became difficult pets. “They need a lot of attention, a lot of care, they are messy. Then families relinquish them.” While exploring the wooded area around the pond, Cheryl located the remains of the white goose and understood more about why Honk sought her out as a companion. He’s a flock animal who is now alone in the park – except for her visits.

As a filmmaker, Cheryl likes to ensure that all of her projects raise awareness about important topics. Her last documentary, “Shatter the Silence”, (now on Amazon Prime) tackled the #MeToo movement with stories from the Dallas/Fort Worth area. Currently, she is editing and directing a documentary feature called “Pieces of Us” about LGBTQ hate crimes with intersecting stories. With “Honk”, she wants to give people a reason to smile. “It’s not political. It’s nothing but just unconditional love. And that’s why I think Honk has gone so viral and gotten into people’s lives.” At the same time, she is embracing the opportunity to inform people about why it’s harmful to dump domestic geese and ducks.

Nearby cars, pet dogs off their leashes, and litter are just some of the dangers Honk faces in his park. Cheryl already had to remove a fishing line with a hook from one of his feet during a daily visit. So now they spend time cleaning up Honk’s habitat. “I’ll go around that whole pond picking up trash and he just follows me.”

Cheryl is also proud to be able to share Honk’s story with children. She and the goose have done several live streams – from a Girl Scout Troop in Connecticut to a grade school class in Waxahachie, Texas. Because the documentary will help to educate children, Cheryl and Honk have earned the support of the Hammerbaucher Grant Fund for the film – as well as funding to develop a children’s activity book about Honk.

Now that’s she’s learned more about her new goose friend, Cheryl is determined to find him a better home. “As much as Honk loves me, and as much as I go visit him… he’s alone there.” She wishes she could buy a farm and relocate with him away from the city. But for now, she is looking at places like Rogers Wildlife Sanctuary – where he can safely live out his life surrounded by companions. Of course, wherever he ends up, Cheryl plans to keep visiting.

Look out for Cheryl Allison’s documentary “Honk” in 2021. She plans to continue filming into the Fall – so viewers will get to see where Honk finds his forever home. In the meantime, be sure to follow Honk on Instagram – @honk_thegoose