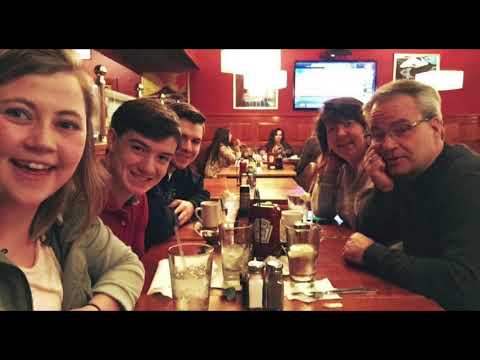 Hollywood News Source writer Elizabeth “Liz” Harkins passed away suddenly on May 21, 2020 from complications related to a cardiac condition. Today as her family and friends gather in Pennsylvania for her memorial service, we wanted to create a space where friends from all over the country and the world can celebrate her and honor her memory online.

Madison Aucoin and Chloe Palka (a fellow HNS writer) – both longtime friends of Liz – are sharing some favorite memories and pop culture recommendations in her honor below.

If you feel moved to, please donate to this GoFundMe in memory of Liz. All funds raised will be donated to the “Fontan FORWARD Fund” at Children’s Hospital of Philadelphia, so that other children born with similar complex congenital heart defects can benefit from the care and research that helped Liz lead such a spectacular life.

Liz was undoubtedly one of the most creative souls I have ever met. She had this incredible way of always seeing the absolute best in people – no matter who they were. I feel like she was one of those people who could just about take any stranger under her wing and make them feel loved and accepted and important- even from one side of a computer screen thousands and thousands of miles away from where that person was. The summer of 2016, I was lucky enough to become one of those adoptees.

I never got to meet Liz in person, but I physically felt like our souls merged at one point. There were nights where we stayed up ‘til dawn talking about movies or books or whatever was happening in our lives – and weeks where we didn’t go two hours without shooting each other a text about bad screenplays we were writing or tweets that reminded us of each other. It was a golden time – and a period in my life I will honestly never forget. She was – is – WILL ALWAYS BE one of my best friends.

We may have slightly grown apart over the years, but we still followed each other on every form of social media possible. I’d still be liking tweets and commenting on her selfies in Captain America gear – she’d still be sending me texts at 2 AM after seeing that I was listening to sad music on Spotify and laugh reacting to anything dumb I posted on Facebook. We still occasionally stayed up and talked all night – planning trips we’d never get to take and talking to each other like our relationship hadn’t missed a beat.

She was a beautiful soul, and I mean that in every way possible. She was funny, she was imaginative, and she literally had the kindest heart of any person I’d ever met. I know she may be gone, but in my head I’ll know she’s with me every time I see a Captain America symbol, or see a pack of red gummy bears or hear a joke that makes me roll my eyes so wildly.

Liz Harkins wasn’t here for the longest time – but the impression she made on everyone she came in contact with will be here forever. I’ll miss you like crazy, friend.

I’ve put off writing this for far too long, because it’s hard to know what to say. How do you sum up a person’s life – especially someone as vibrant and warm as Liz – in a piece that’s going to live online for anyone to read? How can you be sure you’re doing her justice? I think the answer is: it’s not going to be some all-encompassing memorial, because it can’t be. Liz’s life and friendship and impact go beyond anything I could ever write, let alone in one post. Instead, I’m going to celebrate some of the best times we had together and share a few of Liz’s favorite things in pop culture – recommendations that have improved my life, and that I hope will do the same for you.

My beautiful friend Liz Harkins passed away suddenly at home on Thursday, May 21 from complications related to a cardiac condition. I knew that Liz had a lifelong heart condition, but the only way I ever saw it impact her life was that she couldn’t go on one or two rides at Disneyland. As with most of my dearest friends, we met online through the Teen Wolf fandom. While our love of that adolescent werewolf show never went away, our friendship evolved into so much more. From adventures in Los Angeles and Disneyland to calls and texts about TV and working in social media and dreams for the future, Liz was always positive and enthusiastic, and she brought out those qualities in everyone around her.

Some snapshots of favorite memories with Liz – ones I hope I will never forget: taking a Hollywood homes tour on a whim on a hot summer day. Finding out Paul Rudd was in Romeo and Juliet because it was playing on a projector in a bar downtown. Having an impromptu photoshoot with our friend Avery in front of the pink wall in LA. Making sure Liz got her photo with Captain America at Disneyland, and fangirling over how gorgeous the actor was while we stood in line – only to have him go on a “routine perimeter check” and be replaced by a less hot (sorry, dude) actor just as we reached the front. Coordinating when we watched Teen Wolf screeners so we could live text each other our reactions, testing the limits of the exclamation point button, and losing our shit when Stydia finally happened. Long phone calls talking about everything and nothing and plotting for the future. Knowing such a wonderful, adventurous spirit.

It doesn’t feel like Liz is really gone. I wanted to text her about the Teen Wolf reunion and share photos from the baking challenge she inspired me to take and make plans for another LA adventure whenever COVID is finally done. I don’t know when or if her loss will sink in. But I do know that I will think of her often, especially when enjoying the things she loved (just a few of which are below), and I will miss her always. I’ll try to embody a little more of the sunshine she brought to our lives. Here’s to you, Liz – much love, always and forever. We’re with you til the end of the line.

Liz had a knack for knowing immediately when a show or movie came along that was going to be exactly her shit. I have such a vivid memory of this around MTV’s Sweet/Vicious. Liz knew she was going to be obsessed before she had seen even a minute of footage, and she was right. She covered the show online, became Twitter friendly with creator Jenn Kaytin Robinson and the cast, and even wanted to start a rewatch podcast this summer. Watch for girl power (to say the least), all of the funny, and a much needed dose of empowerment.

Liz was baking up a storm during quarantine and living her best life. She completed Bon Appetit’s Basically Guide to Better Baking – a series of ten recipes ranging from salty buckwheat chocolate chunk cookies to sour cream and onion biscuits to a grand finale of cinnamon date sticky buns. She inspired me to do the challenge as well, and she was right – the glaze on the carrot cake did look a little too much like cheddar cheese (though it certainly was delicious).

Liz’s last tweet was about the Teen Wolf reunion, which united the cast in quarantine nine years after the premiere of the MTV series. Some of my favorite memories are live texting her while we would watch new episodes, and I would have given anything to do the same when this released a few weeks ago.

This was another show Liz knew she was going to stan from the very beginning. I think the shows she loved illustrate just what an awesome person Liz was – someone with an awesome sense of humor who was all about uplifting the ladies in her life. I’m due for a rewatch of The Bold Type (and getting caught up on the latest episodes), and I’ll definitely be thinking of Liz.