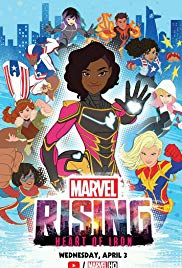 About Marvel Rising: Heart of Iron- Riri Williams feels socially isolated because she is young for a college student. Hala the Accuser destroys the school’s engineering lab and kidnaps Riri’s best friend. Inspired by Iron Man, Riri hatches a plan to save the day.