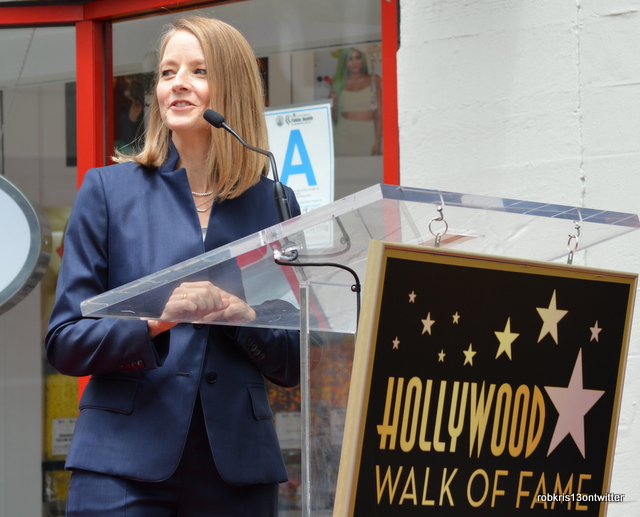 Jodie Foster was honored with a star on the Hollywood Walk of Fame Wednesday, May 4.  The Oscar winning actress, director and producer has worked in films and television for 50 years and began her career at the age of 3. “I didn’t want to have a star on Hollywood Boulevard unless it was in conjunction with a movie I was directing,” she explained. “I don’t know why that was important to me; it seems silly, but that’s why I waited all these years,” stated Foster.

Her ‘Panic Room’ co-star and good friend Kristen Stewart made the introduction prior to Foster unveiling the star. Stewart said Foster “always encompassed what I thought was sort of the prime example of where I wanted to be and she’s been there for me.”

“She’s a baller on every level. It’s out of control,” the 26-year-old went on to say. “She did everything young. She kicked Yale’s ass. She won Oscars. She became a filmmaker herself. She created a family and still is just normal and cool and kind. She cares about people, she is quite the opposite of the type of person that is gravitated towards being an actress.”

Money Monster directed by Foster and starring George Clooney and Julia Roberts will be released Friday, May 13 following its premiere at this year’s Cannes Film Festival.