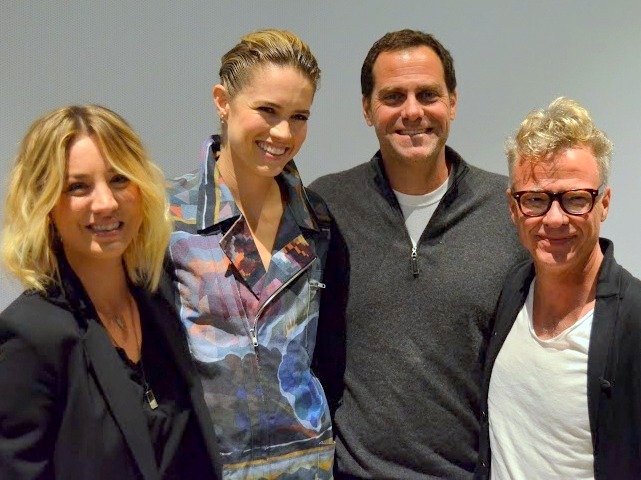 Indie film Burning Bodhi released this Friday in select cities across the US, and we were lucky enough to attend opening night with writer/director Matthew McDuffie and actors Kaley Cuoco, Cody Horn and Andy Buckley. Check out what we learned about the film during the Q&A below. Read our full review of the film HERE.

Synopsis: Lifelong friends stumble back home after high school when word goes out on Facebook that the most popular among them has died. Old girlfriends, boyfriends, new lovers, parents… The reunion stirs up feelings of love, longing and regret, intertwined with the novelty of forgiveness, mortality and gratitude.  A “Big Chill” for a new generation. The idea for the script came about when writer/director Matthew McDuffie’s son came home from college his first semester, and he had a friend who died of testicular cancer. McDuffie realized that he’d had a bad year where he lost a lot of friends, but said he was selfish about it. He realized his son was going through the same thing and there was a universality to it and thought that’s what the movie should be. “We all have to live this chapter and I wanted to portray that,” McDuffie explained about grief.

In the film there’s a lot of close-ups and beautiful, unique cinematography, which McDuffie credits to his DP David Myrick. Together they did a lot of pre-visualization stuff. He was very consciously trying to do “Rebel Without a Cause” as if Cassavetes had directed it. He wanted to do a lot of close-up, handheld kind of stuff as if Cody Horn was Gena Rowlands. The characters weren’t inspired by anyone in particular. Everything starts as autobiography, as your life is. But there’s nobody that’s specific in this. Ember’s character is kind of one of his son’s best friends, but not really. She’s probably the only one that’s like, ‘oh she’s that girl,’ at least in terms of the life force behind her. The characters are works of fiction.

Kaley, let’s start with you if you don’t mind. What brought you to the project? How did they find you? What made you pick this script?

Cuoco: Actually I auditioned like everyone else a couple years ago.

Cuoco: I auditioned a couple years ago just like anyone else, and got the role. Then they lost funding, (some playful shh’s from McDuffie) you know it happens, it happens. But it came back around and it got back and then Matty called me and said, ‘Are you still interested?’ and we met for coffee. And I was like, ‘Yes, I’m still interested; please still give me this job.’

Cuoco: In Reseda. Yeah. And I said, ‘please, please still give me this job. I would really love to do this role.’ And that was it. So I was lucky to still get my hands on it.

McDuffie: Something that’s important, and it’s our favorite story. When she auditioned, I had no idea who she was. Cuoco: Nope, you didn’t. Which was good.

Sidenote: The audience does not believe him.

McDuffie: No, I’m not kidding.

Horn: (jokingly) Wait who are you??

Cuoco: But that felt good… just going in and auditioning and you not knowing. Yeah it worked for me, it was great.

About the ensemble/great cast chemistry and how it felt like everybody was connected:

McDuffie: We rehearsed for about 6 months. (joking) No.

Horn: That doesn’t exist in any world [the long rehearsal period]. No we had one day. And we shot in 18 days. The whole thing was 19 days. So that just shows you what you can do in 19 days. What have you done with yourself in 19 days?

McDuffie: And the chemistry just kind of all evolved very quickly obviously.

Horn: Yeah. We’re all really lucky to catch each other in passion projects and this is a passion project for pretty much everyone involved. So people just came all in, ready to go. And that’s what fuels the chemistry. Plus they’re nice people.

How did you enjoy doing a dramatic role?

Cuoco: Well I think that’s why it was so cool that he didn’t know who I was. Because I think doing comedy for so many years – which I love, and if I do that for the rest of my life, I’ll be happy – but I’m wanting to kind of ease out of that a little bit, and so to be given a chance to do something a little bit different, for people to see a different side of me, because I actually really loved that drama, kind of that dark side, tapping into that. I wouldn’t say I had a blast, it was very hard for me. It was very serious for me because I didn’t think anyone would take me seriously, so I was super excited to have the opportunity. Because I don’t get a lot of those opportunities.

McDuffie: You came out of the gates ready to go.

Cuoco: I was yeah, like she said too, everyone knew we had a short amount of time and there was a lot to get done and I wanted this to be so good. And I wanted people to believe me and know that there was a reason I was doing it, so I was thrilled about it.

McDuffie: The very first scene she shot was this sort of druggie mental breakdown montage thing, with the snot and all that kind of stuff.

Cuoco: Yep. We were in a trailer. A small one.

McDuffie: In a trailer that the art director was afraid to go into.

Cuoco: Yep. It was scary. And you just put a camera on and there was music. And I was sobbing. It was great.

Scott Mansfield: Marshall [the producer] had sent me a YouTube video link to an interview that Kaley had done. And she’d said that the character was a hot mess.

Mansfield: That’s kind of when I knew we should distribute the film.

McDuffie: I’m going to make sure there are MANY hot messes in my next movie!

The one thing that kept on catching my eyes throughout the whole movie was Ember’s tattoos. It doesn’t look like they’re real. What was the thought process on making those specific ones?

Buckley: I thought it was a woman when you said Aubrey. But then you said, “Google him” so that clearly shows I have no idea who it is.

Horn: It was important to me that she had pinups. Because I know a bunch of really cool lesbians that have these amazing pinup tattoos, and that was just a modern take on it.

Did you shoot anywhere else besides Albuquerque? McDuffie: No, we shot on one block.

Cuoco: Literally. We would be like, ‘Which side of the street are we on today?’ We would have to move cars around or something.

McDuffie: On first draft, and I’m a very pro-union guy, but the teamster bill alone was a quarter of a million dollars, and I went, ‘Wow geez, I don’t think we can do it.’ So I rewrote it to take place on Marshall [the producer] and Heather’s block. And we had 9 locations, at least 9 locations, from the caboose all the way to the trailer, we just turned the camera around. So there was no moving. So if anybody wants to do a low budget thing, that’s really the way to do it. Because there were I think two days we were off campus. And the rest was just turning the camera around, and we got to spend all that time working as opposed to travelling.

I really loved the poem and that whole scene. How did that scene come together and who wrote it? Horn: He wrote it. He wrote the whole script actually too.

McDuffie: All those words are mine.

So we’re centering the blame.

McDuffie: Yeah that’s the great thing. Usually as the screenwriter – I’ve been a screenwriter for a while – I can blame anybody else. It’s like usually, “That stupid director! I was a genius until that guy got ahold of it!”

Horn: He directed the film, so that whole scene was all his.

McDuffie: Look this was the most collaborative thing on Earth! And David Myrick. You’re somewhere out there [in the audience]. This was, how many times I’ve watched this and I thought gosh Myrick’s a genius.

McDuffie: Cause there was a light leak from the door, and I was like, “Oh God damnit! Light leak through the door!” But I’ve seen the blu-ray, you guys sent me the blu-ray, and it’s like pristine. It is absolutely gorgeous.

McDuffie: Actually in the quality test, and I don’t know who in your company did it but they said there’s some problem with a light leak. And it’s where the lightning went off when you [Cuoco] were knocking on the door to the trailer. And it was just luck that lightning flashed.

McDuffie also spoke about the gratitude and forgiveness at the end of the film – This isn’t a movie for cynics. That’s what this is about. If you lose people, if you lose a lot of people, you can’t help but learn empathy. At first it makes you hard and selfish because you think no one knows what you’re going through, but eventually you look around and think (whispers) we’re all gonna die. But if you don’t look at that, that’s missed opportunities. There’s blades of grass out there that are fucking awesome and you just have to lie down on the lawn and look at them. So part of it was a purge, a lesson he wanted to learn himself from having gone through all this. So that’s why at the end of the film, she looks straight into the camera and says from now on, nothing but gratitude.

Burning Bodhi is now playing in select theaters nationwide. To see if it’s playing in your city, view the schedule HERE.

For more information on the film, visit their website at: http://www.montereymedia.com/burningbodhi/