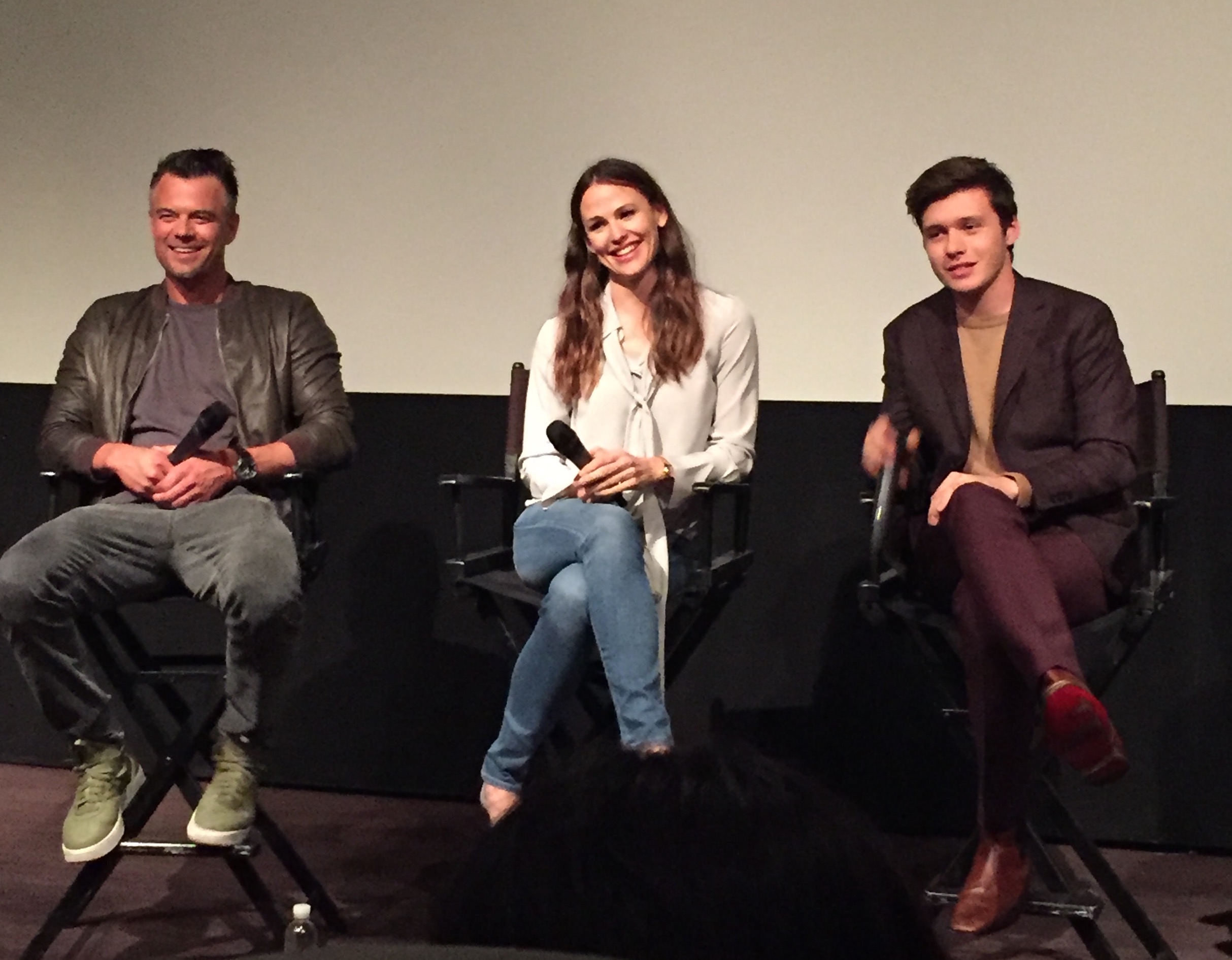 This past Friday, HNS attended a screening and Q&A with Love, Simon actors Nick Robinson, Jennifer Garner and Josh Duhamel where they spoke about supporting the LGBTQ community, their love of Director Greg Berlanti, what they were like in high school and so much more. But first, some photos from the amazing time we had. Fox had a super cool set up of a backdrop of a ferris wheel that looked realistic when you took the photo. The ferris wheel part will make sense once you watch the movie. Here’s a before and after of the set up:

Here are some photos from the Q&A with Nick Robinson, Jennifer Garner and Josh Duhamel:

When you have an ensemble of well-established actors coming onboard for a film – such as with this one – it becomes obvious that the subject matter is one that is going to resonate with audiences. It’s pretty safe to say that each of these 3 actors have lots of options in choosing which films to get involved in, and each had different reasons for choosing Love, Simon.

When asked about the scene in which made them want to do the film, Josh said it was the scene in the driveway between he and Nick that made him want to do the film. This scene is very emotionally charged and comes at a pivotal point in the film, but it also highlights a common response that fathers have when dealing with something as profound as their son’s coming out. “I think that this character represents maybe a lot of fathers out there who found out that their sons were gay, or their daughters. He wasn’t necessarily homophobic, but he was like you said, tone deaf to a lot of things, and probably wasn’t as tuned in as he should have been and learns through the reveal that you know what, it doesn’t matter. I love you no matter what. And I think that there’s something really powerful in that.” Josh said.

“I thought the scene between Emily and her son is just like a template for how moms could handle a moment like this, and selfishly I really wanted to be the one to say it, and I was talking to a friend of mine as I was trying to decide do I try to do this, is this movie going to work, and he said you know this movie would have been really helpful for me when I was growing up, this would have been a big deal for me. And I just said, ok I’m in.” Jennifer explained the moment she knew she wanted to do the film.

Nick seemed to have multiple scenes in mind but highlighted a few – the coming out scene and a dance sequence that he loved. He also spoke highly of Jennifer and Josh and their involvement being a reason he wanted to do the project.

The Making of Love, Simon

The love for Director Greg Berlanti among this trio was unanimous, and they each at some point during the discussion gave major props to him and his influence on making the film what it is. “Greg Berlanti is one of my favorite people in the world,” Josh stated as he likened the movie to a John Hughes film. This is one of two times the film got compared to a John Hughes film during our Q&A, and the comparison was very welcome.

“It’s so important in a movie if you’re trying to reach a younger audience, the music, the overall energy of it, and Greg really understands that. And it doesn’t matter whether you’re playing the parents or the protagonist, you still have to bring that energy into a movie like this,” Jennifer stated.

Nick talked about the love he had in working with Jennifer and Josh on the project and what he took away from working with them. “It really was the perfect casting I think because it was the coolest parents you know, and that’s these two. And they really understood what Simon was going through and it showed too that even when you have the best possible upbringing, best possible scenario, this journey Simon goes on coming out, it’s still difficult, it’s still hard even when you have the best-case scenario.”

Josh revealed that Greg gives you a lot of room to play and lets you find what you need to find when playing your character. To prepare for the role and get into his character’s mindset, he thought about his son. “If this would happen, if he were to tell me this, how would that affect me. And it just took me to a really emotional place. Truly, no matter what, you love your kid. No matter what. And I think that helped me get to that spot.” Nick reiterated Greg being great, “He really made a safe space for everyone.” He later explained that Greg brought the delicacy that the film needed.

Love, Simon is a film that very much focuses on high school issues and finding – and accepting – your identity. There’s a moment in the film in which Simon writes about how it’s not solely about being gay, that everyone has secrets or parts of them that is hard to accept. High school is a time where it can be hard to be yourself, especially if it’s against the norm.

The actors were asked what they were like in high school, when looking at the film is there a character that emulated themselves during their high school days. Nick didn’t identify with any specific clique or group, “I don’t think anyone in high school is the best version of themselves, but I felt like I was kind of the guy who could go group to group and kind of get along, just get by. I don’t know that I would classify any particular clique that I fell into. Just average guy.”

Josh tried to remain neutral here but quickly got called out by Jennifer. “You were the jock!” she teased him. He defensively explained that even though he was into sports, he was friendly to everybody and had a diverse group of friends. “Well I did play sports, but like Nick I had friends with Metallica jackets that smoked cigarettes out back too.” He remained accepting and friendly to everybody.

Jennifer’s high school self was a little different. “I don’t think I even rated a character,” she joked, “I played the saxophone and I danced every day after school, and I babysat a lot and it’s ok.” She was happy and didn’t pay attention to cliques in her West Virginia high school.

The fragility of coming out

Love, Simon isn’t a story about a kid coming out that was met with extreme scrutiny or rejection (though it does touch on this). It’s way more about one gay man’s journey into accepting his sexuality and coming into his new identity… which largely deals with a sense of loss over his former closeted life. He was so afraid of change, of what coming out would do to his life and he wasn’t ready for his world to be turned upside down. He loved his life, his friends, his parents, even his little sister. He knew coming out would change some of these aspects of his life, and that unknown territory is scary.

As for real-life parents Jennifer and Josh, the subject matter in the film was especially close to the heart. “I guess it did make me think about how I would react,” Josh said on if his child comes out as gay, “I truly just want my kid to be happy, passionate about whatever he is and loves, and if it came out he was gay, so be it. If that makes him happy… I have a lot of gay friends. I really don’t care. I just want everybody to be their highest self. And if that’s what it is, that’s what it is. It really doesn’t bother me.”

Jennifer spoke about the advancement of times, and how her kids now say things like they don’t know if they will marry a man or a woman some day. They see a man with his husband and a woman with her wife, and it’s become normalized for her kids, “that door is open in a way that it never has been,” she explained and hopes it continues this way with future generations.

Jennifer often thinks about her friends and how she wishes she could go back for them to help them through the hardship of coming out. “There have been a couple of friends, especially when I was younger, who came out to me, and I think God please let me have had a moment of wisdom. I hope that I did. I was just so filled with love for the whole experience of it.”

Taking your power back

Love, Simon is a film largely centered around one closeted young man’s secret of being gay. He has a classmate that finds out and threatens to reveal this. When someone threatens to reveal your secret, regardless of what that secret is, that is quite possibly one of the most terrifying situations one can experience.

“I think everyone has secrets and it’s sort of like a weight that you can carry around and the more you talk about it, the better it gets. It’s very personal for everyone I think, this idea of coming out with your secrets, and coming out and letting the air in. And I don’t know if there’s a right answer really, for anyone. It’s a very personal thing,” Nick explained. Josh echoed this, and said the more you shine a light on whatever it is that scares you, the less scary it becomes.

At the center of it’s soul, Love, Simon stresses the importance of taking your power back. If someone does something so shady to you, it’s important that you find a way to write your own narrative. When asked what advice Nick would give to someone that is struggling or afraid to come out, he agreed, “Take your power back. It’s different for everyone I think but just be bold, be strong and loud and be happy and confident in what you’re trying to say.” Powerful words from a powerful actor of a film that’s so very needed in the world today.

Love, Simon hits theaters on March 16. I can’t recommend the film enough – it’s a MUST SEE!!