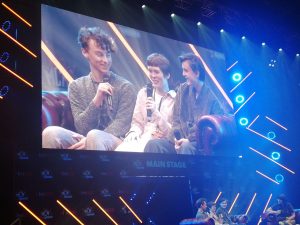 The IT kids were the first to take to the Main Stage to talk to an interviewer and then some questions from the floor. The trio was in attendance for all three days meeting their fans signing autographs and posing for photos.

Lillis is also known for appearing in Sharp Objects the HBO adaption of the novel by Gillian Flynn. Oleff appeared in both Guardian of the Galaxy films as Young Peter Quill while Martell also appeared in Showtime drama Masters Of Sex.

The actors were asked about what things they find scary, advising the actors playing their older selves and one revealed an interesting marriage proposal.

Check out the panel in the video below.

Subscribe to our YouTube channel so you never miss any of our convention, red carpet and interviews.