ETonline caught up with Kellan Lutz to talk about Java Heat, Syrup, Tarzan, Hercules, and trusting his gut, above all, when it comes to picking projects.

ETonline: What attracted you to Java Heat?

Kellan Lutz: The script. I really love action movies; I love being physical, I love being the hero. But there’s not a lot of good ones that are well-written, so when I read Java Heat, it piqued my interest. I was excited to work with Conor Allyn [director/writer], who had such a great, clear vision. Plus we got to film in Indonesia, where I’d never been.

Lutz: I was pretty busy working, but our movie shot on 35 different locations, so it was a blessing to be able to see the countryside and the palaces while filming. It’s a really beautiful place, but to see the poverty in that way blew me away. It’s tough for them, but they always have smiles on their faces even though some of them have so little. But the government really opened their doors and said, “You wanna crash a car on our streets? Sure! We’ll lock the streets down!”

ETonline: The action is really amazing — how did the required physicality compare to your past roles?

Lutz: I’ve done some really cool action movies, I have to say, and it always puts a smile on my face to reminisce about the fight training I’ve done, or learning how to use a trident. But doing a movie where you’re using practical explosions and put fire gel on yourself and feel that blaze all over your body while shooting guns, is just incredible. And everything I learn for every project gets put into the next one. Like for Generation Kill, I learned you are supposed to tuck your shoe laces into your boots because otherwise it’s disgraceful. My brother is in the Army, so when my brother says, “I noticed your laces were tucked in, good job bro,” it makes my day. The casual viewer may not notice, but I take that stuff into every role I do, and it makes me smile even if no one else notices. That education is one of the great things about every new role I take. I am applying previous work to every new character.

ETonline: Syrup is about how you market a product. When it comes to your career, how much do you think about what each role means to the overall trajectory of your career?

Lutz: I’m very hands-on in my career. I think I read more scripts than anyone on my team because I want my heart in every role. Twilight was such a blessing because it opened so many doors and we get so many scripts thrown at us as a result. But I really don’t want to take a role for the money or because someone tells me it’ll make me famous. I don’t care about any of that. I’m blessed to have the ability to be choosy and patient. You know, it’s tough turning down work, especially when your team says it’s a great independent [film] that will balance out your action work, but I just have to listen to my heart. It’s tough to be unemployed and wait for a year, like I did for Tarzan, and then another year, like I did for Hercules, but you feel better at the end of the day because you know it’s right. Life’s too short and I really want to enjoy what I’m doing, otherwise there’s no reason to do it. Simple as that.

ETonline: What made Tarzan and Hercules roles you were interested in playing?

Lutz: They’re icons and growing up, they were the heroes I wanted to be. As a middle child in Arizona, I was creating my own fantasy world. Sure, I loved Marvel and DC, but I couldn’t always read comic books when I was young. I love animals, so Tarzan and his animals or Hercules and his lion or Mowgli in The Jungle Book — those are the guys I always connected to growing up.

ETonline: And what appealed to you about playing Hercules?

Lutz: Hercules, as we’re showing him, is so human. He goes through anguish, doubt, loneliness, lust, love, heartbreak and all these redeeming human characteristics. Even if this script was about a brand new character, I’d still want to play him because of the amazingly human way he’s written. But the fact he is an icon means so much more to the little kid inside of me just freaking out. I mean, this role is proof dreams do come true.

Java Heat opens in New York City on May 10, hits VOD on May 13 and screens in Los Angeles on May 17, while Syrup is now available on VOD, and hits theaters on June 7. 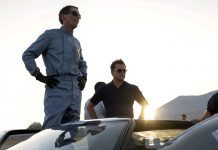