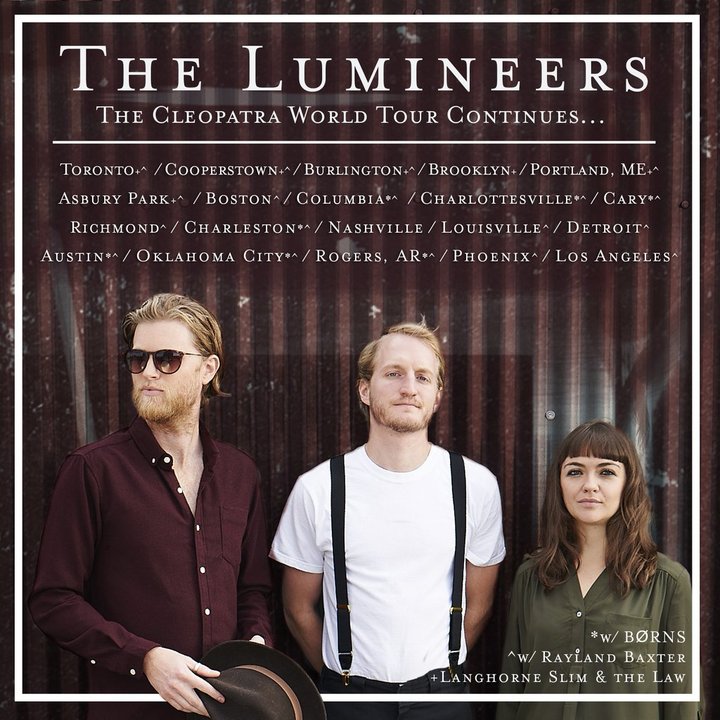 It was a gorgeous evening in Richmond, Virginia on September 16th, and the soothing opening melodies of Rayland Baxter wafted through the air as the endless waves of people sifted into the Classic Amphitheater at The Richmond Raceway Complex. He is the son of multi-instrumentalist William “Bucky” Baxter and his soulful lyrics wrapped up in alternative country melodies remind me of my adolescence spent listening to the legendary James Taylor and Bruce Springsteen. Baxter may be relatively unknown to me until now but he has actually been performing since 2010, recording two full-length studio albums in addition to several EP’s. His set list included a wide range of his material from “Bad Things”, off his 2013 EP Ashkelon, a song Baxter revealed to be about redemption, to “Yellow Eyes” which appears on both his Soho EP and his latest 2015 album, Imaginary Man. As the conclusion to his set, Baxter performed his single “Mr. Rodriguez” with vocal accompaniment from Misty Boyce of BØRNS. If you have never heard his music, I highly recommend you give it a listen! Check out his Website and social media: Twitter, Facebook, YouTube, Tumblr and Instagram!

As the daylight began to fade, HNS favorite BØRNS (aka Garrett Borns) along with his band commanded the stage. BØRNS was concluding an eventful week with the much anticipated release of the music video for “American Money,” in addition to new remixes of the popular single. Directed by Olivia Bee and featuring model Larsen Thompson and gorgeous Gucci attire, the video includes ethereal plays with light and seemingly obedient live moths (I don’t even want to know how many takes were required to get the moths in just the right place at the right time!).

BØRNS’ set was amazing as usual. He opened with “Seeing Stars” from his 2014 EP Candy and continued with six of the eleven tracks from his 2015 LP Dopamine with a few covers in between. BØRNS seems to enjoy performing a rendition of Elton John’s “Benny and the Jets” as well as David Bowie’s “Heroes,” and although they are covers he is an expert at making them his own. Despite being seated farther away than I would have liked, I was able to capture a video of Dopamine‘s second track, “Dug My Heart”.

“Electric Love” marked the spirited end to BØRNS’ performance, and by now night had fully enveloped the amphitheater. It was time for the headliner, The Lumineers!

When they are touring, the trio is also joined by Stelth Ulvang (guitar) and Byron Isaacs (bass guitar). This was the first time I had experienced The Lumineers live and now I realize that their shows are a requisite in every avid concert-goer’s repertoire. The band executed a substantial set-list which I tried my best to document:

Somewhere in there was a Bob Dylan cover in addition to “Charlie Boy”, although I lost track of either’s exact placement. I specifically recall Schultz clarifying “Charlie Boy” to be about his father’s oldest brother whom was killed in the Vietnam War. This was one of the things I enjoyed most about this concert, Schultz’s willingness to share the emotional/personal inspiration behind the music, especially since he is the group’s primary lyricist. “Submarines” describes one of the many fantastical stories Schultz’s great uncle told and “Long Way From Home” is about his father’s death. Funnily enough, I was also pleasantly surprised at the encore when I recognized “Scotland” as the theme song for The CW’s Reign, yet I had never realized that the single was theirs. I recorded video of “Gun Song” from their second studio album, Cleopatra, released in April of this year.

Visit The Lumineers’ website to order your copy of Cleopatra and to see their upcoming performances as The Cleopatra World Tour continues. Many of the venues are currently sold out so do not wait any longer!