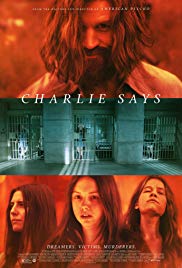 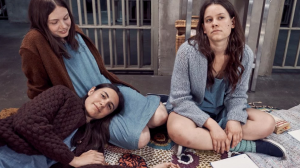 With the 50th anniversary of the so-called “Helter Skelter” murders just around the corner, Hollywood is acknowledging the grim anniversary with movies about Charles Manson and his Family. “Charlie Says” is the first of those movies but despite what you might think, it does not focus on the 2-night killing spree that resulted in the violent death of 7 people. It does not even focus on Manson himself. Instead, the movie centers on Leslie van Houten (Hannah Murray), one of the three “Manson girls” convicted for the crimes and given the death sentence (although the sentence was later commuted to life in prison). Based partly on the book, “The Long Prison Journey of Leslie van Houten” by Karlene Faith, the movie offers viewers a glimpse into the world that transformed a relatively average girl from a middle-class California family into a cold-blooded killer within two years of joining Manson’s Family.

“Charlie Says” was written by Guinevere Turner, a friend of Faith’s before her death, and directed by Mary Harron who had previously worked with Turner. With three strong women influencing the shaping of the film, it offers an unabashedly feminist take on Manson’s role as patriarch of his Family, the 1960’s counter culture and how girls like van Houten got lost in both while looking for, of all things, love and a place to call home. 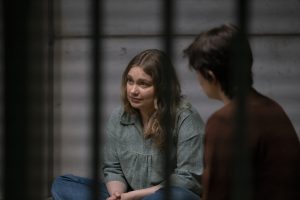 The movie is set in 1972 at California Institute for Women soon after the “Manson girls,” van Houten, Susan Atkins (Marianne Rendon), and Patricia Krenwinkel (Sosie Bacon) have their death sentence commuted. The warden (Annabeth Gish) requests Faith (Merritt Wever), then a PhD student, to come to the women’s confinement area and educate them, since they now have a longer life to live. Faith agrees to do so and offers them academics while also leading them to a mental space where they could at last set themselves free of Manson and his remaining influence on their thoughts and behaviors. The movie tells the story of this renewed self-discovery and the ramifications of admitting Manson was not who they thought he was. We get to explore their past with Manson through flashbacks that illustrate their experience on the ranch and provide insight as to why they believed what they did.

I found the movie fascinating and it really resonated with me.  First of all, in my opinion, Smith did an amazing job as Charles Manson. He was every bit as creepy and shady as you would expect him to be. He looked wild eyed and crazy one minute and caring the next. I think his fans will be impressed with his work here. Second, the story of these women and their journey back to themselves is relevant even today because Manson was not the first, nor the last, person to prey on others and steal his victim’s strength and autonomy in order to enhance his (or her, or their!) own power and sense of self-worth.  Although not all thieves are as maniacal as Charles Manson, the danger they pose is just as real.  For days after I watched “Charlie Says,” I continued to think about it and even did a bit of research for a better, truer understanding of Manson, van Houten and the crimes.

Bottom line: if you think this is going to be a horror film with Halloween-style slashing and blood, you will be disappointed. It does, however, have real-life horrible situations and mindf*cking galore, so that might be enough for you. The killing scenes are difficult to watch but I found several other scenes equally difficult because they offended my 2019 sensibilities. Hey young women! That right there is a good reason to check out this movie, it is a nice reminder of where women were in the social structure not that long ago. Granted, this is a small slice of that social structure but you will still find it mind blowing. It is rated “R” and has cursing, nudity and killing, essentially all the things you would expect for a film about this subject matter.