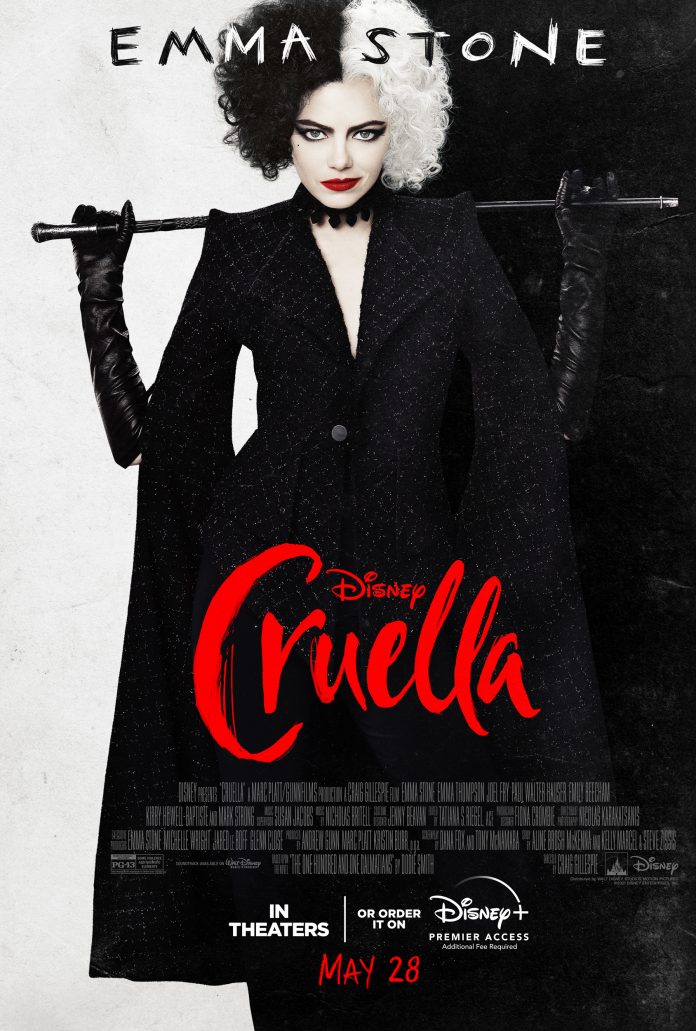 Cruel, stylish, glamorous, fiendish, alluring, evil may be some of the terms you would associate with Cruella de vil as one of Disney and entertainment’s most iconic villains from the 101 Dalmatians books, films and various mediums previously brought to life by Glenn Close, Betty Lou Gerson, Victoria Smurfit, and many more incarnations.

Emma Stone stars as Cruella, where we are taken through her origins about how a innocent girl, Estella, with a love for dogs and dreams to become a fashion designer in London, was met by tragedy and trauma which sets her on the path to become the iconic villain we believe we all know.

We get to meet the various characters who helped shape her, such as Cruella’s nemesis the ruthless, cold-hearted, razor-tongued Baroness played by Emma Thompson. She comes with wit and diabolical flair and runs the biggest fashion house in London, shadowed by her mysterious Valet John (Mark Strong). We get to know some of Cruella’s family and friends that she grew up with and helped her. We meet the loyal Jasper (Joel Fry) and Horace (Paul Walter Hauser) and get to know more about their history and childhood friendship with Cruella/Estella, her former school friend the quirky Anita Darling (Kirby Howell-Baptiste), her mother Catherine (Emily Beecham), and the sassy and scene stealing Artie played by John McCrea. Emma Stone exudes a confidence, class, regal, rebellious and devilish charm as both Estella and Cruella. Only an actress of her caliber is capable of that, and it sometimes makes it difficult to loathe her as the young woman who chases her dreams to become a fashion designer in the face of adversity. Having the courage to be your authentic self is a very endearing and human quality. This is matched by the beautiful and stylish costumes and style Emma Stone’s Cruella embodies, capturing the era of the 1970’s thanks to award-winning costume designer Jenny Bevan and her department. It’s as if the clothes were a character itself – mix in the iconic parts of London like Regents Park, Liberty department store, Buckingham Palace, Portobello Road and many more. The soundtrack for Cruella gives it that extra gravitas that absolutely captures the style, essence and funky period of the 1960’s and 1970’s with some of the most iconic musicians featured such as Queen, Blondie, The Clash, Ike and Tina Turner, David Bowie, Nancy Sinatra, The Bee Gees and many more. It encapsulates the Punk, Rock n Roll, R&B, and Pop of the era. ‘Fire’ by The Ohio Players is a standout song that fits the feature perfectly. Cruella is Directed by Craig Gillespie.

Take a look at the Cruella Trailer below:

Cruella is available to watch in cinemas and Disney Plus Premier Access.

All images are copyright of the respective owners.