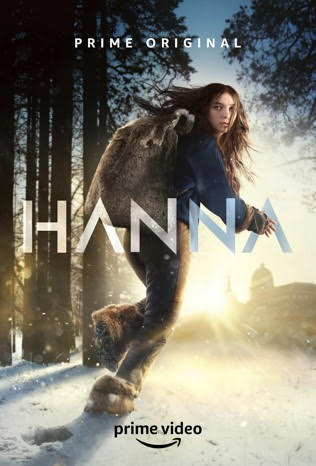 We were lucky enough to score an advanced screener of upcoming series “Hanna.” Read our review below! 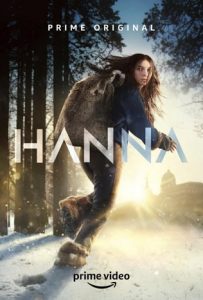 Amazon Prime Video launches a new action-packed drama, Hanna, March 30th. If you are thinking, “Hey, I saw a movie by that name in 2011, I wonder if they are related?,” then you win the #smartypants reader award today. They are, in fact, so related they have the same writer, David Farr. Farr co-wrote the movie and is credited as the writer/executive producer on the series. The series tells the story of a young girl named Hanna (Esme Creed-Miles) who is raised in the forest by her father, Erik (Joe Kinnaman).

Erik is obviously hiding Hanna from something and from the opening sequence we learn that something is actually a someONE, Marissa (Mareille Enos). Erik has Hanna on high alert at all times and he trains her as if she was an elite soldier rather than a teenaged girl.  He keeps her secluded and forbids her to venture past a certain point in the forest, warning her that it is too dangerous to go any further.  As it happens, it is not Marissa or ambiguous “dangers” that prove to be the ultimate threat to their hiding place, it is Hanna’s curiosity and desire to get to know the outside world that does them in. She makes brief contact with a boy and next thing she knows, helicopters are flying in, special forces are extracting her and her father’s fate is unknown.

The show is exciting.  It is Jason Bourne-style action in a 16-year-old girl who can kick ass and take names.  I found the character of Hanna played by Creed-Miles to be just as intriguing as the character when played by Saoirse Ronan, who really did a stellar job. I love the juxtaposition of Hanna being both a hormonal, confused teenaged girl while also being a highly trained soldier who can remain absolutely composed when fighting the bad guys she encounters at a worrisome frequency.

Having watched the first few episodes of season 1, I am relieved to say that from what I’ve seen so far, the series captures everything I found thrilling in the movie. I really loved the movie but please do not worry if you did not see it, the series follows a similar plotline but definitely stands on its own. However, if you did see the movie, you will still be happy as the characters and the storyline now have more time to develop and grow with a less heavy hand than was possible in a 2-hour movie.

Really, the only thing I missed in the series was the EPIC soundtrack which I felt acted as another character in the movie and is one of my favorite soundtracks of all time. I own this soundtrack by The Chemical Brothers and listen to it way too often. You should too. Everyone should. Its so good. But I digress….How will it all work out? What will happen to the people Hanna meets along the way? Did her father survive the attack? Is Marissa the crazy nut job she was in the movie? Watch to learn, my friends, watch to learn.