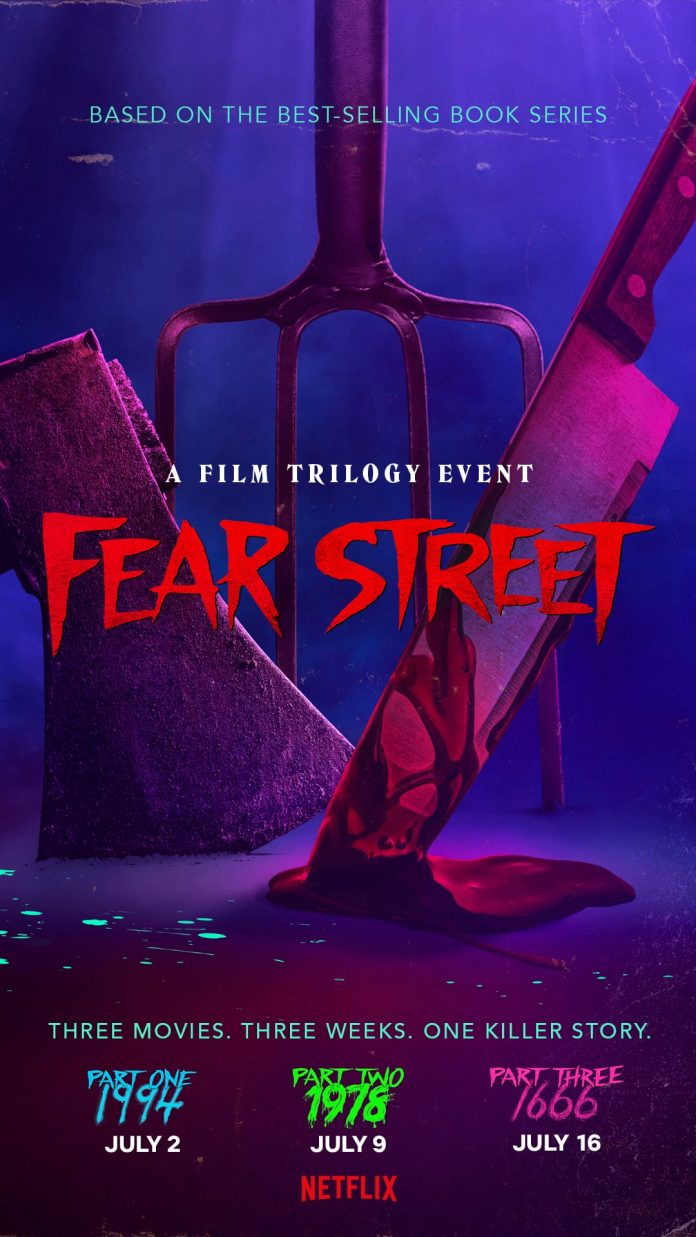 Based on the best-selling ‘Fear Street’ teen-horror books from R.L Stine, Netflix and writer/director Leigh Janiak bring you a trilogy of horror films this summer that tells the story of the teenagers in the small American town of Shadyside. The town has been cursed by an ancient evil and suffered numerous brutal mass killings and murders for over 300 years. ‘Fear Street’ pays homage to some of the most iconic slashers throughout the century, but at the same time does it’s own thing in this TV/Film hybrid format. Think of ‘Fear Street’ as an amalgamation of iconic horrors we know. Now imagine if the events of Scream, Halloween, Nightmare On Elm Street, Psycho, Candyman, Friday 13th, IT, Urban Legends, The Wicker Man, Childs Play, The Faculty, I Know What You Did Last Summer, Salem’s Lot, The Exorcist, and more had all taken place in the same town over the course of a few centuries and not one off events – what would the repercussions be on the people that lived there? And the trauma it would cause its inhabitants, especially the young people and the possible PTSD (Post Traumatic Stress Disorder) they would suffer as adults. We get to examine the events through different points of view, including characters and protagonists that are usually side-lined in the horror genre from specific eras.

In an interview with Collider on YouTube, The Fear Street Trilogy Writer/Director Leigh Janiak mentions the ideas behind the Fear Street Universe, Read below:

” The potential of Fear Street is basically Horror/Marvel, like we are creating this universe were you can have all these different killers, in all these different timelines and timeframes. To me that was part of the excitement of the franchise, I was focused on this right, I just wanted to make these 3 films amazing.”

Part one stars Kiana Madiera as Deena and Benjamin Flores as her younger brother Josh, whom both live in Shadyside. They hardly see their father who works a lot. Deena is broken hearted after a break up, and dreams of leaving the town while Josh is a very smart loner. Their friends are the feisty and fiery cheerleader Kate (Julia Rehwald), the eccentric Simon (Fred Hechinger), and Samantha (Olivia Scott Welch) who now lives in the neighbouring, wealthy, crime-free town of Sunnyvale. The teens come face to face with the evil that has been haunting Shadyside in the form of a skull masked killer who goes on a killing spree. They seek the help of the mysterious local sheriff Nick Goode (Ashley Zukerman). Gillian Jacobs, Darrell Britt-Gibson, and Maya Hawke also star as part of the ensemble. Even after the skull masked killer is stopped, this proves to be only the beginning of the terror as the friends unwittingly open Pandora’s box to the evil that has cursed this town for centuries. This starts the fight for their lives. What makes Part One enjoyable is that you care about the characters and you become curious to find out more as they are engaging, specifically the chemistry between Deena and Sam which resonates on the screen and balances all the other relationships and interactions. Connected to all this is the legend of the witch Sarah Fier and her origins to the curse whom had been hanged in 1666. The musical choices from the Director adds to the installment, picking music from artists of the period that really captured the essence of the 1990’s. “Firestarter” by The Prodigy, “G’z and Hustlaz” by Snoop Doog, “Carry On Wayward Son” by Kansas, “Cherry Bomb” by The Runaways, and “The Man Who Sold The World” by David Bowie were just some of the excellent examples.

After the events in continue 1994, we meet C. Berman (Gillian Jacobs) as she tells the story of the truth behind the massacre at Camp Nightwing in the summer of 1978 and how another mass killing and so-called random act of violence took place, from another possessed Shadysider, and what happened to C. Berman, her sister and their friends. This installment stars Sadie Sink as Ziggy Berman and Emily Rudd as Cindy Berman as we explore their complicated relationship amongst the carnage. We also meet Alice (Ryan Simkins), Tommy Slater (McCabe Slye), Sheila (Eden Campbell), Nurse Mary Lane (Jordana Spiro), and a young and future sheriff Nick Goode (Ted Sutherland). We discover the personal burdens Nick carries because of his own family legacy and his brother Will Goode (Brandon Spink). We find out more about the visceral evil that has haunted Shadyside and we meet some of the campers from Sunnyvale and the contrast/clashes in attitude and outlook they have to each other. We witness the trauma that C. Berman went through and witness the sad, tragic origins of her personal story.

In the third and final installment, in a race against time to save the souls of Shadyside and her friends, Deena is transported back in time to 1666 to witness the beginning of the curse and where the evil originally first began, shown through the eyes of Sarah Fier played by Kianna Madeira and Elizabeth Scopel respectively. As for the young woman who’d been hanged for witchcraft in 1666, we witness her story, her first love, and the persecution, oppression, and heartbreak she had to endure from the town and people that were supposed to protect her and that she thought she knew. She ultimately had no idea the evil seeds that were being sown for future generations, and that love and hate are just two sides of the same coin. It was a good touch that Leigh Janiak had a lot of the main actors from Part One – 1994 and Part Two – 1978 play characters in Part Three – 1666, as I felt it kept that relatability to the audience, as we had gone on this journey with them. We have the opportunity to discover more of the funny but sharp-witted Martin played by Darrell Britt-Gibson who faces issues with Sheriff Goode (Ashley Zuckerman), which reflects on current social problems that are currently ongoing issues in modern society.

Leigh Janiak in another interview with Collider said:

“It really made sense I think, that we got to see these different characters from the different movies back in 1666, because it felt like what we were trying to do in 1666 was show all the ways things went wrong, with similar relationships and similar kinda interactions. Then later on hopefully in the 70’s and 90’s, kinda have a chance to write those wrongs. So that was the core idea behind using the actors over and over again.”

I felt that “Live Forever” by Oasis, “Come Out And Play by The Offspring and “Mo Murda” by Bone-Thugs-N-Harmony, were powerful choices for part three of the trilogy as we go back and forth between 1994 and 1666. They captured atmosphere and matched the timeframe and were a nice eclectic mix of artists from the era. HNS was also at the Comic-Con@Home 2021 for The Fear Street Trilogy Panel, and the recap can be read on our website. Fear Street shows that good and evil are two sides of the same coin in horror.